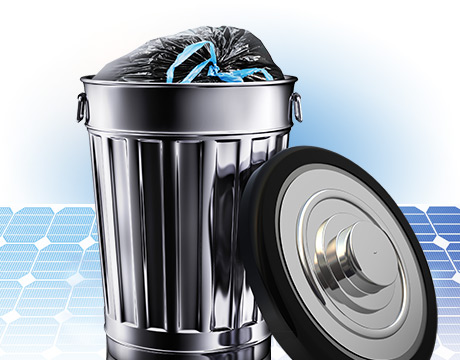 Solar energy still has a problem. Storage. Batteries are nice, but there are losses going to and from chemical storage. Water tanks can help use the light of day to warm our nights, but they don’t hold on to their heat for the long term.

To turn the heat from our summer sun to heat for our winters we may soon be able to turn to our leftovers. There’s no dearth of the stuff. Some 40 percent of U.S. food ends up in the trash, of which 97 percent winds up in a landfill. That’s 33 million tons per year, if you prefer your stats by weight.

There’s gold in those hills of rotting comestibles, in the form of sugar alcohols. They have a high storage capacity, they’re safe, and thanks to our wastefulness, they’re plentiful. “The major problem with using sugar alcohols as heat storage is they are quite slow in terms of its heat transfer kinetics,” says Huaichen Zhang, a mechanical engineer at the Netherlands’ Eindhoven University of Technology. Now Zhang may have found a way to fix that problem.

To answer the question, Zhang ran a molecular-scale simulation, using molecular dynamics modeling methods, to see exactly how the heat transferred from the carbon to the sugar alcohols and vice versa. In 2015, he examined two possible mechanisms. The first, heating the carbon layer with a laser beam, proved too slow to produce any real advantage. The second is more promising: transferring heat from sugar alcohol to sugar alcohol, using the carbon as a sort of heat transfer medium. “So the heat passes through it, instead of transferring into it and out of it again,” says Zhang.

That’s great for getting the heat locked up in the sugar alcohols. But when the time comes to use that heat, we don’t yet know how to get it quickly. “It seems that the higher the storage energy density is, the harder it is to get the energy out,” says Zhang. “These are the major problems we want to solve: To increase the crystal growth speed, to increase the heat power, and the discharge power, so we can get the heat out as fast as possible, and as much as possible and whenever we want it. Currently we don’t know how to do it.”

Though that may sound like a full plate of research, Zhang thinks those problems are eminently solvable and that a real-world application will be available in a not-too-distant future.

“Actually it’s not that far off, if you just want the material,” he says. “To commercialize it, we have a ways to go.”

The major problem with using sugar alcohols as heat storage is they are quite slow in terms of its heat transfer kinetics.Huaichen Zhang, Eindhoven University of Technology