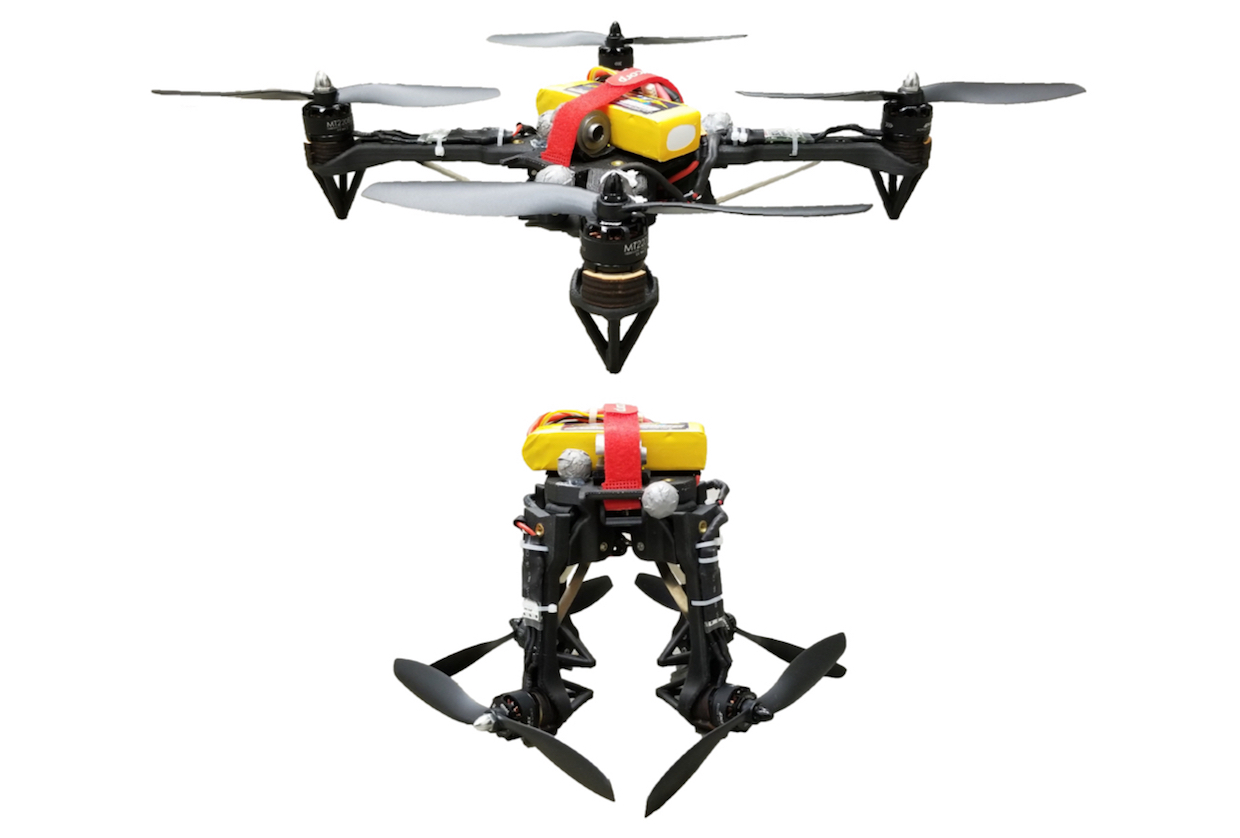 Drone Shifts Shape in the Air

A drone that morphs into different shapes midflight sounds like something you’d see in the animated kids’ show, "The Transformers." Now, researchers at University of California, Berkeley, have brought to life a quadcopter that alters its shape quickly and at will.

A quadcopter is a drone or helicopter that uses four rotors to fly.

This drone takes advantage of aerodynamics to change flight patterns by collapsing or straightening its four arms. With those new movements, it could play a big role in some types of emergencies.

“You could drop two arms to squeeze through a narrow space, like in a collapsed building,” said Nathan Bucki, a Ph.D. student involved in the project. “Then you could go back to normal quadcopter mode. 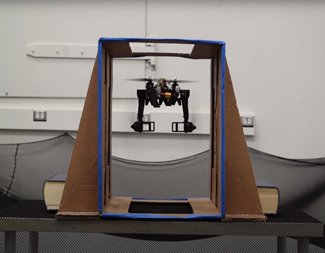 Drone changes shape to enter small spaces and expands within. Photo: UC Berkeley
“And you’re not carrying heavy servo motors around,” he added.

The expanding and contracting arms were inspired by birds, which fully extend their wings to coast and glide, and pull their wings closer in to pilot themselves through narrow gaps, like between branches, said Mark Mueller, a professor or mechanical engineering at UC Berkeley. He is also principal researcher at the High Performance Robotics Laboratory, where the Midair Reconfigurable Quadcopter was developed.

Like bird flight, the drone, with all four arms folded, glides through small openings and perches on tree boughs or fences or power lines.

More for You: Explore New Careers within the Drone Industry

While researchers at other institutions are also at work on shape-shifting drones, the one out of UC Berkeley is the first to use unactuated hinges—also called passive rotary joints—to fold and straighten the arms.

These are the “same kind of hinges you see on your kitchen cabinets,” Bucki said. “They don’t use electronics or motors, just a pin joint.”

The propellers call upon a much-used force in aerodynamics—reverse thrust—to power the hinged arms up and down.

“When they’re unfolded, thrust works so that they don’t move, but when you spin the propellers in the opposite direction, the arms move to the opposite position—up or down,” Bucki said.

Because the UC Berkeley drone’s body is rectangular, the thrust axes can be offset from one another, so the force from one counteracts that of the other two arms, he added. Bucki earned his Ph.D. and now works at Skydio, a maker of autonomous drones in Redwood, Calif.

The wingspan for a similar experimental craft the lab created three years ago measures nearly two feet. With all wings folded, the craft is almost 1 foot wide. The new drone is slightly smaller.

“In my opinion, the most useful thing with it is if you’re in some sort of disaster scenario where you need search and rescue,” Bucki said. “You can fold down two arms, so if you want to fly through a doorway, you can.” 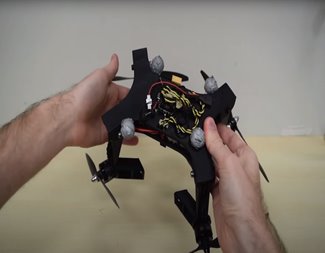 The team used unaccuated hinges to fold and straighten the arms. Photo: UC Berkeley
Their reconfigurable quadcopter weighs as much as a conventional similar-sized drone, he noted.

This version of the drone has been a couple years in the making, Bucki said. A 2019 version created in the lab used springs, rather than actuators, controlled by thrust to pull in and pop out the arms.

“Then we realized by offsetting the arms the copter could hover with the arms folded, Bucki said. “With the springed version, you’d throw it at whatever you wanted it to fly through and it would fly through in projectile motion. This version remains stable and hovers.”

Watch Our Video: FAA and Future of Drone Regulation

From its hover state, the drone can drop vertically into a small opening, such as between rocks. But it must pull in all four arms to fit. When four propellers reverse direction, the reverse thrust folds the arms down. The drone isn’t exactly free falling, though. It can be controlled and straightened by small variations in thrust from the propellers at the end of the folded-down arms.

The drone vertically enters the space in its smallest, arms-in, rectangular position. Inside, it propeller’s reverses thrust fully open all four arms—if the space is big enough. It can open just two arms if it’s not, Bucki said.

But this quadcopter not only flies. It moves objects out of the way in emergency situations, or transports material from one location to another, Mueller said.

When the opposite-side arms are folded down, they push against each other. The arms use the force of that push to pinch against and grasp a box or similar flat-sided object. Those arms stay pinched, while the other two arms lift and fly the copter to a drop-off location. They then lower the drone and the two arms gently release their grasp and place the box on a designated surface, Mueller said.

Could this be the possible future for pizza delivery?

Should the drone be called upon to steady itself up high while awaiting flying instructions, it changes its center of gravity by again folding all four arms. This allows it to balance on a cable or similar structure not unlike a line of crows on a telephone wire.

A paper that details the nonactuator version is currently under journal review, though the lab members have no plans to commercialize their morphing drone. Rather, their intent is to describe the theory behind an unmanned, shape-shifting quadcopter from which others can learn.

“If someone was interested, they could bring this to life,” Bucki said.

Jean Thilmany is a freelance writer who writes about engineering and science issues in Saint Paul, Minn.

Quiz: What Do You Know About Engineering Education?

Bioengineering Blog: Identifying Gastric Disease from the Inside