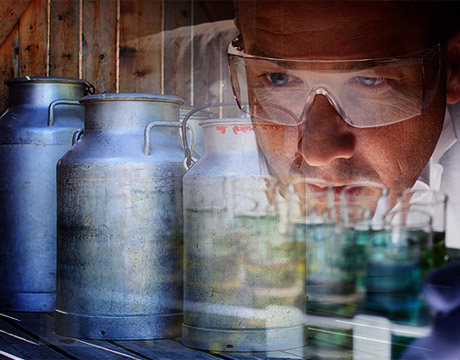 Drinking in the Possibilities

For too much of the world, milk and its critical, sometimes life-savingnutrients seem like a luxury.However, aStanford University team hopes to alleviate this problem with asystem for creating healthier liquidsusing pulsed electric field (PEF) technology.

A finalist for the MIT Clean Energy Prize, the creators of this system have a strong commitment to the milk challenge. “Essentially we developed a new power supply that was small, efficient, and relatively cheap, and we were looking for potential applications for it,” says team member Luke Raymond, who is pursuing his Ph.D. in electrical engineering. “One we saw was PEF. For this, if you have a liquid which has bacteria inside the liquid and you place an electric field through that liquid, the cell walls of the bacteria become polarized and they stretch. If the electric field is high enough, you can actually rip apart the cell wall just by applying this high-voltage pulse through the liquid,” says Raymond.

The concept, he explains, can be applied to milk as a non-thermal method of pasteurization, an alternative to heating up the liquid to a very high temperature and cooling it back down again—a processthat is very energy intensive.

Raymond says that power supply has always been a barrier for PEF technology. “The voltage required resulted in it being inherently very expensive and, if you’re doing this on a large industrial scale, it couldn’t compete with the thermal level of pasteurization,” he adds. The Stanford team, therefore, saw an opportunity to develop a more portable and modular approach.

“Our thought was to bring the pulse electric field process to any kind of liquid, but particularlyto milk in emerging countries. They’re dealing with major problems such as spoilage,” he says. “A lot of milk in those countries isn’t pasteurized and a decent amount of the milk goes bad before it even can get to a pasteurization facility,” he adds.

Raymond explains how the full system works. “It’s the power supply portion which is what we developed that delivers high-voltage pulses, then there’s the electro portion where all the ‘magic’ happens in terms of the liquid,” he says. “That’s two stainless-steel tubes separated by an insulator and one connects to the positive supply of the output, one to the negative. As the liquid flows through this tube with the insulator in between, there’s a pulse of electric fields that is generated between the two stainless-steel electrodes. The liquid then gets exposed to these pulses of the high voltage.

“We’re at about 500 milliliters per minute in terms of the flow rate and would ultimately like to be closer totwo liters per minute” says Raymond. Their goal, he says, is also to create what would purify on the order of 100 liters of water from about the energy stored in a common household 9V battery and they’d like the weight of the product to be roughlyten pounds.

The potential financial impact? “In theory, we would use only 25 per centof the energy of thermal pasteurization and we want to keep the product’s price under $1000,” he says.

He emphasizes that they’re not trying to replace thermal pasteurization, but want to offer an opportunity for those who might need an alternative: “When you consider the importance of milk, anything that can help needs to be considered.”

For Further Discussion
Our thought was to bring the pulse electric field process to any kind of liquid but particularly for milk in emerging countries.Luke Raymond, Stanford University