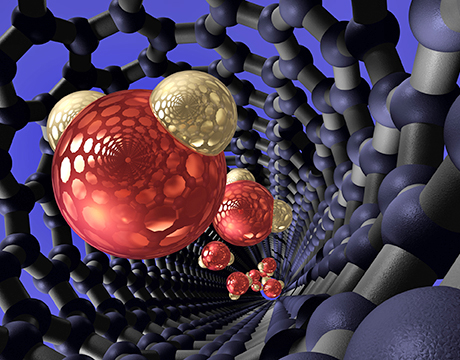 Michael Schrlau was a “dyed-in-the-wool” mechanical engineer throughout most of his formal education, which was not surprising given his love of anything automotive.

If you had asked him 15 years ago whether he would be working in the field of bioengineering, “I would have looked at you cross-eyed,” he says. But as he studied for his doctorate, he began to think about what kind of use there might be for the “cool” nanotube-based probes he enjoyed making.

Fast-forward to today, and Schrlau, assistant professor of mechanical engineering in Rochester Institute of Technology’s Kate Gleason College of Engineering and founding director of the university’s Nano-Bio Interface Laboratory, is working to integrate biological and artificial systems at the micro/nanoscale level in areas, such as nanomanufacturing, nanomanipulation, technology-biology interactions, and biomedical applications.

Most recently in collaboration with the University of Rochester Medical Center, Schrlau and his team have developed a new, more efficient method for gene transfer using carbon nanotubes to deliver fluids into cells.

“One of the most difficult things to do right now is to modify cells,” says Schrlau. “The current techniques either have safety risks or are not efficient. Our technology is allowing a quick, simple method of delivering genetic material, proteins, and particles into cells quickly and safely. For cancer therapy, that means we can deliver cell therapy quicker before it’s too late for a patient. For DNA editing where biologists are coming up with solutions to cure diseases by either modifying the genetic makeup of cells and they don’t have a way to do that, we provide a technology to do that.”

The simple, inexpensive, and efficient process involves inserting biofluids into cells using an array of carbon nanotubes. The arrays are shaped like tiny drinking straws bundled together to spread fluids or molecules to cells over a larger area than has been possible before. In fact, the number of cells reached simultaneously can be in the tens of thousands. In one test of the new nonviral/nonchemical method, the researchers observed that 98 percent of the cells survived and 85 percent successfully received the new genetic material.

This increases the ability to introduce simultaneously more test biofluids into larger and more varied populations of target cells. But there are still some challenges. One of the biggest is manufacturing the devices, says Schrlau. “We need many more for end users to try them,” he notes.

The standard process for removing the membrane and exposing the embedded nanotubes is using reactive ion etching, but there are some throughput issues, says Schrlau. So the team is looking at ways to make a smaller device with less complicated processes and higher throughput. To commercialize the product, “We need to reduce the complexity of the manufacturing process. We are trying to figure out different ways. That’s where mechanical engineering steps in,” he says.

A focus now is on a polishing wet-etch technique that ends up with the same result as reactive ion etching but is much simpler, quicker, cheaper, and results in higher throughput, he says. This will now produce about ten membranes in a week. Although only one is needed to transect hundreds of thousands of cells, because biologists do repetitive experiments, it wouldn’t be uncommon to use a whole set of ten in a week, he says.

The team is looking in the next year or two to be able to manufacture the devices consistently, repeatedly, and in large quantities for a variety of applications. “We are making really good progress because of the polishing process,” Schrlau says. “At the same time, we’re getting preliminary data on the ‘hard-to-transect’ cells — t-cells, stem cells, neurons — three broad areas where we are focusing.”

“With this and with overcoming the production barrier, we will see an upswing in terms of doing longer term studies, more robust studies, comprehensive studies of all cell types,” he says, adding that there will be a lot more variety of cell types that can be transected efficiently.

Schrlau’s mechanical engineering mindset – “There has to be a better way” – is what started him on this career journey. While exploring how to merge technology and biology, Schrlau was learning cell electrophysiology technology from a highly trained, experienced, expert who was beyond the post-doc level. Using a well-established technique, it took the expert months to get a couple of data points.

“I thought about this smart cover slip idea,” he says. “If I had a device or surface where I could put cells on top and be able to inject things in the cells and measure electrical signals, you could do hundreds of thousands of data points simultaneously rather than a couple every few months. Imagine the data that you would gain. I was motivated to expedite biomedical research to help understand the basic unit of life and how disease progresses at the single cell level. There just weren’t high-tech techniques to do that. That’s what got me into this. “

For Further Discussion
Our technology is allowing a quick, simple method of delivering genetic material, proteins, and particles into cells quickly and safely.Asst. Prof. Michael Schrlau, Rochester Institute of Technology