From Leonardo da Vinci’s ornithopter to the Stealth Bomber, engineers have been borrowing from bird wings for centuries. But there’s another part of a bird that’s just as efficient and effective at doing what it does: the legs. Now, a group of roboticists at the Max Planck Institute for Intelligent Systems and the University of California, Irvine, have created a two-legged robot—in fact it’s nothing but legs—that mimics a bird’s walk. Its developers claim it is one of the most energy-efficient bipedal robots developed.

“When you pull a leg up to swing it forward you have make it shorter than the leg on the ground. That’s true for every animal except those that hop,” said Alexander Badri-Spröwitz, who leads the Dynamic Locomotion Group at the Max Planck Institute, in Stuttgart, Germany, and is the lead author of the paper “BirdBot achieves energy-efficient gait with minimal control using avian-inspired leg clutching,” which recently appeared in Science Robotics. “But a leg that’s spring loaded has to work against itself to bend.” 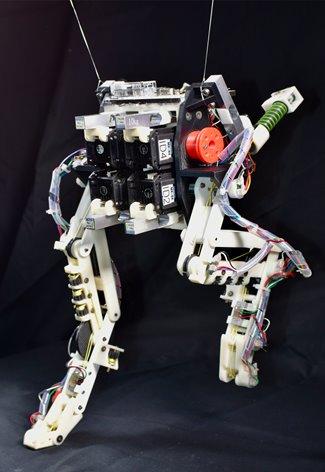 Birdbot's leg mechanism is scalable. Photo: Copyright with DLG MPI-IS and UC Irvine.
Do birds fight the strength of their own spring with every step? It was while toying with an emu cadaver that Badri-Spröwitz thought he had found the answer.

“The foot would completely flex forward and backward, almost 180 degrees, very different from human feet, which are always forward,” he said. In fact, when a bird takes a step forward its feet naturally point backward when the leg is lifted, only flipping forward again in the moments before impact with the ground. Maybe the flip of the foot was operating as a kind of clutch.

To see if he might be right, Badri-Spröwitz set out to make the BirdBot. In rough imitation of an emu, the robot has a single cable connecting foot to hip across multiple joints, turning the leg into a spring. There is only one primary motor on the BirdBot, at the hips, to swing the legs forward and backward. There is no motor that extends the legs. (The robot does house a second motor that flexes the swing leg).

More for You: Robotic Proboscis Offers Firm but Sensitive Grip

The motion of the legs happens automatically and without any additional actuators. It includes the foot flipping from forward to back, and back to forward again; the bending of joints; the cycle of the leg from lifting to forward extension; and the propulsive bounce against the ground.

But for the leg to lift, that single tendon must be released. “You have to get it out of the way in the swing phase,” said Badri-Spröwitz. 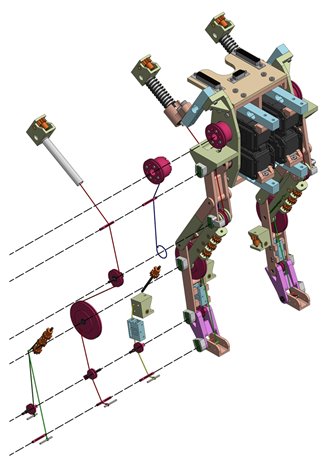 Pulleys of different size hold spring-loaded tendons, which produce the required joint and leg forces. Image: Copyright with DLG MPI-IS and UC Irvine.
The elegance and efficiency of the robot implies that bird legs work the same way, if less simply. They don’t have just one tendon connecting all their leg joints, and their muscles are inserted into kneecaps and bones in multiple places. “So, we couldn’t prove it backward,” said Badri-Spröwitz.

Whatever the BirdBot tells us about bird locomotion, it proves definitively that, for robots, springs are more efficient that muscles. Just as emus are incredibly efficient runners compared to other animals of a similar size, the BirdBot is more than four times as efficient as servo-motor based robots without the clutch mechanism in its weight class.

That means it has real applications in any situation where things need to be hauled or space needs to be traversed. It also is completely scalable. Although a prototype, it further demonstrates principles that may improve capabilities of prosthetics as well as bipedal robots.