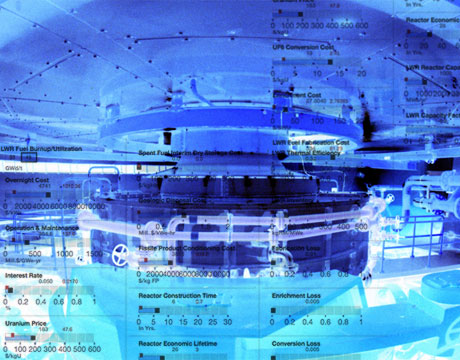 If you’re considering approving—or opposing—the construction of a nuclear plant, how do you go about figuring out exactly how much it will cost so you can come to the debate better informed? The end price per kilowatt-hour comes from an enormous number of variables, which include the price of uranium, the type of reactor, the cost of construction, the cost of waste disposal, and local regulations, among many others. Aside from a handful of highly informed experts, policy makers—and those that might vote for them—tend to have little inkling as to how to determine the bottom line.

“Usually the argument is he-said, you-said,” says Robert Rosner, a theoretical physicist at the University of Chicago and the founding director of the Energy Policy Institute at Chicago. “You can’t get further than ‘I think it’s expensive’ and the other person thinks it’s not expensive.” But now the arguments can get a little more refined. Thanks to Rosner’s Nuclear Fuel Cycle Calculator, a joint product of the University of Chicago and The Bulletin of the Atomic Scientists, anyone, regardless of their level of nuclear knowledge, can look at just how changing variables can determine the end cost of nuclear electricity.

“This thing is designed to spit out fact, fact only,” says John Mecklin, the Bulletin’s editor. “It wasn’t created to support any particular position, but to display the facts.”

And some of those facts turn out to be pretty surprising. For one thing, the price of uranium has practically nothing to do with the price of nuclear electricity. Spikes and troughs in the price of the element get swamped by bigger numbers. Similarly, breeder reactors, built to recycle spent fuel and reduce a dependency on fresh uranium,can be significantly more expensive, and a lot more risky when it comes to proliferation concerns.

Even the apparent high cost of waste disposal has little to do with the cost of a kilowatt-hour. “It’s difficult for people to grasp, but you can see it in the calculator,” says Rosner. The cost of waste in this country is often pegged at 20 billion dollars, a staggering number whose size can turn people against nuclear energy. “That sounds like real money. But how much does that actually cost? Somewhere between a tenth and two tenths of one percent per kilowatt-hour. Those tenths of a penny add up quickly and pay for it quickly. It’s not an issue.”

What is an issue is a little discussed factor: the experience of the people building the plant in the first place. A quick look at recently built nuclear plants illustrates the power of efficiency and nuclear know-how. “In Finland, they hadn’t done this for 20 years. They had to train a whole new workforce. It turned out to be a very expensive proposition,” says Rosner. “This is one of the chief reasons why the South Koreans can price their reactors so much lower than their competitors. They have a very experienced workforce and they crank them out.” Local policies can also have a massive impact on the price of nuclear electricity, along with the feasibility of constructing a plant in the first place. There’s a reason that new plants are going up in Georgia and the Carolinas. The utilities in those states work on an older model that allows them to charge for the cost of the plant before it goes into operation. “You can tell this from the calculator,” says Rosner. “It’s in there.”

If you happen to think the price of construction will go up, the price of waste management down, interest rates will skyrocket, and the longevity of reactors will double, you don’t have to settle for anyone else’s estimation. As Rosner puts it: “The way it’s designed, if you don’t like the numbers, you can change them.”

“Before we put this up, you really did have to have access to the world’s top experts to get anything like this,” says Mecklin. “What we’ve done is provide information: good solid, usable, information. In that respect I think it’s just wonderful, the best thing the Bulletin has ever done.”

The way it’s designed, if you don’t like the numbers, you can change them. Prof. Robert Rosner, University of Chicago