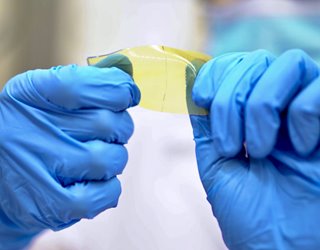 A new polymer slice can flow out of a 3D printer and be made as hard or as soft as needed. Courtesy: Texas A&M University

Our limbs are not solid masses of homogeneous material. From bone to ligament to muscle to skin, we are made of layers of varying hardness. But our prosthetics have little in common with the diversity of elasticity found inside us, and the promise that 3D printing has brought to the field of prosthetics has yet to include any kind of tunability of stiffness.

But now researchers at Texas A&M University and the U.S. Army’s Combat Capabilities Development Command’s Army Research Laboratory have created a new 3D-printable polymer that can be tweaked to be harder or softer, depending on the demands of the application. Those applications promise to be many, from artificial limbs to aerospace skins.

More About Materials Engineering: A New Class of Polymers

Synthetic polymers are traditionally made rubbery with the addition of a hardener, which crosslinks the material’s long molecular chains. “We hijacked the hardener, and attached some molecules that can bond and rebond at a certain temperature,” said Frank Gardea, a researcher for the Army Research Laboratory. The rebond’s ability means the new material won’t simply melt when heated up, like typical elastic polymers. Instead, it flows like a liquid and will set again when cooled. 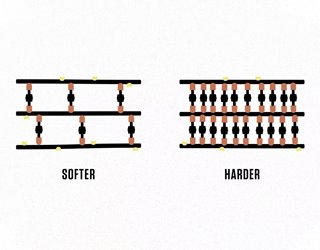 The ability to flow when hot and harden when cool is ideal for all things additive. “The temperature of the print bed is much cooler than the nozzle, so as it’s being printed, it solidifies because of this chemistry,” said Gardea. A nozzle at 248 degrees keeps the polymer flowing, while the print bed receives it at room temperature. The stiffness of the material can be increased by adding more crosslinking molecules. The finished shape has the quality of an injection-molded material; It flows as a liquid, so the end product has no voids.

The new material has another extraordinary property, one that the researchers had not set out to create: It’s self-healing. When performing tensile tests on the polymer, they pushed it to the point of fracturing. “When we put them back in context, we noticed that the surfaces kind of adhered to each other,” said Gardea.

When the two pieces of material are brought together, they immediately stick and begin rebonding. “When a defect forms, it breaks that dynamic bond, and when broken, it becomes active. It wants to resolve itself; it looks for a partner to bond to,” said Gardea. Twelve hours after two halves have been put together, the crack between two pieces will have been completely eliminated without additional chemistry or heat, both to the naked eye or one peering through a microscope. That healing process can be sped up by heating the fissure.

The material is also programmable. With a change in temperature—or possibly some other form of stimulation—the material can morph from one shape to another. Gardea and his team created a hand using their polymer, that, with a change on the thermometer, switches from five extended fingers to a peace sign. “Ideally, the goal would be to have the material do an infinite amount of shapes,” he said. “We are right now at two. We are limited because the chemistry only has two states.”

Prosthetics are a natural for a self-healing material with layers of varying stiffness. But there are plenty of applications that could take advantage of the polymer’s many qualities. An intelligent UAV, for instance, could sense a gust of air and change its shape. Or the material could work as a skin for drones that would provide self-healing as well as structural integrity.

Though such applications are an inevitable reality for a material this remarkable, it will be some time before the polymer gets put to use. At the moment, the researchers have only palm-sized sheets of the material. Said Gardea: “We have to get out of the laboratory scale.”

Michael Abrams is an independent writer based in Westfield, N.J.