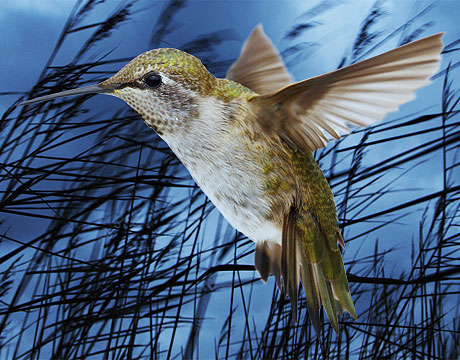 Another Master of Flight

Flight control of small, unpiloted air vehicles, especially, in bad weather, is a goal of Sridhar Ravi of Harvard University. Ravi has studied bumblebees because, although they are very small, their flight remains stable in wind-induced turbulence. Tiny mechanical drones haven’t yet advanced to that stage.

Ravi has now turned his attention to another small, expert flier, the hummingbird. Ravi, a post-doctoral fellow with an aerospace degree, works in the Department of Organismic and Evolutionary Biology in the Combes Lab at Harvard’s Concord Field Station.

He and his team of researchers, working with Stacy Combes, the lab’s principal investigator, conducted intensive research to observe what the bumblebee does to keep itself steady in the air when the wind blows. The study concluded that, while bumblebees have learned to fly stably in turbulence, they still experienced significant translational and rotational fluctuations as compared to flight in smooth flow.

The new study was conducted through collaborations between scientists at RMIT University in Australia and at Harvard. Its observations include the hummingbirds' use of their tails to help maintain stability.

The birds are excellent flyers, able to contend with the challenges posed by adverse winds in the environment. Bees and hummingbirds are both capable of hovering in unsteady winds.

The study presented hummingbirds with smooth winds and highly turbulent winds and assessed the head, body, and tail kinematics of the birds. Ravi said that the hummingbirds maintained incredibly stable head position (moving less than 500 micrometers even when the wind was gusting). The birds also displayed very high flexibility in their wing kinematics and could change the parameters of their flapping cycle independently for each wing.

According to the study, the left wing might do something completely different from the right wing. On average, the birds increased their flapping frequency and flapping amplitude, something they do when flying at high speeds.

The study was able to take drag measurements on the bodies of the hummingbirds and found that in order to hover in turbulence the birds traded off flight efficiency for stability. They fanned their tails, an action that increased drag, but also gave them additional stability in flight.

A video taken for the study shows the birds “powering” their way through the turbulence. When they fan out their tails, they can also to rotate them to arrest rapid disturbances. On average the birds also maintained a higher tail fan angle in turbulent winds that increased their stability.

Ravi said that the complex movements and orchestrations of the tail kinematics allow the hummingbird to successfully maintain stable flight in conditions where man-made aircraft would struggle to say aloft. The wing movements were just too complex to mimic or interpret as of now.

Ravi said that his team’s research has enhanced their understanding of animal flight. He said some of their observations may be transferred to the design of unmanned aerial vehicles, perhaps by developing a mechanical tail, for example, that can serve the same purpose as that observed on hummingbirds.

For Further Discussion
Ravi has studied bumblebees because, although they are very small, their flight remains stable in wind-induced turbulence. Tiny mechanical drones haven’t yet advanced to that stage.