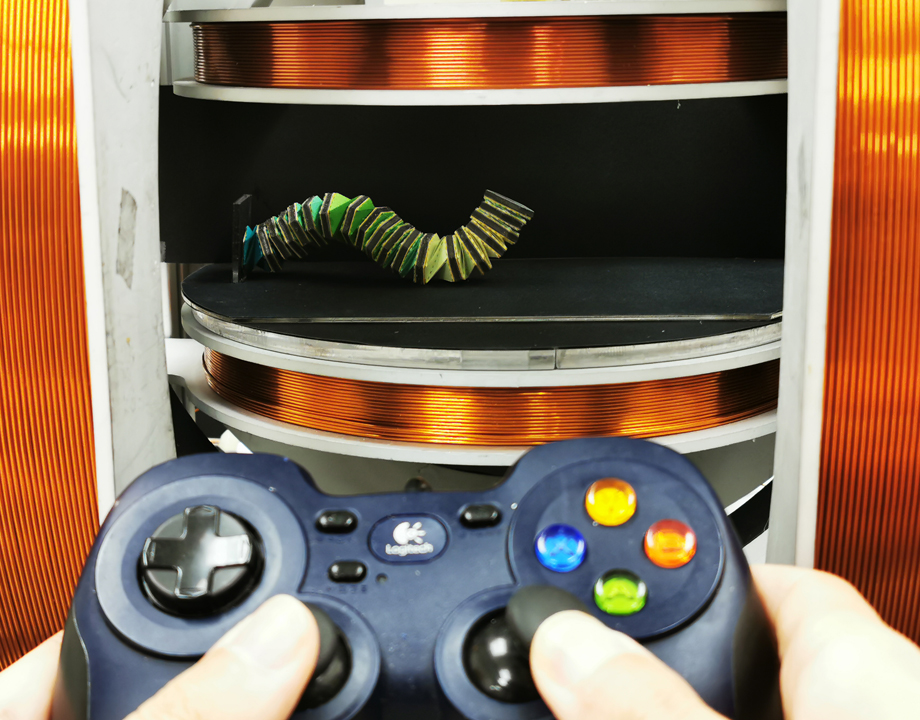 An octopus-inspired soft robot could navigate through the body for diagnosis and treatment. Photo: Zhao Lab, Stanford University

Her team, which includes Shuai Wu and Qiji Ze, who were the leads on this project, has developed a stretchable origami robot that is assembled out of paper-thin hexagon-shaped plates. The plates are intricately laid together to form an omnidirectional arm that can twist, bend, contract, and even grasp objects with an attached claw. The design, which mimics an octopus, doesn’t have any rigid links and joints. The hexagon plates are made out of silicone, making the robot soft and agile with multiple degrees of freedom. Furthermore, those silicon plates are embedded with magnetic particles so that the robot can be controlled with an external magnetic field.

Recommended for You: A Squidbot Hits the Seas

“If we think about conventional robotic systems where you have the motor, the battery, and the controller all together with the actuator, it’s a very bulky system,” explained Zhao. “All of those wires and components really limit the agile motion of the robot.” 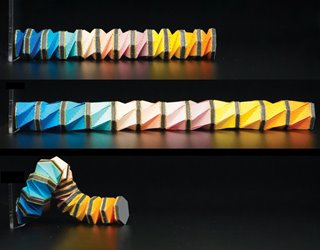 The design, which mimics an octopus, doesn’t have any rigid links and joints. Photo: Zhao Lab, Stanford University
The multiple degrees of freedom and remote magnetic control make this an ideal robotic system for tubular medical devices, such as catheters or intubation tubes, that could be used to reach remote parts of the body.

“For every degree of freedom you add to a system, you would need to add an actuator,” said Zhao. “That's the standard way of looking at it. But every new actuator or motor you add increases the risk that something could go wrong. By just using magnetic actuation, we are increasing degrees of freedom without decreasing reliability.”

If they paired a computer modeling system with the device, they could theoretically move each plate in the system in a different direction, making for all kind of shapes and sizes. Zhao explained that this idea ties directly back to the octopus in one special way.

“The interesting thing about the octopus is that it's not necessarily controlling its motion from one central point,” she said. “It actually has neural systems in each of its arms that act like individual brains. So you could think about this design in the same way; it’s giving us multimodal deformation to interact with an object, to play, to walk, to swim, to do whatever it wants to do.” 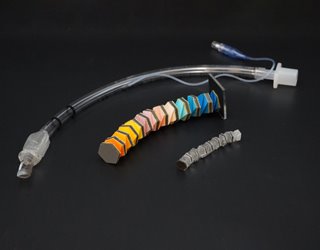 The plates are 3D printed on a standard printer and then assembled or configured. Photo: Zhao Lab, Stanford University
Possibly the only drawback to this system, as is the case with many soft robotics currently being developed, is that it doesn’t have much strength to grasp or lift items like a traditional rigid structure would. But, Zhao explained that because the system would be used for medical devices inside the body, it doesn’t necessarily need to have such power.

The design is also fairly inexpensive to create. According to Zhao, the plates are printed on a standard printer and then assembled or configured without the need for expensive technology and materials.

Take Our Quiz: A Quick Look at Soft Robots

The octopus arm is just the beginning, said Zhao. Her team is eager to create an entire lineup of magnetically controlled devices inspired by origami patterns. They are currently developing a crawler that could be magnetically navigated through sensitive organs and tissues like the stomach or intestine to do diagnosis and apply treatment. They’re also developing amphibious robots that could swim in highly viscous fluids.

“Each of these designs is customizable and could be created on an extremely small scale,” Zhao said. “We are eager to explore how we can utilize the structure and create highly integrated locomotion. The potential is limitless.”