Our cars can see and can do our driving for us. Our phones can hear and can understand our wishes. But our robots cannot yet smell. For search and rescue or drug searches, dogs remain more reliable than machines. That could change as a group of researchers at the University of Washington have created a flying scent tracker, which they call the “Smellicopter.” 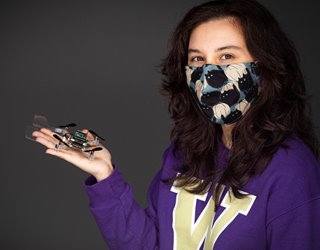 Melanie Anderson, a doctoral student of mechanical engineering and research lead, holding the Smellicopter. Image: Mark Stone, University of Washington
“Sometimes as engineers we can do a lot better than biology,” said Sawyer Fuller, a professor of mechanical engineering at the university who helped develop the aroma honing drone. “But sometimes it makes sense to capitulate—if you can’t beat them join them. Chemical sensing is one area where biology has us beat, certainly at the small scale.

Combining biology with robotics, he and his colleagues have conjoined an odor-sensing apparatus borrowed from the animal kingdom with a drone to create an integrated autonomous scent hunter.

But their sniffer of choice is not the dog nose, but the moth antenna.


Moths are some of the most sensitive chemical sensors of the insects. Thanks to some 200-odd million years of refinement, they can find flowers or mates miles away. They are also easy to breed and handle. The Manduca sexta hawk moths used by the researchers are palm-sized with antennae that are roughly toothpick in diameter. The moths were anesthetized in a refrigerator before researchers detached the antennae, which stays biologically and chemically active for four hours. 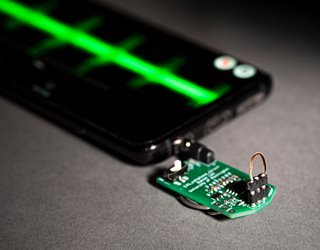 By adding tiny wires into either end of the antenna, the researchers were able to connect it to a circuit and record its responses. Image: Mark Stone, University of Washington
Researchers connected the antennae to a circuit board with tiny wires placed at either end. They attached the antennae sensor to an inexpensive off-the-shelf quadcopter to create the device. When the antenna picks up a scent, it sends an electrical signal to the circuit board that directs the drone according to a simple algorithm.

“When you smell something and there is a wind, you can always assume the source will be upwind from you,” said Melanie Anderson, a doctoral student of mechanical engineering at the university, who lead the research. “Insects use this information. If the wind is coming at them and they smell something, they go upwind. If they lose it, they cast crosswind until they catch it again, then go upwind.”

The smellicpoter does the same thing, using protocol that mimics moth movements. It first moves a predetermined distance to the left and then to the right if nothing is detected. It moves toward the odor when it finally does detect something. “The big challenge was how do you know which way is upwind,” said Anderson.

Editor's Pick: How Long Can a Drone Stay in the Sky?

Because off-the-shelf wind flow sensors don’t fit on a small drone, researchers found a simple solution borrowed from the weathervane: two plastic fins placed on the back of the drone keep it oriented so it’s always facing into the wind. It flies side to side and infrared sensors allow it to avoid obstacles. It also uses a camera to view its course.


The drone is not yet able to register specific scents, only the overall presence of one. When the strength of scent detection reaches a certain threshold, the drone knows to follow it. Moths are hyper-attuned to pheromones and floral scents, so the researchers are using the latter to lure the Smellicopter. Gene editing would allow the antennas to respond just as strongly to other chemicals.

Recommended for You: Drone Jet Fighter on the Rise

The overarching goal is to enable the drone to locate disaster survivors, pinpoint chemical leaks, or find the source of greenhouse gases.

As it stands, though, the Smellicopter’s potential applications are narrower. “We’re at this bottle neck: we can’t apply it in real-life scenarios because all it smells are floral scents,” said Anderson. One option would be to add floral scents or moth pheromone to natural gas, so the drone could find leaks. “Or, if you were searching for someone wearing very strong perfume, you could do that.”