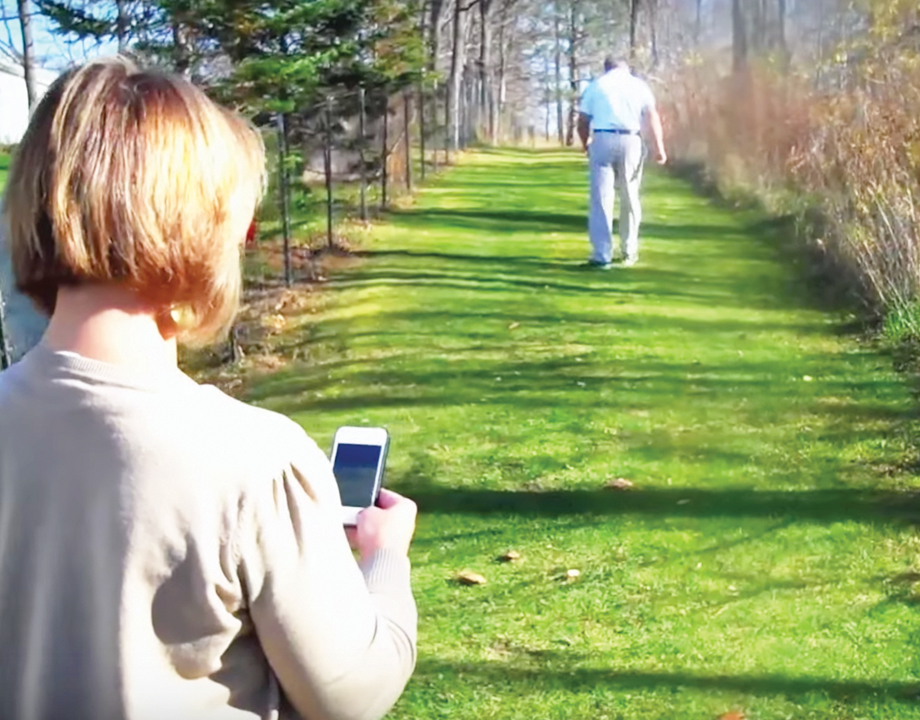 A GPS tracking device in a shoe’s insole ensures caregivers can always track loved ones with dementia. Credit: GTX Corp.

Though former professional boxer Ray Ciancaglini suffers from Dementia Pugilistica, he often walks and hikes around his property near Seneca Lake in upstate New York. But his condition—a neurological disorder that affects boxers, football players, and others who have received a number of untreated concussions—means his wife, of course, worries during his strolls.

“Our property is beautiful, but the beauty comes with hazards,” Patti Ciancaglini said, citing the farmland that surrounds their land and the state park within walking distance.

She recently adopted a unique type of GPS tracking technology to map her husband’s whereabouts from her smartphone or desktop. GPS SmartSole, from GTX Corp., looks pretty much like a basic orthotic, or shoe insole, though it contains the tracker that makes use of Internet of Things technology.

While they may leave behind other tracking devices, people are unlikely to wander without wearing shoes, even if they suffer from dementia. That’s due to procedural memory, the part of our long-term memory responsible for knowing how to perform certain motor skills like walking, riding a bike, or putting on your shoes before you go outside, said Patrick Bertagna, GTX Corp.’s chief executive officer.

Patti Ciancaglini’s experience bears that out. “Ray may not have thought clearly enough to put on a coat, but I know he’s put on his shoes,” she said.

The SmartSoles include a custom-engineered circuit board and antenna, as well as firmware, all encapsulated within a military-grade material, Bertagna said. The GPS inserts can be placed inside the person’s regular shoes. The wearer probably won’t realize the GPS SmartSole is in the shoes while they are being tracked from a central monitoring web site, Bertagna said.

While they may not seem to resemble each other at first blush, GPS and the IoT are increasingly dependent upon each other. The IoT uses sensors to monitor hardware for real-time information and data about device operations, while GPS provides the hardware or object’s physical coordinates.

Reader's Choice: Quiz: How Much Do You Really Know about IoT?

GTX embeds IoT sensors into small units that can be worn or carried. The units receive information from GPS and communicate it to a GTX proprietary IoT platform that resides on the company’s servers and that can be checked by users via a website. The IoT also tells GTX the wearable technology is available and working as it should.

In another move to add intelligence to insoles, GTX Corp. is working with Veristride Inc.—which makes wearable devices to sense a person’s gait—on biometric insoles that would use tiny sensors, artificial intelligence, and algorithms to analyze a person’s gait and predict a fall, Bertagna said.

The Veristride insole currently uses custom sensors at the foot and biomechanical analytics to provide feedback on how people walk and move. As the person moves their foot, the sensors send information to a transmitter tied to a SmartPhone app, said Stacy Bamberg, Veristride’s chief executive officer. She’s also a professor of mechanical engineering at the University of Utah.

The information helps people improve their gait. Amputees, for example, often need gait training as they relearn how to walk, Bamberg noted.

More for You: Quiz: What are the Top Trends in Wearable Technology?

But gait technology is also useful to predict falls, medication reaction, undetected stroke, and early prediction of dementia, Bertagna said. Being able to accurately monitor changes in a senior’s gait or stride or activity levels can have a major impact on their health. A change in the way a person walks could predict a fall, he adds.

The Veristride technology would be included in the SmartSole platform and be tied to GTX’s Internet of Things platform, Bertagna said.

The SmartSoles are already providing peace of mind to Patti Ciancaglini, who pointed out that the easily hidden GPS device gives her husband autonomy while giving her peace of mind, all because Ray has donned his shoes before heading outdoors.