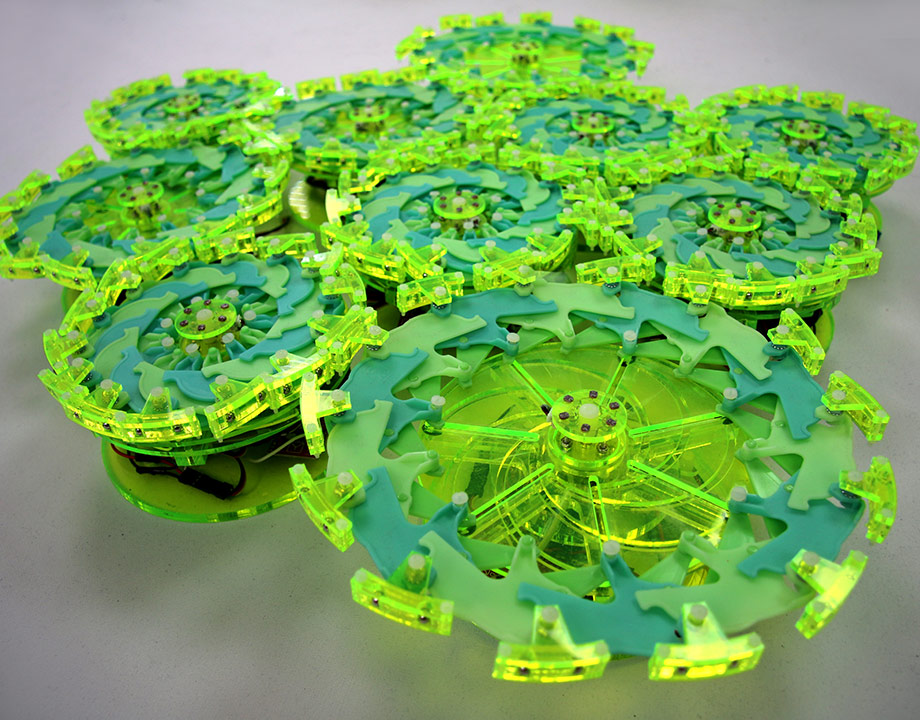 A Self-Aware Robot that Repairs Itself

Hod Lipson has a vision of a world in which robots are totally self-sufficient and do not need managing by humans.

“There is no doubt that robots are going to be a big piece of our lives in the future,” said Lipson, professor of mechanical engineering at Columbia Engineering and director of the Creative Machines Lab. “We cannot exist in a society in which we humans have to take care of robots. There are going to be too many robots.”

That belief—coupled with recent research from his lab—gives him hope that his vision could eventually become reality. The research takes a totally different approach to creating a robot; it demonstrates the possibility of making a robot composed of many loosely attached components so that there is no single point of failure and no centralized control. Taking a cue from biological systems, the sum of the parts is vast in complexity and abilities … but composed of simple parts.

The project was in collaboration with MIT, Cornell University, and Harvard University. It produced what the team calls, a “particle robot,” named thus because the components are individual disc-shaped units, or particles, loosely connected by magnets around their perimeters. The activity of each particle can expand to 9 inches and contract to 6 inches. Particles cannot move independently, but their precisely-timed, coordinated motion allows the particles to push and pull one another, then move toward a light source enabled by on-board sensors. Each particle also houses a battery, a small motor, a microcontroller, and a communication component that sends and receives signals. 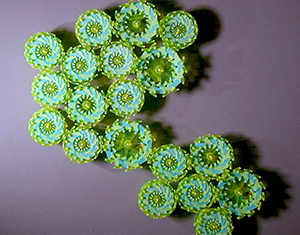 A cluster of particle robots moves toward a light source. Photo: Columbia Engineering.
In a recent paper published in Nature, the researchers demonstrated a cluster of up to two dozen real robotic particles and a virtual simulation of 100,000 particles moving through obstacles toward a light bulb and transporting objects. Although the particles are attached, they don’t rely on one another to function, and thus can complete tasks, even when a number of them malfunction.

Despite extensive experience and previous work, the researchers faced numerous challenges. “Many times in robotics the challenges are actually, sort of, hidden,” Lipson said. “One of the biggest challenges we struggled with, for quite a while, is how to get these parts to commit to each other reliably, to adhere physically to each other, the ways cells connect to each other, how they glue to each other to form tissue. That is a big question in biology, and it is the same issue in robotics.”

After trying dozens of different ways, from vacuum adhesion to Velcro to glue to electro-adhesion, “you name it, all kinds of things,” Lipson said, “we ended up with this ingenious idea from first author Shuguang Li, a CSAIL postdoc at MIT.”

His idea was to put tentacles all around the robots and, at the end of each tentacle, a little magnet. If magnets were placed directly on the robot, that connection was too rigid and the robots could not move. When you put the magnets on little hairs, however, it allows a connection that is flexible, and also allows the cells to grow, expand, and contract, and yet remain connected.

“That is not something anybody notices. It is like an afterthought,” Lipson added. “That was one of those things [looking at it] from a mechanical engineering point of view that suddenly enables you to [proceed]. If you can’t figure out the adhesion, then none of the rest matters.”

More than a decade ago, researchers in Lipson’s lab, who study both the structure—or body—of robots as well as the brain of robotic systems, began thinking about whether there are other ways to make robots, based on the idea that a robot would not be monolithic. The robot would be made of many small components, and not each with a specific function or specific identification as practically all robots today are made. The benefit: if one part failed, the others could carry on … and even repair themselves.

“It could make a copy of itself, sort of like a robot made of Legos that—given parts—could build another robot,” he said. “We humans are made of amino acids that involve Lego-like building blocks, and because of that we can build copies of ourselves.”

One previous project along that line of thinking led him to explore self-replicating robots, a project that involved a machine made of four cubes that built a copy of itself in minutes. That was revolutionary at the time because of the belief that only software could replicate, not a physical machine, he said.

Lipson likes to describe the particle robot in terms of “Gray Goo,” nanotechnology pioneer Eric Drexler’s dire end-of-the world scenario popularized in science fiction when self-replicating robots destroy all materials on Earth by feeding on them and producing replicas of themselves in his 1986 book “Engines of Creation.”

“Our robot is still fairly primitive, but now we know that this fundamental robot paradigm is actually possible,” Lipson said. The team created the first particle robot with shoebox size cells to demonstrate the principle idea. The next step is miniaturizing the components to make a robot composed of millions of microscopic particles.

You May Also Like: How to Teach Soft Robot Navigation

“Trying to move to cells that are about the size of grains of sand makes all these issues even more challenging but the opportunities are much greater, millions of particles to come together to form amorphous strips. That’s the number one thing for us,” said Lipson, who does not like to talk about timeframes.

“It may be 10 years or 50 years or 100 years, but robots are going to be a big piece of anything we do,” he continued. “We have to think about robots more in a way like biology works than the traditional designs. We have to have robots that can take care of themselves, robots that can repair themselves, that can adapt, that can heal, that can improve, and that can recycle themselves to make newer robots. It is all toward a self-sustaining robotic paradigm. In the long term it’s inevitable. This is not what the person on the street cares about now because robots are not a big piece of our lives, but they are going to be very soon.”