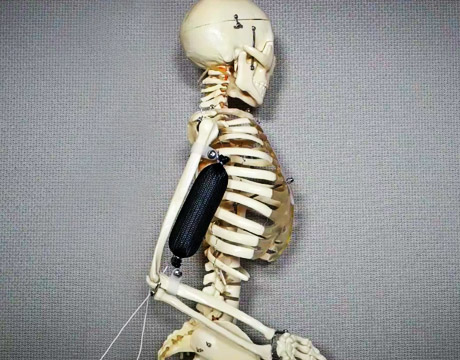 Researchers at Columbia Engineering believe they have cracked the code to one of the biggest challenges in creating untethered soft robots, a breakthrough that could add new functionality and capabilities to tomorrow’s machines.

A group in the Creative Machines Lab led by Hod Lipson, professor of mechanical engineering at Columbia University, has developed a synthetic soft muscle tissue that doesn’t require an external compressor or high-voltage equipment to expand, as previous artificial muscles had. Soft robots are of special interest for situations from factory assembly lines to medical care to home care, where robots are in direct contact with humans.

“Without a strong soft muscle, there is a limit to how much you can do with soft robotics,” Lipson says.

The self-contained soft actuator exhibits characteristics inherent in natural muscles but is three times stronger. It has a high strain, up to 900 percent, and can lift weight about 1,700 times greater than its own. The actuator is electrically activated and lightweight.

To achieve those characteristics, a quest that has eluded many researchers in the past, the team used a simple combination of inexpensive, readily available and environmentally friendly materials.

They started with nonhazardous silicone elastomer, which costs about three cents per gram and is easy to 3D print, and embedded it with tiny micro-bubbles filled with ethanol. When heated by a low-voltage current running through a thin wire, the alcohol begins to boil at 78.4 Celsius and releases gas. That causes the silicone material to expand.

Lipson cannot point to any systematic study that led the team to the result. It was a matter of trying various materials with a variety of elastic and other properties. The researchers were looking for materials that were easy to fabricate, food-safe and biocompatible.

“I have to say the end result is almost trivial. What we found is something you could do years ago. There is no high tech in it,” Lipson says. “It’s sort of lots of tiny steam engines embedded into a material. When heated up, they all produce a vapor and expand. One thing that’s important to us is that it’s 3D printable, which brings together two important trends: actuation soft robotics and printable robots.”

Most soft robots in the past have been connected to large compressors, moved only tiny amounts, and produced weak forces.

Although a field of interest for decades, Lipson says soft robotics “has been stuck in a corner of what is possible in robotics because we didn’t have the right kind of manufacturing tools, so 99.9% of all robots today are rigid machines made out of steel or metal and are very different than biology. In biology, everything is very soft and has incredible capabilities that we don’t have with real robots.”

The researchers 3D-printed the muscle in the shape they desired and activated it by passing low current through a wire coiled within it. Using computer controls, the autonomous unit can perform a variety of motion tasks.

“It can push, pull, bend, twist, and lift weight,” Miriyev says. “It’s the closest artificial material equivalent we have to a natural muscle.” The team still needs to solve two other major challenges. While the muscle is very strong, has high strain, and is lightweight, it is also slow.

“You can’t play the piano with a muscle like this,” Lipson says.  “It takes anywhere from ten seconds to a minute to expand to its whole capacity.”

The second issue is longevity. Unless enclosed in a hard shell, which is not desirable, it begins to degrade over time, a bit like natural muscle, Lipson said. “These are things we still need to solve,” Lipson noted.

The team is also working to make the material slightly conductive so that current will pass throughout the entire muscle and gently heat everything. For the study recently published, the researchers used an attached wire because that’s the simplest way to actuate it, but the team believes there are better ways to apply heat. “If the material is conductive, then you can just print the whole thing without worrying about the wire so that makes it simpler also,” Lipson said.

As for a timetable or roadmap, Lipson says, “I’m a delusional optimist. I thought when I started my career around 2001 that it would take me one or two years maximum. It has turned out to be a bit trickier. We have goals but the path is uncertain. For most projects we are sailing west. We don’t know where we end, but the direction is promising.”

For Further Discussion
Without a strong soft muscle, there is a limit to how much you can do with soft robotics.Prof. Hod Lipson, Columbia University