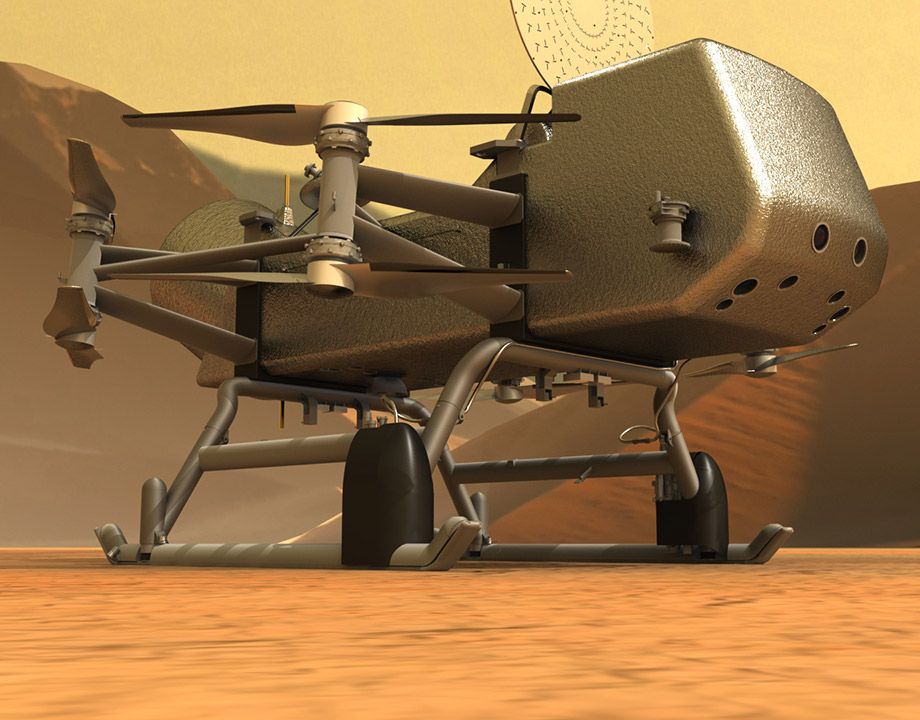 A New Drone Gets Ready to Explore an Unusual Planet

Saturn’s moon, Titan, is a world like no other, and Johns Hopkins University’s Applied Physics Laboratory is building an equally unique rover to explore it. Unlike the Mars rovers, APL’s Dragonfly will discard wheels and instead fly between locations. This will give it a range of over 175 km—double the distance of all the Mars rovers put together—over its 2.7-year lifespan.

“It is the only moon with an atmosphere, and it is an ocean world,” answered Elizibeth “Zibi” Turtle, who heads the project at APL. 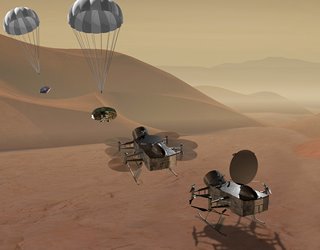 The Dragonfly drone is the size of a Volkswagen Beetle and weighs 700 kg, and has eight rotors. Image: NASA
Thanks to the satellite Cassini, which spent 13 years orbiting Saturn, we know a lot about Titan. It is a moon larger than the planet Mercury, whose temperature averages a frigid -180 C. It has a thick nitrogen atmosphere that contains liquid methane, which circulates between rainclouds and oceans, much like water cycles on Earth.

Cassini also found evidence of volcanoes, which blast ice and hydrocarbons into skies. Mixing in the atmosphere, this created a witches' brew of organic compounds that may resemble those of Earth at the dawn of its evolutionary history. Some believe these chemicals might beget primitive forms of life.


The possibility of life made Titan a natural choice for NASA’s New Frontiers program, a competition among government and academic institutions for up to $1 billion to fund a research program. Dragonfly’s mission is to investigate the organic molecules that lie like dust on the sand dunes that cover the planet’s dry surface and then fly to a meteor impact crater where heated liquid water and organic materials may have mixed together.

Titan’s atmosphere presents some unusual challenges for engineers. Unlike Mars, Titan’s air is not thin. In fact, it is four times denser than that of Earth despite having one-seventh Earth’s gravity. This makes for some very interesting aerodynamics.

“You could put wings on and fly,” Turtle said. “Dragonfly can use the same size rotors as the helicopter NASA is sending to Mars, rotate them at slower speeds, and still carry two orders of magnitude more mass.”

APL’s drone engineers plan to take full advantage of that environment. Ken Hibbard, APL’s mission systems engineer, envisions a 700 kg quadcopter about the size of Volkswagen Beetle with four sets of counter-rotating rotors. Capable of rising 4 km into the atmosphere, it will easily avoid obstructions and land on mountains.

Dragonfly’s deployment takes advantage of Titan’s soupy atmosphere. The capsule containing the lander opens its first parachute 135 km above the surface, then floats downwards for a remarkable 82 minutes. The main chute deploys 4 km above the surface, and the heat shield separates. The lander releases a few minutes later, powers up its rotors, and flies off to a landing site.

Once on the surface, Dragonfly will drill into the surface, vacuum up the debris, and analyze it. Hibbard expects the craft to make about 40 flights, moving from sand dunes to the Selk meteor crater, where the heat of the impact appears to have formed complex molecules from liquid water and organic chemicals.

Thanks to its 40 km range, Dragonfly will do some scouting every time it flies between research sites. It will bypass its designated landing area, check out some potential future sites from the air, and then double back to its previously chosen location. Once the craft is on the ground, APL researchers will assess the scouting reports and pick the next landing site.


Before any of this, however, engineers must get Dragonfly to Titan safely. The voyage will last from 2026 to 2034. No such similarly complex mechanical device has ever endured the cold of space that long. 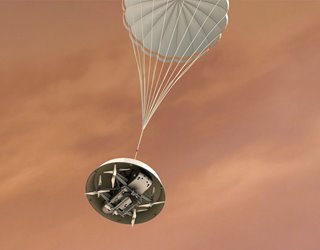 Dragonfly at the final stage of its descent. It has dropped the heat shield. Once the lander releases, it will fly down to the surface. Image: NASA
“Dragonfly will be in transit for eight years,” said Jack Langelaan, an associate professor of aerospace engineering at Pennsylvania State University, whose Vertical Lift Research Center of Excellence partners with APL on drone aerodynamics and rotorcraft design. “We don’t want to have cold-welded moving parts and seized bearings when we get there.”

The solution involves choosing materials carefully and using heat from Dragonfly’s radioisotope thermoelectric generator, similar to the one that powers Curiosity Rover on Mars, to keep the drone warm. On the planet, the generator slowly recharges Dragonfly’s batteries, which discharge at the high speeds needed for flight.

Although Titan’s dense atmosphere and low gravity make flight easy, it still took advanced engineering to build the 700 kg drone, which is about the size of an old Volkswagen Beetle.

“The rotors had to be small because we needed to confine them within the spacecraft,” Langelaan explained. “Because of the atmosphere’s density and viscosity and the low gravity, the rotors had roughly the same flow regime as wind turbines, sailplanes and ultralight aircraft. We also didn’t have to spin them so fast, which reduced the amount of vibration they generated during flight.”

The design uses eight blades to give the Dragonfly some redundancy. Like a conventional drone, it alters its heading by changing the speed and thrust of the rotors.

The team lucked out when it came to testing the drone’s rotors. They needed a facility that duplicates Titan’s high atmospheric density and frigid temperatures. The National Transonic Facility at NASA’s Langley Research Center in Virginia does exactly that.

“[Smaller scale models] of practically all commercial aircraft wings are tested in the NTF,” said Sven Schmitz, an assistant professor of aerospace engineering at Penn State. “To achieve flow similarity with greatly reduced model scale, one has to match two dimensionless groupings in fluid mechanics, the Reynolds number [a measure of turbulence flow] and the Mach number.”

To do this, NTF pressurizes its tunnel and cools it with liquid nitrogen, which drops the temperature sharply such that the fluid viscosity is greatly reduced.

“This can match the Reynolds number closely and the reduced temperature lowers the speed of sound (which is proportional to the square root of the temperature), such that the required Mach number can be achieved,” Schmitz said. “This is the science of scaled wind tunnel testing.”

This combination of high density and cold temperature is very close to the actual conditions on Titan, and perfect for testing Dragonfly rotors and vehicle aerodynamics, Schmitz added.

This type of realistic testing also gives engineers the confidence that when Dragonfly finally alights on Titan in 2036, its mission will last long enough to tell us whether life could evolve on this frigid world.