From tattoos and medical treatments to tracking animals, a miniature skin patch with microscopic needles is paving the way for less painful applications.

Advanced Manufacturing Biomedical Engineering Medical Equipment and Device Manufacturing Technology and Society
The long, painful, bloody process of getting a tattoo, at least a basic one, may become a thing of the past.

Engineers at Georgia Tech have developed a miniature skin patch with microscopic needles that can be used to easily and somewhat painlessly ink medical or cosmetic tattoos, even at home.

The patch has a variety of applications, including those for medical alerts, guiding cancer radiation treatments, tracking animal, covering cancer scars, and restoring nipples after breast surgery. It can imprint permanent, temporary, and black-light ink.

Contine the Read: 3D Printing at the Nanoscale

While the patch could change how many tattoos are given, professional tattoo artists don’t have to worry about losing their jobs.

“I don’t think that the microneedle patch is going to displace the serious, the large, the very intricate tattoo,” said Mark Prausnitz, the J. Erskine Love Jr. chair in the school of chemical and biomolecular engineering and principal investigator on the research paper, which was recently published in iScience. “But I do think it offers a lot of possibilities.”

At first glance, the tattoo patch seems relatively simple. As the research progressed, the team primarily used a 3D printer, opposed to a CO2 laser cutter used in the early stages, to create a master structure with conical cavities for the desired array of needles. A silicone mold was made from the master. 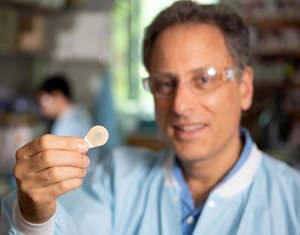 A microneedle patch tattoo is held by inventor, Mark Prausnitz. Credit: Georgia Tech
The needles are about 10 to 20 microns thick and of varying length, typically measured in micrometers. They’re made from a solution of water-soluble materials, including a polymer and sometimes sugar for faster dissolution. The researchers suspended tattoo ink particles, which are non-water-soluble, in the solution and poured it into the mold. No metal is needed to make the needles. When the solution dries, the needles are peeled from the mold. After penetration, the skin’s moisture dissolves the ink, and most of the needles, leaving behind the tattoo.

“The biomechanics of (the research) turned out to be not trivial,” said Prausnitz, whose primary research focuses on drug delivery through microneedles and other methods. “They were a lot more complicated than I anticipated.”

One problem stemmed from the human skin, which is deformable as opposed to flat and rigid. This makes it difficult for all the microneedles to penetrate the skin and deliver ink needed to complete the intended image. To overcome that, the researchers had to make the needles incredibly sharp and alter the length of some to compensate for the valleys and other deformities in the skin.

Another major challenge was finding the right ink. The tattoo industry in the United States is lightly regulated, Prausnitz said. That makes it difficult to know the exact ingredients of an ink and how it would perform during fabrication and penetration. The team had to try a variety of different inks, including liquid, powder, and paste, before finding the right formula.

Overcoming those complications, though, could lead to a much simpler and accessible tattooing processing.

Prausnitz, who doesn’t have a tattoo, envisions a future where a clinic or consumer can order a customized microneedle tattoo online and have it quickly delivered to a clinic or home. He’s especially excited about developing microneedle patches using temporary ink that will disappear after a certain period.

“That’s something people could do themselves with confidence because the stakes are so much lower when it's a temporary tattoo,” he said. “It could be a lot of fun for people.”

Prausnitz believes the microneedle tattoo could hit the market in some form, depending on FDA approval for certain applications, in the next two years. Meanwhile, his team will be working on adding more, sharper needles to the patch to improve resolution.