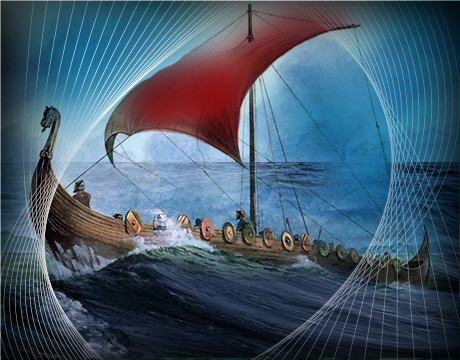 The Vikings are coming. Again.

After a 900-year hiatus, Viking culture and all things Nordic are suddenly landing on shorelines around the world. From the History Channel's ratings juggernaut Vikings, to 2011's blockbuster Thor, to the upcoming summer epics Hammer of the Gods and Thor 2, it is suddenly very cool to be a Northman. Even HBO's fictional Game of Thrones is set in the distinctly Viking-esque kingdom of Westeros.

And yet, surprisingly little is known about this ancient culture that so thoroughly changed the world, and that has so thoroughly captured the imagination of scriptwriters, viewers…and engineers alike. "There's much more that's unknown [of the Viking Age], or even unknowable, than there is that is known," says Dr. William Short, who holds a Ph.D. in electrical engineering from the Massachusetts Institute of Technology, but who is now an author and independent scholar specializing in Viking-age topics, as well as being a research Fellow of the Higgins Armory Museum in Worcester, MA. He teaches Viking martial arts on his site, Hurstwic.org.

One thing we do know for certain, however, is that they could sail. And how.

The Viking longboat, along with a related design called the "knarr" for shipping cargo, is a true engineering marvel of the ancient world, and in light of the fact that modern replicas have been apocryphally clocked at 25 knots, these boats are a marvel to this very day, over a millennium later.

"First of all, they [longboats] had very shallow drafts, so they could sail in very shallow water, which meant they could go anywhere," says Short. "They were strong enough to cross the open ocean, but they were shallow enough that they could go way up river and truly surprise people in places where no one expected an ocean-going ship to appear."

And surprise people they did, with Viking culture fundamentally reshaping the people and culture of the British Isles, while simultaneously spreading as far east as modern Russia and as far southeast as modern-day Turkey, where the "Varangian Guard" served Byzantine emperors for centuries. At the heart of it all, of course, was the longboat, their unparalleled means of transportation.

"Another thing they [longboats] could do was sail very close to the wind – atypical for European ships of that time," Short continues. "So they could sail in many directions, and unexpected directions given the wind." One of the advances that enabled this virtually unique ability, related to "tacking" in today's terminology, was the "beitass," which was a spar that helped brace the sail against strong winds.

However, one curiously modern advance in the engineering of the longboat seems to be the flexibility of the vessel. Anyone who has seen an airplane wing bounce up and down in a high wind knows how critical flexibility can be to the structural integrity of any vessel, particularly one trying to navigate huge ocean swells far out to sea. The Vikings seem to have grasped this concept much earlier than many other cultures.

Combine all of these engineering elements – shallow draft, the ability to sail in any direction, and an incredibly durable, flexible design – and you had a boat that could create a distinct advantage for an early middle ages people, whether in warfare, trade, or exploration. But this particular people had one additional advantage, at least as far as discovery and exploration went. This advantage had nothing to with engineering and everything to do with psychology and the type of thinking that would enable a group of sailors to head for the horizon on the open ocean, not having any idea what would greet them when they got there. In effect, to go on what many would have considered an early middle ages suicide mission.

Why not, indeed. With a mentality that truly lent itself to bold exploration and discovery, it is little wonder the Vikings accomplished all that they did. However, the next time an episode of Vikings comes on television, or you're in the middle of a crowded theater at one of this summer's blockbusters, keep in mind that things like draft, tacking, and stress analysis were just as responsible for the adventures we still enjoy watching today.

They were strong enough to cross the open ocean, but they were shallow enough that they could go way up river and truly surprise people in places where no one expected an ocean-going ship to appear.William Short, author and Viking scholar