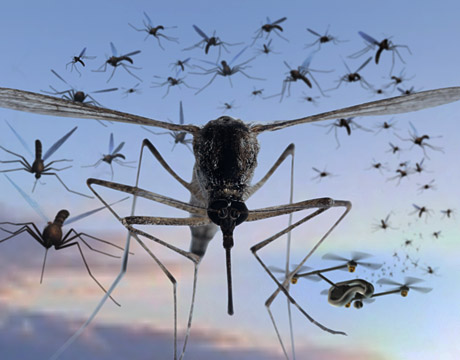 Drones Join the Fight Against Zika

Robots are usually thought of as a high-tech solution to first-world problems, like building cars, vacuuming floors, or delivering pizzas. But developing countries have, arguably, bigger problems, and it turns out that robots have a place in solving some of them. Take the fight against the Zika virus.

WeRobotics, a company based in Switzerland and Delaware, aims to democratize technology and get robots working for those in greatest need. “Our goal is to make robotic technologies available to solve social issues in developing countries,” says Adam Klaptocz, co-founder of the company.

One way they do that is by bringing established technology to where it’s most needed, and teaching the locals how to use it and maintain it. “It’s not about dropping a Lamborghini in the middle of the jungle,” says Klaptocz. WeRobotics has, for example, started drone hubs in under-mapped African cites. There, they teach residents of new and sprawling shanty towns to capture images from above so water and electricity can be brought to each home.

At the same time, the company is working to create new technologies to meet specific challenges. The Zika virus is a big one.

How do you use a robot to stop a viral epidemic? One way is to go after the insect responsible for spreading it, in this case the mosquito. Rather than use dangerous pesticides, Kaptocz is hoping to decimate the blood-sucking population by introducing hundreds of thousands of sterile individuals. “You have to bring in a lot of mosquitoes,” he says. “You start off with 10 times as many sterile mosquitos as the population.”

The sterile insect technique, as it’s called, has been used since the 1950s. It hassuccessfully eliminated the screw-worm fly as a problem in the US and helped control tsetse populations in Africa.

But where 60 kilograms of flies can be packed into a Cessna and spread over an area like so much pesticide, mosquitos are a far more difficult animal to deal with. As anyone who’s smacked one in action knows, they’re easily dispatched. A plane, no matter how small, is too fast for mosquitoes to survive an airdrop. Hence the drones.

But slower speeds won’t end the difficulties. “There are many different challenges with mosquitos,” says Klaptocz. “They are sensitive and clump into little bunches. They’re supper skinny things, with long legs and skinny long wings. They latch onto each other and are very difficult to separate.” So Klaptocz and his colleagues are looking to create a mechanism for separating mosquitoes, or keeping them separate, and spitting them out one by one. They’ve turned to separating mechanisms found in the food industry.

They also use food. Cumin, when damp, resembles a mosquito, according to Klaptocz, and using it solves one problem of experimentation. “We can’t spread millions of non-native mosquitoes all over Europe,” he says. “If we introduce such a mosquito here, we are in trouble.” For now, Cumin works as a stunt double.

At the end of November, Klaptocz and his crew will head to Peru for a field test. How best to disseminate the fragile insects is only one of the problems that they’ll have to solve. “For example, we need to make sure they stay cold from the time they are sterilized till the time they are released. That might be easy in Europe, but we’re not sure what the situation might be in the Peruvian Amazon. Do they have refrigeration? Do they have power? What are the logistics? All this stuff you only find out when you go to the field,” says Klaptocz.

With the right mosquito-releasing mechanismandlogisitics, WeRobotics’ drone could have a massive impact on world health. “For now, the economic space doesn't exist for someone else to work on this problem,” says Klaptocz. “It’s our hope to push it forward and prove you can have a huge impact. Then if the market starts spinning, and it becomes a product you can buy, then maybe we’ve done our job.”

Nomination Deadlines for ASME Honors and Awards are Approaching