5 Reasons to Be Jazzed About Fusion

5 Reasons to Be Jazzed About Fusion 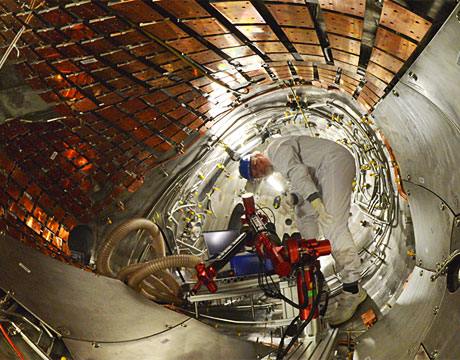 The interior of the W7-X stellarator. Image: Wikimedia Commons

The W7-X is the world’s largest optimized stellarator. Housed at a Max Planck Institute for Particle Physics (IPP) facility in Greifswald, the W7-X has the rapt attention of the global energy community. Once approved by German nuclear regulators and online, it will soon be evident whether or not its nontraditional design and construction can deliver on its promise to generate more energy than it consumes on a sustained basis. If it matches or outperforms today’s dominant reactor design, the Tokamak, it could upset the paradigm of a Tokamak-based future for commercial fusion power.

The ITER reactor under construction in France will be the largest Tokamak in the world, the product of a 35-nation, $15 billion alliance to emulate the power of the sun here on Earth. But for all its sophistication, its design gives rise to the same performance challenges that have motivated many fusion die-hards to pursue tokamak alternatives. Enter the Stellarator.

Stellarators were invented at Princeton University in the early 1950s. They were eventually outshone by the Soviet Union’s Tokamak, which offered a simpler design and superior plasma-containment times.

The two technologies follow the same basic principles to create fusion reactions. They generate a powerful superconducting magnetic field that acts as a cage to contain plasma gases at temperatures exceeding 100 million degrees Celsius, the intense level of heat required to sustain the reaction. They differ in the technologies used to stabilize the magnetic field strength throughout a ring-shaped reaction chamber. Tokamaks achieve this with an internal system that delivers pulses of current into the plasma stabilize the field. Stellarators feature externally placed magnets around a torus-shaped plasma containment ring, something akin to an inner tube wrapped in ribbon. Stellarators maintain steady state operation without pulsation. In principle optimized stellarators like the W7-X could contain plasma for longer periods without the tokamak’s dangerous tendency to disrupt the magnetic field and damage the reactor.

Science magazine called the engineering model behind W7-X’s design one of the most complex ever devised. The device’s promise in its optimized design, in which the magnets encircling the containment ring are irregularly shaped to precise specifications to ensure a steady-state field within the tube. It’s a significant improvement on the Stellarator’s classical design that was only possible with today’s supercomputers and sophisticated 3-D design software. By defining the ideal shape of a plasma-containment field on the computer, researchers modeled a series of unusual magnet shapes contoured precisely to form an optimal reaction environment.

The W7-X incorporates 50 twisted superconducting magnets that weigh 6 tons each and measure 3.5 meters tall. They each contain about 1 km of superconducting cable. The magnets and a series of 20 planar magnets encircle a torus shaped vacuum chamber matched precisely to the optimized twists and turns of the magnetic field. The liquid helium-cooled assembly, which resembles a giant, semi-squashed Slinky, is housed in a 16-meter-wide cryostat with 250 entry portals.

The W7-X took 19 years (some 1.1 million construction hours) to build, at a cost of 1 billion euros (approximately $1.1 billion). The project had been close to cancellation due to cost over-runs, technical problems, and the bankruptcy of a primary magnet supplier. Teams of engineers and scientists have been testing the system for more than a year since construction wrapped up in May 2014. “Following the lengthy assembly time, we are now very pleased with the excellent measurement results,” says IPP’s Sunn Pedersen. “The flux surfaces look just how we wanted them to appear.”

The Large Helical Device (LHD) in Toki, Japan, has been the world’s largest Stellarator. It opened in 1998 and currently reflects the state of the art of stellarator technology by achieving performance rivaling Tokamaks of its size. A decade earlier in Germany, Max Planck teams launched the first partially optimized Stellarator dubbed the Wendelstein-7AS. Seeking to build on these promising advances in stellarator optimization, the U.S. Department of Energy commissioned the Princeton Particle Physics Laboratory to launch the National Compact Stellarator Experiment (NCSX) in 2004. Faced with unanticipated costs and technical issues, the project was cancelled four years later.

At this writing, the W7-X had yet to go live. But as the ITER project faces yet another lengthy delay in completion, all eyes are on Griefswald to see if this complex device will show the way forward toward infinite, safe, clean energy.