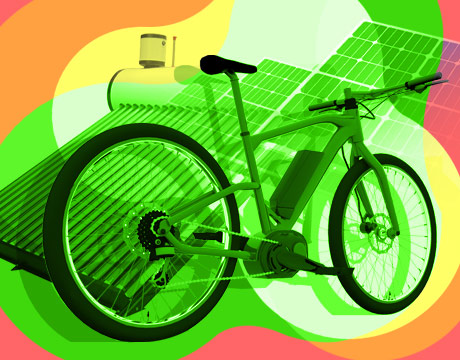 5 Green Technologies the U.S. Has Not Adopted

There are more roofs lined with solar panels than ever before, more electric cars driving our roads than ever before, and more wind turbines powering our grid than ever before. At the large scale, American technology gets greener every year and holds its own when compared to other countries. But when it comes to smaller advancements, at the individual, household, and municipal level, many eco-friendly technologies that have blossomed overseas have yet to take hold in the U.S. Here we examine five that could thrive in the U.S. with the support of the people and the powers that be.

Travel China by rail or road and you’ll see, on roofs in every city and village, a series of parallel pipes angled toward the sky with a cylindrical water tank sitting on top. These ubiquitous thermosiphons provide hot water to the residents below, at virtually no cost beyond the initial outlay; and the initial outlay isn’t much. They weren’t uncommon here, once upon a time. “Around 1900, the U.S. actually had a huge industry of thermosiphon hot water systems in houses,” says Dan Fink, a renewable energy instructor at the Ecotech Institute. “But that was before electrification and before gas was discovered in California.” Now, with interest in sustainable power on the rise, people are turning to photovoltaics before thermal heating, partly because Thermosiphons are less efficient in cold climates (though with glycol they can still work), and partly because not all roofs can support a water tank. But thermosiphons have many advantages: they don’t need batteries, they keep working when the power goes down, and they start paying you back a lot sooner.

The modern human depends on electricity to be sure, but heat continues to be a basic necessity as well. So it seems a bit odd that our power stations send the heat they produce up the smokestack. Now, thanks to the low price of natural gas, you can make your own electricity and keep the heat too, with a micro-cogeneration unit. More than a hundred thousand homes are using them in Japan. “Instead of wasting heat, you use it as preheating for your house,” says Joshua Pearce, a professor at Michigan Tech’s Open Sustainability Technology Lab. “Efficiencies can get really high, over 85 percent. It’s a very nice, elegant technology.” The U.S. has yet to adopt them on the household scale largely because no one has heard of them, but also because of the low cost of fossil fuels. For those pioneers wanting to reduce their footprint, or go off the grid, ponying up for a system is a no-brainer.

It wasn’t so long ago that in any Asian city, great or small, dawn brought the buzzing. The noise of gas-powered scooters filled all waking hours with their unique form of noise pollution. Now things have changed. The scooters are silent—and electric. In China alone there are more than 200 million electric bikes, while in North American there’s a mere 125,000. Their popularity in the East has less to do with the relative quiet they offer and more to do with cost. For a bike, electricity is cheaper than gas. The fact that there are no emissions is a side benefit. So why is the U.S. lagging? “In China the priority is efficiency,” says Josh Sultan, CEO of Jetson Electric Bikes. “They don’t mind how it looks. It’s more about how it functions.” Sultan founded his company to try to bring western aesthetics to the electric bike. By appealing to the American sense of cool, Jetson, and companies like it, may quietly save the planet, one bike at a time.

As renewable energy sources proliferate, so do questions about how to handle them. What do you do when the wind doesn’t blow and the sun doesn’t shine? What do you do when they provide an excess of energy? The answer is the virtual power plant. “If you have 100 one megawatt plants out there—wind turbines, or biomass plants—when you add them up it looks like one 100-megawatt plant to the grid,” says Doug Taylor, vice president of industry solutions for Europe for AutoGrid. “It allows them to be operated in concert, to act like one large plant.” Taking advantage of today’s interconnectivity, Autogrid can track and control both the sources of electricity and where it goes, in real time. If there’s a large industrial water pump that needs to fill a tank over an extended period, or an electric car that can be charged in three hours anytime during the night, a virtual plant can modulate them so they get their electricity when it’s most healthy for the grid. Why haven’t virtual power plants taken off in the U.S.? Regulations take part of the blame. But the biggest reason is that we simply don’t have enough renewables on line.

Water-challenged areas of the U.S. go through considerable expense to offer residents clean drinking water. Then that same drinking water is used to flush away bodily waste. “Few things upset me more than the use of quality drinking water to flush toilets,” says artist, designer, and futurist Pablo Solomon. Other parts of the world with scarce fresh water do things differently. Eighty percent of the population in Hong Kong flushes its toilets with salt water. Doing so not only saves water, it’s better for marine life at the disposal end of the stream. Of course, it also requires an entirely separate plumbing system. “The big problem here is that retrofitting and setting up the seawater-specific waste-processing plants is both expensive and can be a nightmare in terms of getting permits, studies, meeting regulations, dealing with the establishment politics, et cetera,” says Solomon. But new developments on either coast could easily take advantage of the plentiful salty stuff.

For Further Discussion
If you have 100 one-megawatt plants out there—wind turbines, or biomass plants—when you add them up it looks like one 100 megawatt plant to the grid. Doug Taylor, AutoGrid