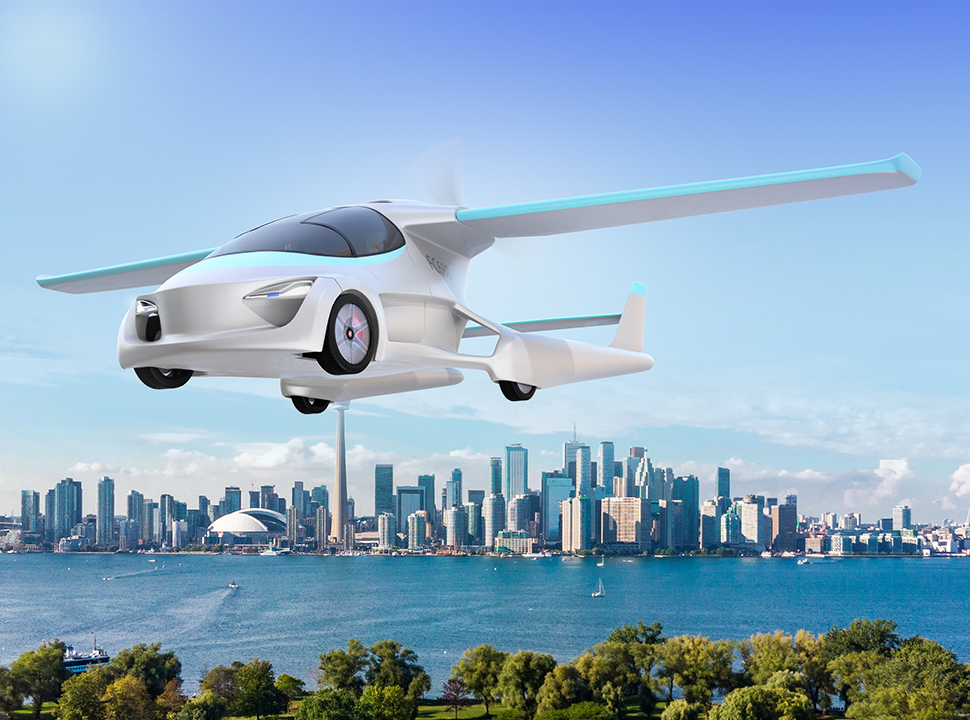 The roads and the skies are filled with the promise of flying vehicles. Explore the latest urban mobility concepts.

Air Transportation Road Transportation Robotics Technology and Society
While the future of mobility on the road shapes up to be electric vehicles, flying cars look to dominate in the sky. Vertical take-off and landing aircrafts (VTOLs) and road vehicles that can transform into winged air- craft are growing in popularity and becoming mainstream.

VTOLs are small in design when compared to commercial aircraft. Instead of fixed wings, many are designed with rotors and wings that fold. This allows them to be more efficient in forward flight and useful in urban areas with their ability to hover off the ground. According to the study, Role of Flying Cars in Sustainable Mobility, conducted by the University of Michigan’s Center for Sustainable Systems, there are several advantages to VTOLs that, alongside electric vehicles, could help society reach a sustainable mobility system.

VTOLs fast cruise speeds and direct point-to-point travel would reduce travel time and vehicle congestion, especially in high traffic cities. This would reduce carbon emissions from idle vehicles stuck in traffic. When comparing emissions, flying cars produce fewer carbon emissions than cars traveling the same route on the ground. Rideshare services looking to integrate VTOLs into their fleet would also want to maximize passenger capacity in VTOLs. This reduces the number of vehicles on the road, leading to less car pollution and a cleaner environment.

There are still several logistical hurdles that need to be overcome before flying cars can be fully implemented—regulatory and safety challenges are at the top of the list. However, that has not stopped several companies from throwing their hat into the ring and designing futuristic concepts. Here are five flying car concepts ready to take aim at the skies. 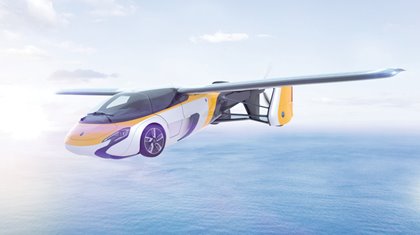 Photo: AeroMobil
The AeroMobil is a flying-car concept inspired by the mythical horse Pegasus. Over the last 10 years, a team of automotive and aerospace engineers from companies such as BMW, Aston Martin, Lockheed Martin, and Airbus has worked to deliver the concept vehicle. The AeroMobil can seamlessly transform from car to aircraft in under three minutes. Powered by a turbocharged engine, the AeroMobil offers adaptive transmission for both road functionality and direct drive during flight. The vehicle can reach speeds of up to 99.4 mph and 0-62 mph within 10 seconds on the ground, and in the air, it can reach a max cruise speed of 161 mph, powered by a 2,800-rpm prop fan at the rear. The AeroMobil has undergone 10,000 hours of simulated and live flight tests. The first orders of the vehicle are set to deliver in 2023.

Recommended for You: Driverless Cars Will Race at Indy 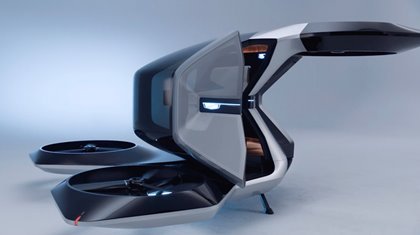 Photo: GM
The latest concept to hit the scene is General Motors’ Cadillac Vertile. Debuted at CES 2021, the single passenger aircraft can reach speeds of up to 56 mph and is more geared towards urban commuter transportation. The concept is entirely autonomous and is designed to transport commuters between building rooftops in major cities. The aircraft is also completely electric with a 90-kWh battery that powers the EV motor to propel the four rotors. According to GM VP of Global Design Michael Simcoe, the concept vehicle is “a glimpse of what autonomy and Cadillac luxury might look like in the not-to-distant future.” 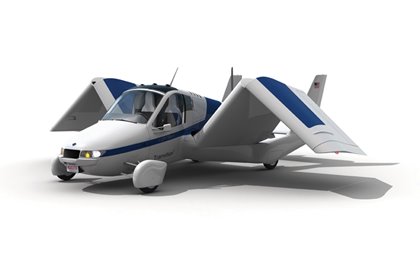 Photo: Terrafugia
The Terrafugia’s Transition “roadable aircraft” recently received FAA’s special light-sport aircraft airworthiness certification. The concept is a two-seat flying car that will meet the National Highway and Traffic Safety Administration safety standards by 2022. The Terrafugia is powered by a 100 hp Rotax 912iS Sport fuel-injected engine and will reach a max cruise speed of 100 mph. Some of the standard features include a Dynon Skyview avionics package, a BRS airframe parachute, four-wheel hydraulic disc brakes, a rigid carbon- fiber safety cage that meets automotive standards, and folding wings so the Transition can be parked in a single-car garage. 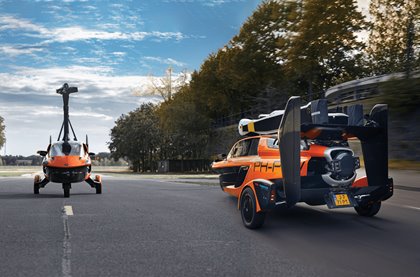 Photo: PAL-V
Coming soon to the roads in Europe is the PAL-V Liberty. The flying car concept was approved for road usage after completing a rigorous and extensive drive-test program. The vehicle had to pass brake and emission tests as well as be noise pollution compliant before being able to hit the road. To be considered air-worthy, the PAL-V Liberty has also been testing for the past 10 years under the guidance of the European Union Aviation Safety Agency (EASA). As 80 percent of the future PAL-V customers have no experience flying, some have started the training for a gyroplane flying license at the PAL-V FlyDrive Academy.

You May Also Like: Air Taxi Aces Test Flight 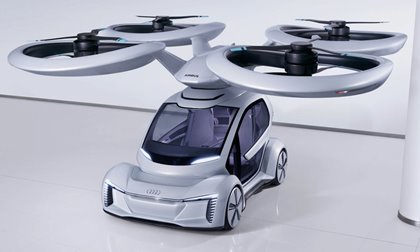 Photo: Audi/Airbus
The Pop.Up Next Concept provides commuters a self- driving, self-flying, and fully autonomously electric- powered taxi. The design operates on a multi-mode principle. The capsule sits on a four-wheel ground module for driving through the streets. When it transforms into flight mode, the capsule detaches from the wheel-bed and attaches to an eight-rotor air module capable of vertical take-off. The vehicle will have an advanced AI navigation system that can optimize a rider’s trip via road and air travel. The concept is a partnership between Audi and Airbus and debuted at the Geneva Motor Show in 2017. The vehicle is expected to hit the market by 2030.