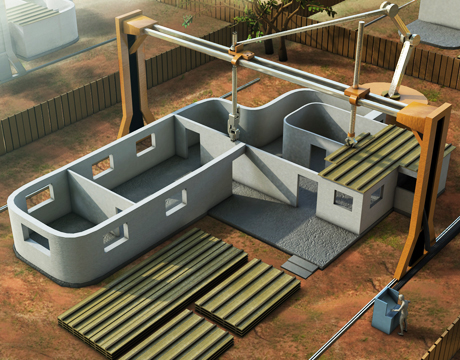 Polygonal doodads in plastic, obscure medical devices, one-off parts, jokey chess pieces, and unregulated handguns: these are the things that pop into the mind at the mention of 3D printing.

But long before any MakerBot had come into existence, Dr. Berok Khoshnevis, a professor of multiple engineering disciplines at the University of Southern California and director of theCenter for Rapid Automated Fabrication Technologies, dreamt up a way to print things of larger size and, arguably, importance. His company, Contour Crafting has, or will have soon enough, the capability to quickly print out walls, houses, buildings, and, conceivably, entire neighborhoods.

The technology is not unlike the additive machines on the job today for smaller tasks. But instead of plastic, it uses “a special cement we formulate,” says Khoshnevis. A trowel shapes that special cement as it emerges from the printer’s nozzle. That and a hardener added to the cement allow each layer of a wall to be applied without the usual drying delays.

Khoshnevis says that with his process, a 2,500-square-foot custom-designed home could be printed in a matter of 20 hours. That includes the walls, floors, and roof as well as conduits for electricity and plumbing. The speed and simplicity of production make the technology ideal for the erection of houses for the needy at disaster sites, and slums around the world.

The machine also means that those houses could be produced at an extremely low cost. Quick production lowers the need for financing; labor costs are next to nothing; and few materials will be wasted. And the emissions and energy usage of printing a house would be a tiny fraction of that used to build houses today.

But the advantages of a 3D printed home extend far beyond the humanitarian and the sustainable. The brick, the cinderblock, the glass pane, the two-by-four and even the log, lend themselves to the right angle. The architect on a budget tends to design in terms of boxes. Deviations from 90 degrees tend toward angles more oblique or acute, but rarely curved. But with Khoshnevis’s system, the curved wall is as simple and inexpensive to produce as any other.

“Architects are crazy about those exotic designs, but they are expensive to do,” says Khoshnevis. “To the printer, the task is not harder or easier.” Using CAD/CAM, the architect can make structures that are as swervy, complicated, and structurally sound as any structure in history.

In fact, curved walls are much stronger than straight—a major benefit for earthquake-prone locales. But even without a curve the printed walls are a good three times as strong as the walls of houses today.

Locales far from local will benefit as well. Khoshnevis has been working NASA to come up with a printer for building structures on the moon or Mars. “Instead of taking material from here to there, take our machines and use in situ material,” he says. In the water-free environments found on the moon and Mars that means melting extraterrestrial soils to make a kind of lava that would be extruded through the machine’s nozzles.

Khoshnevis has made a machine that can print a wall layer by layer. With a minimal amount of research and development, the process can include the addition of rebar and the automatic installation of plumbing and electrical and communications wiring. Long before it’s used to build structures on orbs other than Earth, it’s likely to be put use not only with terrestrial buildings, but also with bridges, towers, and other civil engineering needs.

For Further Discussion
Architects are crazy about those exotic designs, but they are expensive to do. To the printer, the task is not harder or easier.Dr. Berok Khoshnevis, director, Contour Crafting