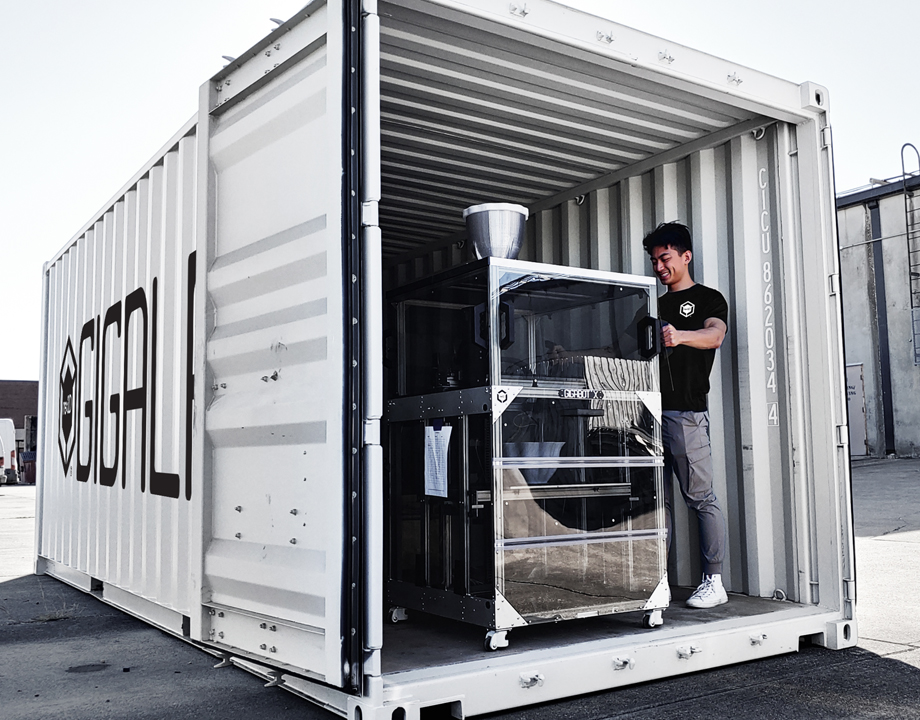 A company has fit a plastics recycling and additive manufacturing set up in a shipping container.

3D printing keeps getting more refined, as manufacturers develop printers that can produce everything from finely detailed objects to houses. But to make those products, 3D printers are generally confined to a production center. Mobility has been slow in developing, but that is changing as one company has fit an entire 3D-printing line into shipping containers, designed for use in remote or off-the-grid locations. Instead of relying on standard plastic pellets, the system can tap into recyclable plastics for feedstock.

Gigalab is the concept developed by Re:3D, a Texas-based 3D-printing company, in response to the COVID-19 pandemic. Broken supply chains and the shortages of personal protective equipment (PPE) kickstarted the firm’s plans to build a system that could go directly to where it was needed. 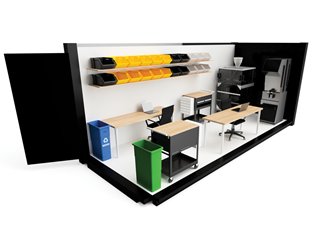 A granulator, a dryer, and 3D printers fit into a shipping container for a two-person workspace.
“We initially conceptualized Gigalab as a PPE lab that would be stocked with all the supplies you might need to 3D print PPE,” said Re:3D ambassador Charlotte Craff. “It could be installed in a location and then moved around as needs change. Another option was this recycling lab concept. We make a printer called Gigabot X, a pellet and granular extrusion 3D printer that can print with shredded plastic waste so you don’t have to have the material in a pellet or filament form, you can use shredded pieces of plastic.”

The concept provides all the equipment needed to turn recyclable plastics into useful products. The plastic waste must first be processed to remove impurities such as adhesives. The system includes a granulator to shred the plastic into pieces as small as 1 mm, a dryer, and the printer itself, fitted with an extruder to handle the recycled nonuniform-shaped material. Unlike most printers, the Gigabot X printer handles nonuniform shaped plastic particles without jamming. Depending on the configuration, a Gigalab includes either one or two workstations.

The U.S. Air Force Academy is one of the first customers to purchase Gigalab. It will use two units to process plastic waste from academy’s dining hall to produce models used by cadets to study airflow and aeronautics. Craff said they will be located remotely to test the concept of using them in the field.

More on Additive Manufacturing: Printing Across Barriers with Sound

Craff said Gigalab’s energy needs are 13 kW if all the equipment is operating at the same time. The printers draw 1,300 W themselves. “We don’t estimate that we’d be doing that all the time,” she said. “We can granulate separately and then use the printer.”

Another Gigalab is being installed in Puerto Rico at the 24,000-square-foot Engine 4 coworking space in Bayamon. One group already uses Re:3D’s Gigabot 3+ printers that use standard plastic pellets to print replicas of coral intended to promote the growth of marine life.

The Gigalab brings the Gigabot X printer with the flake extruder, allowing the use of recycled plastics. Craff said Engine 4 tenants are artists, designers, and engineers who can prototype at scale with the system.

Craff noted that the first Gigalabs, which cost $150,000 per unit, are still considered prototypes. Customers will be able to customize the setup based on their needs, so costs could change.

Printing Across Barriers with Sound