EL560 - Drawing Interpretation has been added to your cart.
View Cart
Courses 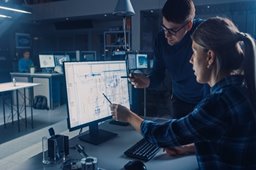 This Self Study course is available on ASME’s Learning Hub, our online learning platform, and is designed to be taken at your convenience, and on your own schedule. You have 90 days to complete the course from the date of purchase.

The course consists of nine modules, each with a quiz; most also include drawing assignments and supplementary information.  As reference material, a drawing packet is included that shows five detail drawings and an assembly drawing for the parts of a Trolley Wheel. The package includes flat and round parts and a casting.  Possession of the ASME Y14.5 Dimensioning and Tolerancing Standard is recommended.

This is an online, self study course, allowing you to work at your own pace and convenience.

You Will Learn To

To take this course you should have a personal computer, Web browser, Internet connection, and software to display PDF files (such as Adobe Reader).

Patrick J. McCuistion, Ph.D., GDTPS, created all the figures for the Y14.43 standard. He was an Associate Professor in the Engineering Technology and Management Department at Ohio University for 25 years. He taught Geometric Dimensioning and Tolerancing, Dimensional Analysis, Quality Management Systems, Microsoft Office Suite, and Technical Writing. Prior to that, he taught three years at Texas A&M University and one year at Pittsburg State University.