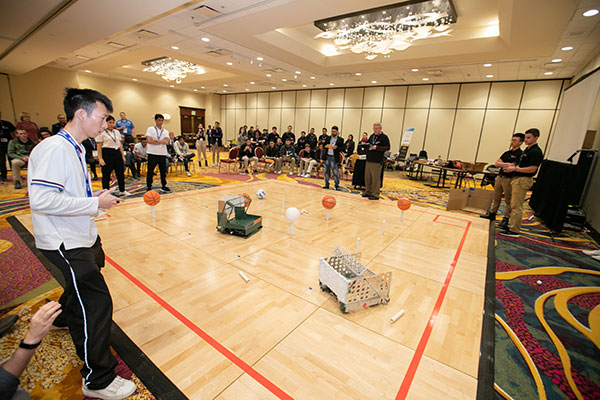 ASME student members from universities in the United States, Mexico, Ecuador, Peru and China faced off during the final round of the ASME Student Design Competition (SDC) earlier this month at the ASME 2019 International Mechanical Engineering Congress and Exposition (IMECE 2019) in Salt Lake City, Utah. The event was one of two ASME student competitions, along with the Old Guard 63rd Annual Oral Competition Finals, that took place at the conference. 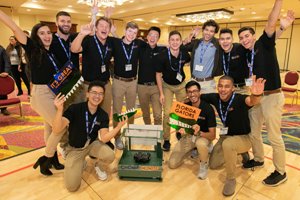 The Student Design Competition (SDC) team from the University of Florida were once again named the champions of the SDC finals at IMECE 2019, following a first place showing at IMECE last year.
Fourteen student teams, each a competitor at the regional SDC events held at the ASME Engineering Festivals® during the spring and summer, took part in the SDC championships on Saturday, Nov. 9, at the Salt Lake City Marriott Downtown.

This year’s Student Design Competition, “The Pick-and-Place Race,” challenged students to design and construct remote-controlled robots that could quickly collect a variety of balls — ranging in size from ping pong balls to basketballs — from their stands and place them in a collection area without the balls hitting the ground. Speed was name of the game at this fast-paced event; the winners of most of the elimination rounds were decided within the first 15 seconds of each match.

At the end of the exciting daylong tournament, the team from the University of Florida emerged as the big winner at the SDC finals for the second year in a row. The team, which had also placed first in the regional SDC at E-Fest North in April, guided their robot to victory against competitor North Carolina State University during the event’s final match, collecting the $3,000 top prize as well an additional $1,000 for the University of Florida ASME student section. 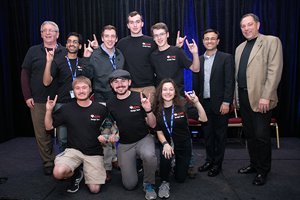 Kevin Schmaltz (far left), chair of the SDC Committee, E-Fest Steering Committee Chair Twish Mehta (second from right) and ASME Executive Director/CEO Tom Costabile (far right) join the team from North Carolina State University, which finished second at the SDC finals.
“I think we had the right mindset when we designed it, prioritizing speed versus being able to collect [the balls] as accurately as possible,” said the team’s driver, ASME student member Andres Taquechel. “And I think it showed, which was very rewarding.”

In addition, Taquechel credited adequate preparation and the adept leadership of the team’s captain, Duc Nguyen, as key contributors to the team’s success at the SDC finals. “In previous competitions, we had to tweak things throughout the entire day,” said the junior at the University of Florida, who has been the team’s driver for the last two years. “But we prepared a lot beforehand, so we were ready. Duc did a great job and just really spread the workload so that we were able to get things done on a very good timescale.” In addition, “[Duc] basically made spare parts for every single thing in the robot, so if anything went wrong, we didn’t have to try to fix it. We’d just attach a new one. The design was very modular so you could replace something within a couple minutes very fast.”

The team from North Carolina State University, which had been the top seed throughout the day, placed second to Florida in the competition and secured the $1,000 second prize as well as $500 for the university’s student section. The third-place trophy — and the $500 prize that accompanied it — went to the team from Hong Kong Polytechnic University. The team, which had placed third in the regional competition at E-Fest Asia Pacific in India last February, also received $250 for its student section. 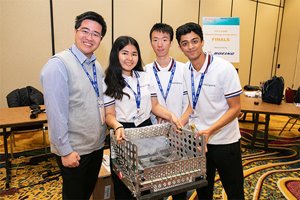 The SDC team from Hong Kong Polytechnic University: (From left) Chun Ng, the team’s advisor, with team members Maral Shagatay, Kai Lok Kwan and Parth Maheshwari.
Parth Maheshwari, a senior from Hong Kong Polytechnic University, was pleased with his team’s performance at the finals. “We’re the only Asian team,” he said. “All the rest of the teams are from either North or South America. We’ve flown so far [to be here]. So it was really important we do our best so that we go back with no regrets. But we did our best. We got second runner-up, so we’re happy with that.”

The experience was inspiring for teams that didn’t make the top three as well. Aaron McCullough, the driver for the team from Eastern Washington University, said, “It’s been really fun to come out here and represent Eastern.” Even though his team didn’t make it to the last round of the finals — it came in second to NC State during the elimination round before the quarter-finals — McCullough enjoyed the competition and said he considered events such as the SDC as essential to an engineering student’s education. “I think projects for [engineering students] are the most important part of your class experience,” he said. “If you do the classes, you learn the information. When you do the projects, you learn to be an engineer.”

Five ASME student members received prizes at another major student competition held at this year’s IMECE: The Old Guard Annual Oral Competition Finals. The competition, also held Nov. 9, emphasizes the value of the ability to deliver clear, concise and effective verbal presentations, particularly pertaining to some sphere in which an engineer is or should be involved. Ten students, who either placed first or second at one of the regional Old Guard Competitions at the E-Fests, competed during the finals.

Shmuel (Sam) Shollar of the University at Buffalo, who took first place at E-Fest North at Michigan State University last April, was named winner of the $2,000 first prize at the finals for his presentation, “ShapeShifter: A Multi-Agent System for Planetary Exploration.” 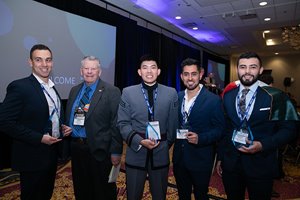 The $1,000 third prize at the competition went to Sebastian Pinto, a student member from Universidad San Francisco de Quito in Ecuador for his presentation, “Ergonomic Design of a Human-Powered Competition Vehicle.” Pinto had received first prize for the presentation at E-Fest South America in Lima, Peru, in August.

Daniel Chung, a student at the United States Military Academy, took fourth place at the Old Guard finals in Salt Lake City with his presentation, “3D Velocity Field Measurements In Rugged Terrain — Ancho Canyon.” Chung received the $500 fourth prize for his presentation, which had won second place at E-Fest North in Michigan.

Daniel Mori of Pontificia Universidad Catolica del Peru was recognized with a special Innovation Recognition award for his presentation, titled “Spider Robot for Anti-Personnel Landmine Detection.” Mori, who received $250 with the award, had been a first prize winner at E-Fest South America in August.