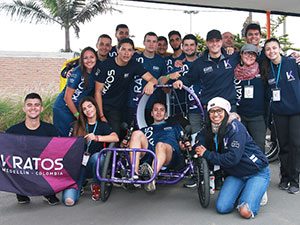 The members of the Human Powered Vehicle Challenge (HPVC) team from Universidad EAFIT, the overall champions of the HPVC at E-Fest South America in Peru, with their winning vehicle, Kratos VTH Poder.
The 2019 E-Fest season drew to a close earlier this month with the presentation of E-Fest South America. The event, the second festival to be hosted in South America, took place from Aug. 8-10 at Pontificia Universidad Católica del Perú in Lima, Peru.

Approximately 500 students, educators, ASME members and other attendees participated in the three-day event, which highlighted the fun and excitement that the engineering profession has to offer. This was the fourth E-Fest ASME held this year, following E-Fest Asia Pacific, which was held in Vellore, India, and two events in the United States: E-Fest West in Pomona, Calif., and E-Fest North in East Lansing, Mich. 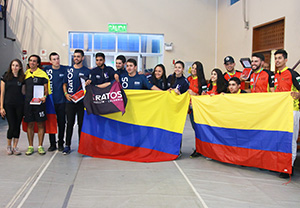 The top three overall teams at HPVC South America: (Left to right) Universidad de los Andes, which placed second; Universidad EAFIT, which placed first overall; and Universidad Pontificia Bolivariana, which finished third.
A team of students from Universidad EAFIT in Medellin, Colombia, proved a force to be reckoned with during one of the competitions, the Human Powered Vehicle Challenge (HPVC). Thirteen student teams competed in the three-day event, which encompassed a design evaluation, men’s and women’s speed races, and a two-and-a-half hour endurance competition.

In addition to taking home the $1,000 prize for placing first overall, Universidad EAFIT won an additional $750 for finishing first in the men’s speed race, the endurance event and the design category. The team, whose vehicle was named Kratos VTH Poder, also placed second in the women’ speed event and received a special “Team Spirit” award in recognition of their motivation and enthusiasm.

A team of students from Universidad de los Andes in Bogotá, Colombia, took second place overall — and won the $750 second prize — with their vehicle, Carbon One. The students, who also received $250 for placing first in the women’s speed race, placed second in the endurance event and the design category. 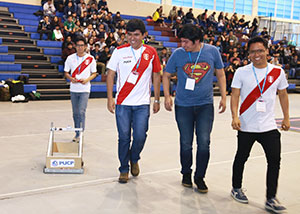 Members of the Student Design Competition (SDC) team from Pontificia Universidad Católica del Perú, which took first place at the event, walk to the stage with their robot at the awards ceremony for the E-Fest student competitions.
The Human Powered Vehicle Challenge team from Universidad Pontificia Bolivariana (UPB) in Medellin, Colombia, rounded out the top three overall at the HPVC at E-Fest South America. In addition to winning the $500 third prize with their entry, Falcon, the team placed second in the men’s speed race and third in the endurance and women’s speed events.

A student team representing E-Fest South America’s host university, Pontificia Universidad Católica del Perú (PUCP), was the winner of the $500 first prize at another major ASME student contest: the Student Design Competition (SDC). This year’s SDC challenge, “The Pick-and-Place Race,” tasked students with designing and remote-controlled devices that could quickly collect a variety of balls of different sizes from their stands and place them in a collection area without having the balls hit the ground as they were moved. The team from Universidad Michoacana de San Nicolás de Hidalgo in Mexico placed second at the event, winning $300, while students from Universidad de las Fuerzas Armadas ESPE in Ecuador took home the $150 third prize.

Other big winners at E-Fest South America included the recipients of the top three awards at the Old Guard Oral Presentation Competition: Sebastian Pinto of San Francisco de Quito (USFQ) and Daniel Saromo of PUCP, who each received the $750 first prize; Adrian Revolo of Universidad Nacional de Ingeniería and Xavier Sandoval from Escuela Politécnica Nacional, who each took home the $400 second prize; and Diana Folleco of Universidad de las Fuerzas Armadas ESPE and Ricardo Loayza from Escuela Politécnica Nacional, who each placed third in the competition and received $200. USFQ’s Sebastian Pinto and PUCP’s Daniel Saromo were also the winners of the $100 technical prizes at the event. 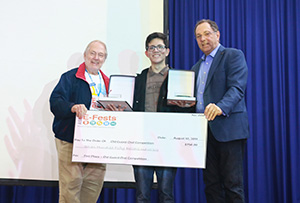 (Left to right) ASME Old Guard Committee Representative Rudi Landwaard, Daniel Saromo of Pontificia Universidad Católica del Perú, one of the two first-place and technical award winners at the Old Guard Oral Presentation Competition, and ASME Executive Director/CEO Tom Costabile.
Among the other student competition prize winners at the festival were Alejandro Laufer of Universidad San Francisco de Quito, who received the $350 first prize at the Old Guard Poster Competition; Andres Felipe Niño Hilarion of Universidad de los Andes, who won the $250 first place prize at the IAM3D Challenge; and Sanyog Lamsal, the winner of the first Designing Drones for Social Impact Challenge, which was sponsored by Stratasys, Siemens and ASME. Lamsal, whose entry was a modular attachment for disaster relief drones dubbed “The Savior,” received $500, a one-year subscription to Solid Edge Classic, and a one-year ASME student membership.

Eddy Rodriguez, who was a participant in the student competitions, was particularly enthusiastic about this year’s event in South America. “The experience of participating in an E-Fest is outstanding from every angle — the organization and the presentations were great and the competitions even better,” said Rodríguez, a student member from PUCP who was a member of the university’s first-place Student Design Competition team, along with fellow students José Alonso Ruiz, Antonio Sandoval and Luis Huanca.

“E-Fest definitely fulfilled my expectations and is a worthwhile experience for students,” Rodriguez continues. “It not only allows students to explore their creativity by designing a device or showing their research, but also allows them to expand their network by meeting students and professionals who are involved in similar activities. This will, of course, lead to new development opportunities for everybody.”

ASME member Orlando Rene Martinez Perez, who participated as HPVC head judge elect at E-Fest South America, concurred, describing the festival as an “amazing” event that exceeded his expectations. “I think that this kind of event provides students with [an appreciation] of the engineering life,” since it gives them the chance to interact with engineers from industry, he said. “I think that the communication and network that this event creates helps us to be better engineers,” he added. “Every student should be an ‘E-Fester’ once time in life.”

For more information on the ASME E-Fest program, visit efests.asme.