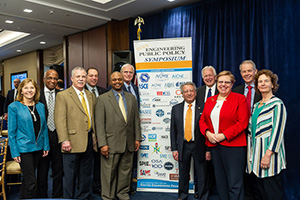 Members of the ASME Board of Governors at the 16th Annual Engineering Public Policy Symposium in Washington, D.C.
Leaders from across ASME recently convened in Washington, D.C., for a series of public policy events. The week kicked off on Monday, April 8, with meetings with the ASME Board of Governors and the Committee on Government Relations. Following their meetings, attendees were treated to dinner in the Capitol Building. Congressmen Paul Tonko and Raja Krishnamoorthi both attended the dinner and provided remarks. The evening was capped off with a private tour of the Capitol building.

On Tuesday, April 9, more than 150 leaders — presidents, presidents-elect and executive directors — from 45 professional engineering societies attended the Annual Engineering Public Policy Symposium, which was held on Capitol Hill in Washington, D.C. This was the 16th year that ASME served as the lead organizer of the event, which brings together organizations representing more than two million engineers nationwide. The symposium is designed to inform and engage leaders of the engineering community on public policy issues that are important to advancing research, technology, and the science and engineering workforce. The event is made possible by a grant from the United Engineering Foundation and its Founder Societies: ASME, AIChE, AIME, ASCE and IEEE-USA.

ASME President Said Jahanmir provided welcoming comments on “Federal Investments in Engineering and Science to Spur Innovation and Competitiveness,” highlighting the importance of research and development funding to the science and engineering community. More than 15 years ago, the National Academies discussed this issue in its report, Rising Above the Gathering Storm: Energizing and Employing America for a Brighter Future, whichJahanmir explained, “was instrumental to the development and adoption of the America COMPETES Act, as well as continued efforts by Congress to increase basic research funding.” The National Science Foundation reiterated this message in its most recent Science and Engineering Indicators report, stating that U.S. leadership in science and engineering is rapidly waning as major economies around the world continue to invest in boosting their science, technology, engineering and mathematics (STEM) capabilities. 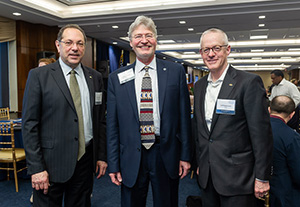 ASME’s Executive Director/CEO Tom Costabile (left) and Chief Operating Officer Jeff Patterson (right) with Dr. Walter Copan, Under Secretary of Commerce for Standards and Technology and Director of the National Institute of Standards and Technology (NIST).
Congressman Bruce Westerman of Arkansas, an engineer by trade, began the day by discussing the importance of investing in research and development (R&D) to ensure the technologies of the future originate in the U.S., as well as the need to place an emphasis on STEM and R&D funding at all educational levels, including in K-12.

Following Congressman Westerman, Dr. Walter G. Copan, Under Secretary of Commerce for Standards and Technology and director of the National Institute of Standards and Technology (NIST), provided the keynote speech in which he discussed NIST’s Return on Investment for Unleashing American Innovation Initiative and the Manufacturing USA Program. Dr. Copan explained how these new initiatives are helping to strengthen American manufacturing through the support of innovative partnerships between the government and private sector to drive advanced technologies into the marketplace. The Manufacturing USA network includes 14 institutes, each with a specific technological focus. Through this network, the institutes are working to create a stronger, more sustainable infrastructure for manufacturing innovation and R&D, including a strong and cohesive program for workforce development across the STEM disciplines necessary for leadership in manufacturing.

Continuing the theme of U.S. leadership in R&D, Matt Hourihan, director of the R&D Budget and Policy Program at American Association for the Advancement of Science, provided an in-depth review of the status of federal funding for science and engineering research, as well as an overview of President Donald Trump’s proposed budget request for Fiscal Year 2020. Hourihan noted that the president’s budget request called for a 14 percent reduction in non-defense R&D and noted that increases in the defense budget do not automatically translate into an increase in defense R&D. While decreases in funding have been proposed in many of the federal R&D programs in the president’s FY 2020 budget, many of these proposals have appeared in prior budgets and have been rejected by Congress in the past. 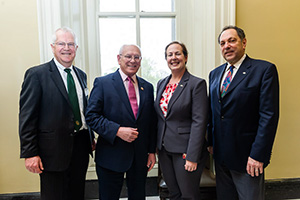 (Left to right) ASME Robotics Task Force Chair Chuck Thorpe, Rep. Paul Tonko of New York, ASME Bioengineering Federal Fellow Laurel Kuxhaus and ASME’s Executive Director/CEO Tom Costabile at the Board of Governors Dinner on April 8.
A point-counterpoint panel discussion on the topic of Investing in Research, Technology and Innovation to Bolster U.S. Competitiveness, built on the speaker’s presentations. The panel featured Robert Atkinson, president of the Information Technology and Innovation Foundation, and Stephen Moore, Distinguished Visiting Fellow with the Project for Economic Growth at The Heritage Foundation.  The discussion, moderated by, Lester Su, included a strong focus on research and development, as well as students and investing in STEM education programs at both K-12 and higher education levels, with contrasting views on how to implement stronger STEM curricula, as well as how to address the challenges both students and educational institutions currently face in funding higher education and world-class research.

Congressman Jerry McNerney of California, who has his Ph.D. in mathematics and served for several years as an engineering contractor to Sandia National Laboratories in New Mexico, concluded the event with remarks that succinctly tied together the themes of the day. McNerney spoke about his passion for the symposium’s focus areas and his participation in several Congressional Caucuses to advance the STEM workforce, R&D, manufacturing, and a number of distinct technology topics such as artificial intelligence, grid innovation, and other technology topics important to the science and engineering workforce and competitiveness of the U.S. manufacturing and high-tech sectors.

At the conclusion of the symposium, many attendees took the opportunity to meet with their members of Congress in the U.S. House of Representatives and U.S. Senate to strengthen their relationships with policymakers, inform them of the importance of investments in federally funded R&D, and to offer their services as a technical resource to policymakers.