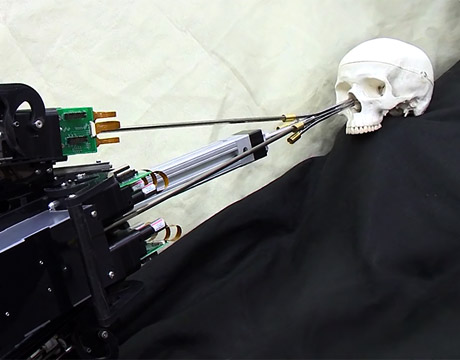 Trans-nasal brain surgery is one of the procedures that could become a reality thanks to new surgical technology. Image:  Vanderbilt University

Part of what is so incredible about the body is all the angular twists and turns. While it can be awe-inspiring, it also makes it difficult for surgeons to perform surgery and limit scarring. “You think of the nose, so many parts, you need to be able to work with difficult angles,” says Robert Webster, associate professor of mechanical engineering and electrical engineering at Vanderbilt University. “We’ve been working on trying to make that an easier challenge.”

Focusing on needlescopic surgery in his career, with its microscopic incisions, the beginnings of his work go further back for Webster than one might guess.

“This work really started at grad school for me,” says Webster, who also has secondary appointments at Vanderbilt University’s medical school in otolaryngology, neurosurgery and urologic surgery. “I had been working on actual needles. I was thinking about how we make needles to be used inside of soft tissue. How do we make them steer? Can we get them in open space in sinus cavities? That’s where the robot ultimately comes in.”

His team created a curvature robot with tubes in which you telescope them or change their axial direction. By doing that, a tube works like a tentacle in that it can elongate and bend. The material they were using was Nitinol, but it had its limits in the way it was used. “We’ve worked on this for years but then you realize if you could make those tubes tighter then we could make them better for surgery,” he says. “The material limits so that you can only curve it so much until plastic deformation. We overcame this by selectively cutting the tube. We made cuts through the tip almost all the way through and that creates small hinges that help it bend.”

Webster says the work could be particularly helpful for sinus surgeries. “When you think about all the nooks and crannies in the nose, that’s the first application we’re looking at,” he says. “But longer term, you could be looking at procedures in the abdomen if using needlescopic tools for it.”

A future challenge will be the surgeon interface. “We have the robot aspect pretty well built right now but we need to work on what we show visually," he says. "What is the robot holding and [what will] make it ergonomic for remote control for the robot?”

The ultimate goal is to vastly improve what can be a difficult conversation. “You look at what the doctors go through where they have to talk to the patient about cutting a hole in them and maybe not being able to guarantee that there won’t be complications,” he says. “If we can make the conversation a more positive one, that would be an important outcome.”

For Further Discussion
I was thinking about how we make needles to be used inside of soft tissue. How do we make them steer? Can we get them in open space in sinus cavities? That’s where the robot ultimately comes in.Prof. Robert Webster, Vanderbilt University