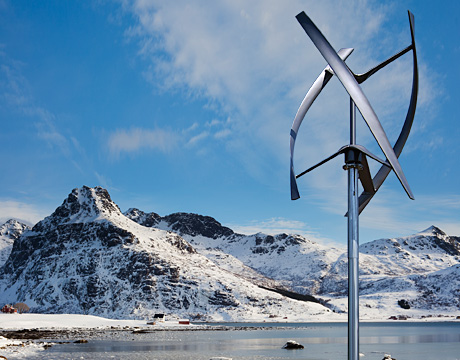 A telecommunications company providing mobile services in Scandinavia is readying a combination of systems using solar and wind power to replace its costly diesel-powered system.

The company began exploring alternative forms of energy because its 20-year-old system was supported by an unreliable grid in a highly remote location in northern Norway, and delivery of diesel fuel was becoming increasingly expensive. About six months ago, installation started on a distributed renewable energy solution as a replacement, consisting of one off-grid Urban Green Energy UGE-600 wind turbine, called the "eddy," and panels providing about 400W of solar energy.

The telecom will start to see savings when the system is up and running within a few months. Off-the-grid sites like this typically see payback in two to five years, says Mateo Chaskel, vice president of operations for New York City-based Urban Green Energy (UGE), the company engaged to develop the new system for the telecom project. Savings depend on how much energy a site consumes, with the range generally $10,000 to $20,000 per year, Chaskel says. Because this will be a relatively small site, running on a small turbine and solar array it will likely result in somewhat less than average savings.

The company is not alone in turning to an alternative to traditional forms of energy. In the past decade a number of companies and remote communities have begun replacing diesel-powered generators with wind and solar power due to both economic and environmental benefits.

Because of the extreme environmental conditions, there are extra steps and testing that must be done, especially for wind energy, because of the moving parts of components. Average temperatures in this Nordic area are below freezing for seven months out of the year, and the average nightly temperature is below zero degrees Fahrenheit in the winter. Additionally, solar radiation is effectively nonexistent in the winter since there are only about five hours of sunlight. The system is heavily reliant on wind energy during this period.

According to a 2008 report by Martin O.L. Hansen, an associate professor in the department of mechanical engineering at the Technical University of Denmark, icing can reduce power production of turbines operating under such conditions in a number of ways, including unbalancing rotors, causing anemometers to prevent startup even during high winds and misalignment of the yaw drive.

For such installations operating in such harsh environmental conditions, UGE's wind turbines have undergone special testing, including analyses of all components, identification of the right bearing lubrication, and also full-scale testing at a commercial cold-testing site in Inner Mongolia, chosen because it is not too far from UGE's manufacturing plant outside of Beijing. Before the full-scale testing, models are created in order to understand how the brittleness and strength of different materials might be affected under such intense wind loads in cold climates, such as ensuring the structural integrity of steel towers.

"Bearings have proven to be particularly sensitive to temperature fluctuation as temperature decreases to sub-zero," says Chaskel.

Analyzing bearing reaction to cold temperatures involves placing a bearing in a temperature-controlled freezer and allowing the entire component to reach the set point temperature. Parameters for torque and geometric dimensions, for example, are also taken into consideration to determine the best bearing configuration. While a decrease in bearing performance is to be expected in low temperatures, minimizing the effect by optimizing the configuration for durability is the goal, Chaskel says.

"Most important also is the type of lubrication when designing for cold environments," he says. "The challenge is finding a lubrication type with low viscosity changes and a low freezing point to ensure the turbine continues to operate within the design specification tolerance."

In addition, UGE sends out the composite of fiberglass, carbon fiber, and other materials it fabricates to produce the blades to be verified by independent laboratories.

UGE also analyzes mounting systems to confirm they are adequate for such extreme weather conditions. A special kind of steel may be required for very cold environments. Working closely with experienced tower manufacturers, UGE analyzes resonant frequency because of possible issues related to material stiffening, fatigue correlations, brittleness, and ultimate strength, all because of the harsh environment.

When all the components are ready, the turbine goes to the Mongolian test site. There, where temperatures can get to 40 degrees below zero during winter nights and rise considerably on sunny days, UGE can stress the wind turbine design in a large variety of ways and verify computational theories related to durability and performance. After this testing, "We can confidently deploy our products in the locations that matter most for the client," says Chaskel.

Because of the extreme environmental conditions, there are extra steps and testing that must be done, especially for wind energy because of the moving parts of components.Mateo Chaskel, VP-Operations, Urban Green Energy