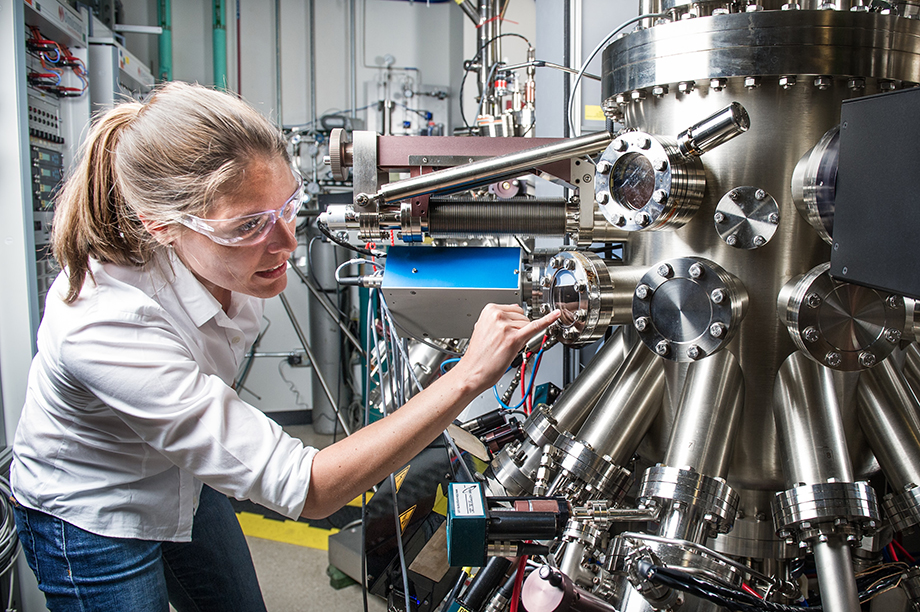 Diversity in STEM is so crucial to the growth and the future success of the engineering profession. Photo: Unsplash

Why is Diversity in Engineering a Major Opportunity?

Universities and schools have been working together to encourage a diverse group of students to explore science, engineering, technology, and math (STEM) across America. While the growth of women and minorities in STEM professions has been inconsistent and often sluggish, diversity programs are—slowly—doing the work they were designed to do.

Diversity recognizes that great ideas do not happen in a vacuum. Certainly, they take thought, ingenuity, and fearless creativity. But innovation thrives when teams find unexpected connections that were previously unseen. This kind of development requires a wide variety of perspectives and experiences.

Let us explore how diversity in STEM is so important to the growth of the engineering profession.


According to the World Economic Forum, lack of gender diversity in research fields persists across every developed economy to one degree or another. Across the globe, for example, fewer than 30% of professional researchers are women.

Recommended for You: Pathway to STEM

“According to research, there are a number of reasons why minorities and women have a harder time accessing STEM educational paths and find it harder to persist through graduation,” said Germán A. Cadenas, assistant professor of counseling psychology at Lehigh University’s College of Education.

“Most of the reasons are systemic barriers that are outside of their control,” he said. “These include systemic racism and sexism, lack of mentorship that is culturally responsive, financial pressures, challenges in navigating higher education as first-generation college students, and inequities in the level of preparation they receive when attending underfunded schools that largely serve minority students.” 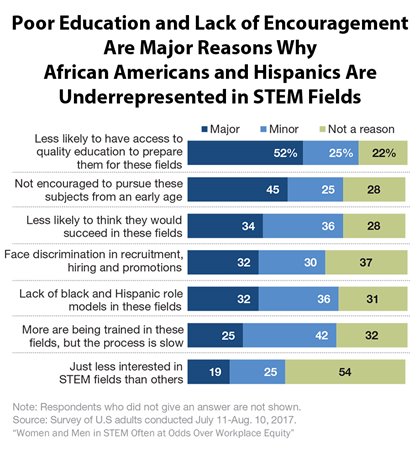 As early STEM opportunities for minorities and women increase, the likelihood that they would participate in future STEM careers increases as well. Photo: Pew Research Center
In the United States, women account for more than 55 percent of all college students. Yet the gender disparity in postsecondary STEM education is pronounced. In 2016, women in STEM earned just 35.5 percent of bachelor’s degrees, 32.6 percent of master’s degrees, and 33.7 percent of doctorates, according to research from Catalyst, a nonprofit that improves workplaces for women. Although women hold close to 60 percent of bachelor’s and master’s degrees in biology-related fields, in others — such as engineering and computer sciences — their representation ranges from 18.7 percent to just over 30 percent, respectively.

The task of reversing decades of under-representation in STEM, however, is a very long process, and the devil is often in the details. For instance, when the Pew Research Center looked at the broadest definition of “STEM worker” in 2018, it found that the overall percentage of women in STEM fields has risen modestly since 1990. Women represent more than half of all American employees. Yet, most of these positions were concentrated among healthcare practitioners, nurses, and technicians.

Yet, in so-called “hard” science jobs, women remain far behind men. The number of women in the fastest-growing STEM discipline, computer-related occupations, actually fell 7 percent since 1990.

The story is pretty much the same for under-represented minorities. In 1990, only 17 percent of the workforce was made up of minorities. In 2018, that percentage rose to 31 percent. The difference is primarily due to Asian workers, who more than doubled their participation to 13 percent of the STEM workforce by 2018. Over the same period, the percentage of African Americans rose 2 percent to 9 percent, while Hispanics rose 3 percent to 7 percent.


Many other advantages come from pursuing stronger diversity in the STEM fields. These advantages are one reason why Reuters introduced a standard Diversity and Inclusion Index in 2016.

These advantages include:
For more information visit: ASME's Diversity and Inclusion

Minorities and women are gaining ground in STEM as a whole, even as engineering lags far behind healthcare and biology. Still, diversity has become a marquee issue today and one that major companies, educators, and governments are actively engaged in trying to solve.

Kayla Matthews is a technology writer at WriterZone, Pittsburgh, Pa.