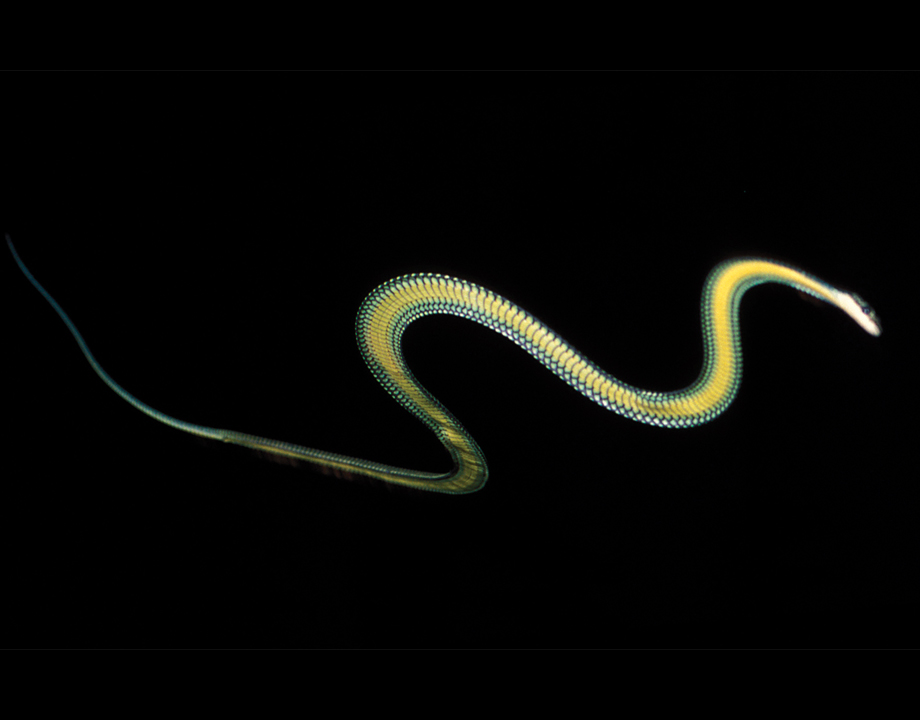 Building Equipment Contractors Electric Power Oil and Gas Extraction Robotics
The flying snake doesn’t so much fly as glide, much the same as flying squirrels. One difference is flying snakes don’t have visible characteristics that aid their glides, like the flying squirrel’s parachute-like membrane. How snakes fly—often around 300 feet from one treetop to another—has long been of interest to Jake Socha, a professor of biomedical engineering and mechanics at Virginia Tech.

For the past two decades, Socha has measured and modeled the biomechanics of snake flight. All snakes in the Chrysopelea family—the only known limbless vertebrates capable of flight—glide in the same manner. Mostly found in Southeastern Asia, they soar by using their ribs to stretch out their body into a flattened strip. 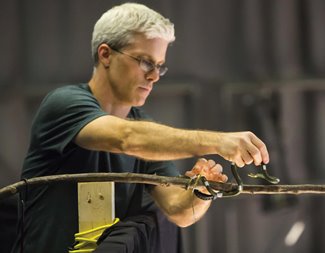 To study flying snakes, researcher Jake Socha placed as many as 17 infrared-reflective markers on their bodies. This returned high-resolution data while allowing the animals to move freely. Photos: Michael Diersing, Jake Socha
Though their flights generally last only a couple of seconds, at a speed of around 25 miles per hour, flying snakes control their glides, Socha said. Over the years, slow motion photography demonstrated that while the snakes undulate their bodies during flight, their head remains relatively stable. But why?

“Is it a flight control strategy or a non-functional vestige of lateral undulation?” Socha asked.

Editor's Pick: How Happy are Mechanical Engineers at Work?

He thought there was much more to it than ancient snake muscular programming. Through years of research, Socha discovered that when paradise tree snakes glide through the air, they flatten their bodies to provide lift. But as they glide they seem to swim, undulating their bodies from side to side. The snakes make so many choreographed movements that Socha knew must be intentional.

Socha and his team recently used motion capture technology to study snake gliding in precise detail. Their models reveal that undulation is vital for the snake’s stability as it glides from branch to branch. In June, the team demonstrated that aerial undulation in snakes serves a different function than for other animals that move by undulating. In research published in the journal Nature Physics, they pinpointed how this movement aids the flying snake.

For the past seven years, Socha has worked with Kevin Crofton, a professor of aerospace engineering at Virginia Tech, to model snake flight. They’d previously modeled motions in parts—first in three parts, as a trunk, a middle, and an end; and then via many linkages across the body. Through previous research, they had found that a snake’s aerial undulation is composed of horizontal and vertical waves, whose phases differ by 90 degrees and whose frequencies differ by a factor of two.

For their recent article, Socha and his team developed a three-dimensional mathematical model of snake flight that uses those measurements and incorporates aerodynamic and inertial effects.

“This is the first model that’s continuous,” said engineering professor Shane Ross, a member of the team. “It’s like a ribbon. It’s the most realistic to this point.”

The researchers modeled the snake’s movement without including the wavelike motions. The digitalized body quickly fell. The test, paired with simulated glides that kept the waves of undulation going, confirmed the team’s hypothesis: Aerial undulation keeps them rotational stable as they move through the air.

The oscillating movements also increased the horizontal and vertical distances the snakes could travel.

More for You: Georgia Tech’s Slothbot is Engineered to be Slow

“Although simulated glides without undulation attained some horizontal distance, they are biologically unrealistic because they failed due to roll and pitch instabilities. In contrast, the inclusion of undulation stabilized the rotational motion and markedly increased glide performance,” the researchers wrote.

The team plans to next run outdoor experiments to gather motion data from longer glides. They’re looking ahead to creating robots that could not only glide, but to actually fly.

Right now, the virtual flying snake always glides down, like the real animal.

“But what if they could get it to move so that it would actually start to go up? To really fly?” Ross asked. “That ability could potentially be built into the algorithms of robotic snakes, which have exciting applications in search and rescue and disaster monitoring.”

Jean Thilmany is an engineering writer based in Saint Paul, Minn.