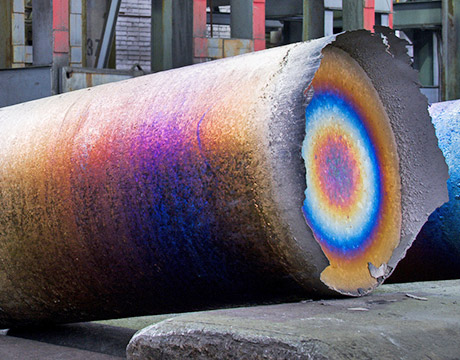 Some of today’s most sophisticated technologies incorporate components made of high-performance specialty metals and alloys like nickel, niobium, and titanium. Despite fancy end-uses in missiles, mobile phones, and medical scanners, these costly high-end metals areproduced using inefficient, error-prone methods frozen in time since “Rosie the Riveter’s” day. But leaner, greener technological updates may lie ahead, thanks to a new process monitoring technology originally developed by U.S. Department of Energy engineers.

The specialty metals industry loses hundreds of millions of dollars a year to the inefficiencies of one crucial but poorly controlled secondary purification process known as vacuum arc remelting (VAR). It’s an expensive, time-consuming process used only on certain high-value materials. The multimillion-dollar electric furnaces used for VAR consume (and largely waste) enormous amounts of energy, pose the risk of explosions, and allow flaws to occur in these expensive finished products. The DOE-developed monitoring technology known as arc position sensing (APS) is possibly the first step forward for VAR in 65 years.

The ABCs of VAR

As a secondary processing step, VAR is performed on an alloy that has first been formed into a consumable electrode: a large cylinder of metal that fits within a similarly shaped copper crucible of slightly larger diameter within the 20-ft-tall VAR furnace. The electrode is enclosed in the crucible and the furnace is brought to a metallurgical vacuum. Then the electrode is exposed to several kiloamperes of dc current, which creates an electrical arc that heats the alloy to its melting point. Once it has fully melted and resolidified, the finished ingot is ready for inspection, grading, and eventual sale to customers.

Maintaining a constant melt rate is critical to prevent surface flaws and other imperfections. But that’s no simple matter. The complexities of the heat transfer processes occurring during the melt cycle demand a high degree of control over the level of current, crucible temperature, and the gap between the electrode and the crucible side walls. The inability to visualize or measure events inside the furnace is a major limitation.

APS provided the first glimpses inside the VAR furnace and gave manufacturers a degree of control over the melting cycle. APS was developed during the past five to 10 years by engineers Paul King and Rigel Woodside at DOE’s National Energy Technology Laboratory.King’s mentorship inspired Woodside’s interest in VAR furnaces during graduate studies at nearby Oregon State University (Corvallis, OR). Through their work at NETL, the two further developed the idea with support from the Special Metals Processing Consortium under a Cooperative Research and Development Agreement and from Oregon Best, a regional clean technology business accelerator. A $150,000 grant from Oregon Best in 2015 funded a key collaboration between King and Woodside’s original start-up company, KW Associates, and Oregon State engineering professor Kyle Niemeyer. Niemeyer and graduate student Miguel Soler performed additional verification of the sensing method and analyzed the effect of the electrical arc position on ingot solidification. “Our work helped show the validity of the sensing approach and also motivated some newer efforts into controlling the arc to get desirable ingot properties through solidification,” Niemeyer said.

Their approach employs a system of electric current sensors on the VAR furnace walls to measure the position and behavior of electric arcs in real time. The patterns of arc movement have a significant effect on the efficiency of the melting process, which ties directly to the integrity of the finished ingot. APS enables manufacturers to observe and track the position of the arcs, and to quantify the relationship between arc location and product defects. These measurements increase process control and improve safety by identifying and automatically avoiding hazardous conditions such as side-arcing: an explosion risk. APS earned an R&D 100 award in 2013.

King and Woodside recently launched the company now operating as Ampere Scientific, Corvallis, OR, where they are currently developing capabilities for fine control of the arc with tailored magnetic fields. The start-up recently landed a $225,000 Small Business Innovation Research grant from the National Science Foundation to further refine and test its VARmetric fine-control system, which they dub the “MRI of remelting furnace systems.”

Their new application couples APS with standard process signals to evaluate process dynamics and correlate them with product quality measures. Software modules for observation and analysis work together to provide real-time information and event detection during melts and to process data, generate reports on arc distributions and indicate melt quality. The increased efficiency achieved by this heightened level of fine-tuning could potentially reduce energy consumption by 30,000 MWh per furnace each year, the company states.

Ampere is currently working with nearby specialty metals producer ATI, Millersberg, OR, to field-test and refine the technology. "The specialty metals industry in the U.S. is a $25-billion industry, and 40% of that is from direct sales of ingots produced in VAR furnaces," says King. He estimates VAR efficiency gains made possible by APS could reduce the specialty metals industry’s overall electricity use by 25% while “reducing much of the $800 million in lost revenue through material waste and associated electrical inefficiencies each year.”

This technology could reduce much of the $800 million in lost revenue through material waste and associated electrical inefficiencies each year.Paul King, Ampere Scientific