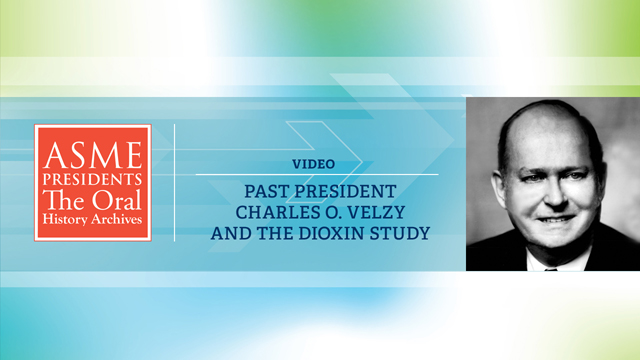 Video: Past President Charles O. Velzy and the Dioxin Study

Charles O. Velzy was the 108th president of ASME, serving the one-year term in 1989-1990. When Velzy gave an oral history to the Society's History and Heritage Committee in 1995, the engineer recalled how questions about dioxin emissions from municipal waste combustion facilities came to the attention of the Society.

The issue surfaced at the 1980 Biannual Conference of the ASME Solid Waste Processing Division, in the wake of reports coming out of the United States and Europe indicating that airborne dioxin emissions increase when higher levels of polyvinyl chloride plastic, or PVC, are added to the waste stream of municipal waste combustion plants. As Velzy tells it in the oral history, many people in the waste processing industry were not convinced about the validity of these reports, and called for studies based on stronger engineering analysis.

Velzy chaired an ad hoc committee to provide the scope and framework for a comprehensive, science-based study into the dioxin issue. ASME commissioned the study, which was published in 1995. According to the authors, "The hypothesis that fuel chlorine content and combustor flue gas dioxin emissions are related was not confirmed by the data..."

According to Velzy, working on the study was exciting, and it also provided lessons. "The public does not understand the critical role of sound scientific and engineering analysis to assess oftentimes misconceived notions of environmental damage brought by certain technology," said Velzy. "The dioxin project showed that there is a correct approach to dealing with environmental issues, one that is based on sound engineering."

Read more about Past President Charles O. Velzy and the Dioxin Study