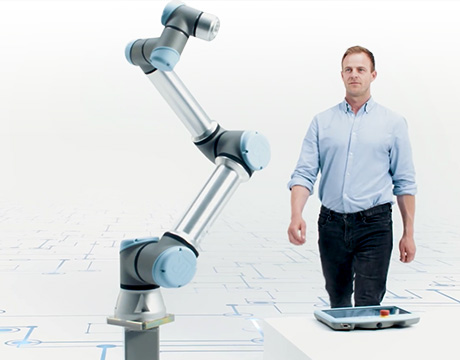 In Part One of this story, we took a look at how Universal Robots’ UR5e is helping to usher in a new era of affordable collaborative robots. Here, we explore why Wall Street is interested in the cobot market.

Teradyne and Universal Robots are the types of success stories ROBO Global wants in its portfolio. ROBO is what is known as an exchange traded fund. It invests in stocks (in this case, robot-related stocks) and trades on nine exchanges around the world like any other stock.

ROBO Global invests in a wide range of companies with significant investments in robots, automation, artificial intelligence, 3D printing, actuators, sensors, and application-specific companies. Small and mid-cap companies (with stock values below $2 billion) make up 77 percent of its portfolio.

Chris Buck, the fund's head of capital markets and sales, argues that ROBO Global is a conservative way to invest in the "robots-automation-artificial intelligence sector."

In the five years since the fund launched, several similar ETFs have come to market. Their portfolios often invest heavily in a small number of market leaders, he said. This makes them vulnerable, because those leaders are vulnerable to technology changes.

While ROBO also looks for leading businesses and technologies, it does not place large bets on any of the companies in its portfolio.

"Our top 10 out of 87 companies represent only 15 to 18 percent of investment," Buck said. "We try not to pick winners, but cast a wide net over the ecosystem. We want to ride the megatrend wave."

While many investors believe robots are a good bet for the future, the cooperative robot segment exemplified by Universal could prove even better, according to Henrik Christensen, who attended a conference held by ROBO Global prior to the bell ringing ceremony. Christensen heads University of California, San Diego's Institute for Contextual Robotics and is lead editor of the U.S. Robotics Roadmap. He is also one of ROBO Global's advisors.

Collaborative robots now make up only a small fraction of the industrial automation market. Universal, for example, has only sold 27,000 UR robots since its inception--about as many as the total number of robots sold in the United States in 2017. Yet the International Federation of Robotics expects cobots to account for 34 percent of sales by 2025, Christensen said.

He expects robots (as well as automation) to play a major role in mass customization, building products to specific customer requirements. This trend would put a premium on plants located closer customers. This may eventually affect global trade. While the supply chains of developed nations have moved to low-wage nations like China, he believes robots and other advanced technologies could lead to increased on-shoring over the next 10 to 15 years.

Christensen also addressed Chinese competition in robots. Chinese salaries have risen 350 percent over the past 10 to 15 years, while U.S. salaries have remained flat. This puts pressure on China to find new ways to compete with U.S. manufacturers. One way is to invest in robots.

"China is already building components for robots, but they are at least a factor of five worse than those built elsewhere. Their lifetime is lower. It's hard to play catch up in a fast-moving industry," he said.

Still, he noted that China's Midea Group recently purchased Germany's Kuka, and could use its IP to accelerate China's learning curve. He expects it will take five to 10 years for China to make a truly competitive robot. All that time, robotics firms in developed nations will be pushing hard to increase capabilities.

Which suggests that Universal's robot may not be the last to ring the bell at the end of trading on the New York Stock Exchange.