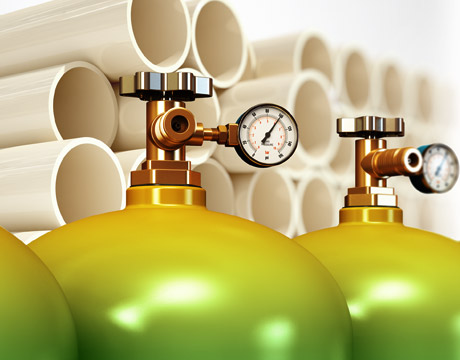 Turning CO2 into a Good Guy

Many consumer plastic products are made frompolyethylene terephthalate (PET). About 50 million tons of PET are produced globally every year. Manufacturing PET and other plastics produces significant amounts of carbon dioxide (CO2), a greenhouse gas that contributes to climate change. For example, using fossil-fuel feedstocks generates more than four tons of CO2 for every ton of PET that is manufactured.

To improve this situation, scientists are turning this harmful gas into a manufacturing asset by using it as a feedstock for plastics, thereby reducing greenhouse gas emissions. In this way, CO2becomes a renewable raw material that is always abundant and readily available.

PET is a product of terephthalic acid and ethylene glycol. Stanford University researchers have discovered a way to make plastic from carbon dioxide and inedible plant material, such as biomass, by using polyethylene furandicarboxylate (PEF) instead. PEF is made from ethylene glycol and 2-5-Furandicarboxylic acid (FDCA), which can be sourced from biomass instead of petroleum. The biggest problem with FDCA is finding a low-cost way to produce it. By combining carbonate with CO2 and furoic acid, the team formed a molten salt that converts easily to FDCA. “The next step—transforming FDCA into PEF plastic—is a straightforward process that has been worked out by other researchers,” says lead researcher Matthew Kanan, assistant professor of chemistry at Stanford.

Scientists at the University of Bath have successfully made a safer type of polycarbonate (PC) from sugar and carbon dioxide. Current manufacturing methods for PC often use toxic substances such as BPA and phosgene. Their new type of polycarbonate easily biodegrades back into carbon dioxide and sugar, using enzymes from soil bacteria. The production process can be done at low pressure and room temperature, making it a cheaper and safer process. The new plastic is also biocompatible and therefore may have medical applications.

Germany-basedCovestro recently announced it has developed a process for producing high-quality plastics using CO2. The company is using the technology to make a novel polyol for the production of flexible, CO2-bearing polyurethane foams designed for mattresses and upholstered furniture.

“With CO2 as a carbon source, we can increasingly dispense with traditional, fossil sources such as petroleum,” says Christoph Gürtler, head of catalysis research at Covestro. “After successfully incorporating it in a key precursor to flexible foam, we are now tackling new challenges.”

Another company working with CO2-containing foam is Novomer, a Massachusetts-based technology company with a set of proprietary catalysts that enable carbon dioxide to be used as a raw material in the production of plastics. Ford Motor Company has partnered with Novomer to developing foams and plastics using captured carbon dioxide. The company is intent on using captured CO2 as a feedstock for the production of vehicle seats and under-the-hood components. By using foams and plastics with up to 50 percent CO2-based polyols, Ford intends to reduce its petroleum consumption by more than 600 million pounds per year.

"We’re sequestering CO2 to make things we need to use, just like living plants do,” says Bill Ford, executive chairman for Ford. “Except instead of producing complex sugars the way plants do, Ford is taking excess carbon dioxide and making durable plastics to use in vehicles.”

There are plenty of benefits from using CO2 in plastics. It is a highly sustainable way to use an abundant, harmful waste product for the production of more environmentally friendly products. These technologies provide low-carbon alternatives to plastic bottles and other items currently made from petroleum. Because CO2-bearing plastics require fewer petroleum inputs, they are easier to recycle. Widespread adoption of CO2-bearing plastics would significantly cut both greenhouse gas emissions and petroleum consumption in the manufacture of plastics.

The Stanford team is especially excited about the potential to reduce greenhouse emissions, because the CO2 required to make the PEF can be obtained from fossil-fuel power plant emissions or other industrial sites. Products made of PEF can also be recycled or converted back to atmospheric CO2 by incineration. Eventually, that CO2 will be taken up by grass, weeds and other renewable plants, which can then be used to make more PEF.

"Our goal is to replace petroleum-derived products with plastic made from CO2," says Kanan. "If you could do that without using a lot of non-renewable energy, you could dramatically lower the carbon footprint of the plastics industry."