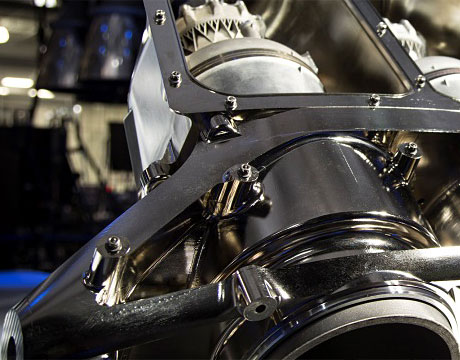 The year 2015 saw 3D printing continue its march into every dimension of our lives. With new materials, new methods, and new applications, the young field is revolutionizing prototyping and manufacturing, and changing the worlds of design, medicine, construction, and, of course, hobbying.

What were the key developments of the year that brought us closer to 3D utopia? Brian Federal gave us his favorites. Federal is a filmmaker out of North Carolina, and a “3D printing evangelist” as he describes himself. He’s currently producing a feature length documentary called “3D Printing Revolution.” Here’s what wowed him in 2015.

1) The Printing Welder The size of most 3D printed objects is constrained by the size of the 3D printer they’re printed in. A group of Dutch manufacturers stumbled on this little fact when they were looking for a way to 3D print furniture. So they invented their own method. “The innovation is a robotic arm with a print head that extrudes metal strong enough to support structure,” says Federal. Working with Autodesk and the Heijmans construction company, they’ve managed to print a model of a bridge that will eventually span a canal in Amsterdam. “This is a small step into the much broader field of Construction Automation.”

2) Speed Printing The vast majority of 3D printing technologies use a layer-by-layer strategy (hence the word “additive.”) For the user, the method has some serious disadvantages. Chief among the complaints is the eons it takes to complete a job. But the building-up tactic also limits potential materials, increases that chance of introducing flaws, and reduces an object’s ultimate strength. Carbon3D’s CEO Joseph DeSimone wants to change all that. Inspired by a morphing bad guy who rises from a molten puddle in “Terminator 2,” their “Continuous Liquid Interface Production” approach creates monolithic forms out a pool of polymer. And it happens to be 25 to 100 times faster than other printers on the market, with the potential, according to DeSimone, to be 1000 times faster. “Securing a tap from The Ford Motor Company, and $100,000,000 in Google Ventures cash, these guys are set to deliver a broad spectrum of innovation,” says Federal. “This is a company to watch.”

3) Powerful Personal Applications The world of biomedicine is where 3D printing technology has the greatest potential to significantly alter people’s lives for the better. It’s arguably where tailored one-off items are most in need. 3D printed implants and prosthetics have helped many, but what could be more miraculous than letting the paralyzed walk. Scott Summitt’s 3D Systems partnered with Ekso Bionics to do just that. “The Ekso Bionics suit fits to a person’s body perfectly and will enable a spinal injury patient without the use of their legs the ability to walk again,” says Federal. 3D Systems gave Amanda Boxtel, who had been in a wheelchair for years, a full body scan. They were able to then make form-fitting parts (for spine, shin, and thighs in her case) that integrated seamlessly with the moving parts of an exoskeleton. As a result, Boxtel was able to walk again. Now Ekso Bionic is producing the system for anyone that needs robotic assistance.

4) Prints in Space A rocket engine is no game-piece to be sold on Etsy. But that doesn’t mean you can’t 3D print one—or most of one. In fact, doing so gives you the option to test and retest more quickly and cheaply than any other manufacturing technique. Test and retest is just what Elon Musk and his engineers at SpaceX have been doing for years with their 3D printed SuperDraco rocket engine. This year the rocket finally got off the ground. “The innovation of a new, primarily 3D printed, reusable rocket is exponentially delivering new opportunities in space travel, mining, and colonization,” says Federal.

5) On the Cheap Whatever miracles 3D printing may be bringing to space travel, to the injured, and to manufacturers, as a household phrase “3D Printer” has just one meaning: a tool that allows anyone to produce as much goofy plastic stuff as they can dream up. Many companies have aimed their products at this everyman market, but XYZ seems to stand out. “The innovation here is the price point and massive sales distribution,” says Federal. The company’s CEO, Simon Shen has said that, with the Chinese government, he plans to deliver 3D printers to every school in China. “Wish I was hearing that kind of commitment here in the good old USA,” says Federal.

6) Phone Printer Of course, no technology has been truly democratized until it can be done with a cell phone. Now Jeng-Ywan Jeng, a professor of mechanical engineering and the dean of the engineering department at the National Taiwan University of Science and Technology, has invented a printer that uses light from a cell phone to polymerize liquid resin. “This product is not on the market yet but I have seen test prints that had remarkable resolution,” says Federal. “This innovation could be a major disruptor with the addition of tablet and TV versions that will bring cost to print down dramatically.” Jeng’s dream is to have the phone make the scan and then use its light in the tiny printer to print the end product. And maybe someday we’ll be printing as much as we’re currently texting.