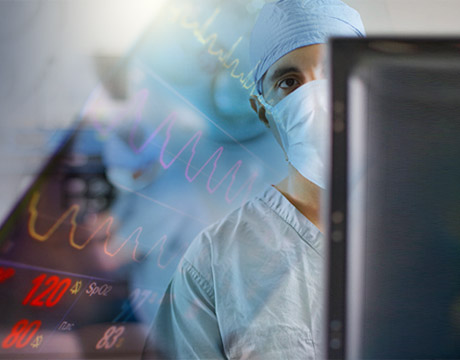 As technology continues to drive the pace of progress in biomedical research and healthcare, the traditional line between engineering and medical science grows ever thinner. And as medical machines and the computers that power them become smaller, faster, and smarter, the medical device industry is making medical practice easier for doctors, more effective for patients, and cheaper for the entire healthcare system.

According to industry observers, one sweeping change is a “convergence” of consumer-focused technology into the once-rarified world of device design. As Med Device Online’s executive editor Jim Pomager recently blogged, increased life expectancy will fuel big increases in the incidence of age-related conditions such as heart disease, dementia, stroke, pulmonary disorders, and cancer. Wireless technologies capable of detecting and treating the earliest signs of disease will become front-line defenses against these leading causes of death, while devices that help patients manage their own chronic conditions more effectively will dramatically improve their quality of life while reducing the demand for more advanced treatments, he said. Consumer-friendly wearable or unobtrusive monitors comprising a range of sensors and communications devices. Pomager identified several industry collaborations between large device developers and technology companies to incorporate a wide range of medical measurements in simpler devices.

For a sense of how these trends are manifesting themselves today, here is a selective overview of five of the most talked-about directions in medical device technologies of the past year.

Nanotechnology is fulfilling medical science’s need for more precise treatments that are less invasive, less costly, and less complicated to administer than traditional methods. That translates into better patient outcomes, lower healthcare costs, and wider access to healthcare services in under-resourced parts of the world.

Medical nanodevices and materials are already in widespread use. Inorganic nanoparticles of materials synthesized from metals such as gold or silver and ranging in size from 1 to 100 nm are commonly used as contrast agents in in vivo tumor imaging and as molecular probes for the study of cellular or subcellular function. Quantum dots fabricated from semiconductor materials are similarly valued as alternatives to fluorescent proteins, organic dyes, or radioisotopes. Also for you: 5 Innovative Medical Technologies

But not all medical applications of nanoparticles are as passive as these imaging tools. In fact, emerging cancer treatment technologies employ nanomaterials in ways that are not merely hands-on, but downright aggressive. For example, researchers at Israel’s Bar-Ilan University have developed what they call nanobots to target and deliver drugs to defective cells while leaving healthy ones unharmed. The 25-35 nm devices are made from single strands of DNA folded into a desired shape – for instance, a clamshell-shaped package that protects a drug while en route to the desired site but opens up to release it upon arrival. Led by Bar-Ilan professor Ido Bachelet, the team has so far developed DNA robots that can recognize 12 different cancer cell types, and is now working to program swarm behavior into bots designed to physically bond in the body for the other applications such as tissue or nerve repair.

A similar targeted approach developed by University of California-San Diego nanoengineers Joseph WangandSadik Esener uses a so-called microcannon to blast a tumor with anti-cancer drugs with dead-eye precision. Building on the classic concept of a magic bullet for cancer, the engineers have developed a method of firing nanoscale “bullets” containing drugs at targeted sites in the body. Their approach uses ultrasonic waves to guide the nanoparticles to their destination, trigger the release of their therapeutic payload, and make the selected tissue more permeable to the drug. They fashioned their 5-micrometer microcannon from a porous membrane coated with graphene oxide and gold. For ammunition, they encased 1-micrometer silica particles in a liquid gel containing perfluorocarbon (PFC) as a propellent. The PFC vaporizes when exposed to pulsed ultrasonic waves, producing gaseous microbubbles that expand rapidly to propel the nanobullets toward their target.

In his 2015 State of the Union Address, President Obama called for a renewed focus on the development of more advanced artificial limbs and other prosthetic devices. At least 100,000 Americans live with an upper-arm amputation, and 6 million others are paralyzed. In response, the Defense Advanced Research Projects Agency (DARPA) has redoubled its efforts to drive performance and reduce the six-figure price tag of existing devices that translate a user’s neural signals into computer-controlled limb movements. These brain-machine interface (BMI) technologies have advanced rapidly since their highly publicized 2012 debut. With the FDA’s approval of DARPA’s design, other groups have launched clinical trials of newer devices designed for safe use in the home environment rather than under the supervision of laboratory personnel. Although many approaches involve the direct implant of a sensor into the brain itself, newer research focuses on the use of external devices such as headsets to relay brain signals to limbs, wheelchairs, or other assistive technologies.

One novel twist on paralysis repair seeks to regenerate damaged spinal cord tissue with spinal implants made of multifunctional polymer fibers, each thinner than a human hair. Positioned alongside damaged neurons, the fibers can be configured in a number of ways to deliver drugs, transmit electrical signals, or guide light beams used as optical nerve switches. Developed by materials scientists and engineers at Massachusetts Institute of Technology, the nerve repair fibers can also be assembled as scaffolds or 3-D structures to support natural nerve tissue as it regrows. Program leader Polina Anikeeva said the technology could one day improve the treatment not only of spinal cord injury but also of neurological and neuropsychiatric disorders from Parkinson’s disease to schizophrenia.

3) New Take on a Classic Tool

The humble stethoscope is back and coming to a smartphone near you. This fixture of every kid’s toy doctor kit has been outshone by today’s arsenal of sophisticated electronic diagnostic tools. Doctors and nurses still pay attention to a patient’s heart and lung function, of course, but now it is often easier and more definitive to order x-rays, electrocardiograms, or other, more advanced tests. But a new electronic take on this old-school tool, the Eko Core (Eko Devices, Berkeley, CA) attaches to an analog stethoscope to provide seamless analog and digital sound, which it transmits using Bluetooth to the cloud, from where a doctor can download it to a smartphone. Selected by Time magazine as one of the top inventions of 2015, the scope does the listening for the doctor, who can visualize waveforms in real time, record and playback body sounds, share recordings, and store data in the patient’s electronic health record in compliance with federal patient privacy rules. The scope could help reduce healthcare costs related to unnecessary specialist care by helping general practitioners take more advanced measurements on their own.

The pulse oximeter has been one of the most widely used devices for hospital patient monitoring for decades. These compact devices typically are clipped on a patient’s fingertip to measure levels of oxygen saturation in the blood – a critical measurement for anesthetized hospital patients during surgery and intensive care for decades. The global market for these devices was on track to reach $1.3 billion in 2018, with sales of devices for home monitoring use on the uptick. For conditions such as chronic obstructive pulmonary disease, sleep apnea, and a range of cardiovascular diseases, remote monitoring of pulse oximetry measurements is a valuable way for doctors to keep in touch with their patients without the hassle of a clinic visit.

Two new wireless personal pulse oximetry devices were introduced at this year’s Consumer Electronics Show (CES) – perhaps the ideal place to observe the convergence of the healthcare and consumer tech markets. The MyOxy monitor from Bewell (Paris, France) is a Bluetooth-based device that integrates oxygen saturation with other patient measurements such as temperature and blood pressure into one smartphone or tablet app. The MightySatfrom Masimo (Irvine, CA) can track a patient’s results from patients while they are in motion, reportedly a first for a fingertip oximeter designed for home use. Also incorporating Bluetooth, the device interfaces to an Apple or Android app.

The technology known as CRISPR (for clustered, regularly interspaced, short palindromic repeat) has emerged with breathtaking speed as a disruptor in the life sciences realm. It has even been called the “discovery of the century.” Many science journalists wrongly predicted the 2015 Nobel Prize in Chemistry would go to two of the scientists credited with its meteoric rise – Jennifer Doudna and Emmanuel Charpentier – only three years after their 2012 publication revealing the ease and utility of CRISPR for gene editing. The genetic sequences that give CRISPR its name are part of an immune response to bacteria. Recently scientists have found ways to use the material to block or add in specific genes to an organism’s genetic code to achieve desired results. Although the high-precision task of slicing and dicing stands of DNA is very much an engineering challenge, CRISPR is a bit out of place on this list because it is not, in and of itself, and engineered device. Still, it so significantly reduces the time and cost of gene editing that it is driving very rapid changes that will ultimately effect a wide range of engineers working in the biomedical realm. The impact of technique on science is often compared with the polymerase chain reaction (PCR) method that transformed genetic engineering 30 years ago. While PCR’s gene amplification method helped decode the human genome, CRISPR provides the real possibility of adjusting the genome to achieve desired goals: elimination of genetic diseases, eradication of pathogens, and so forth.