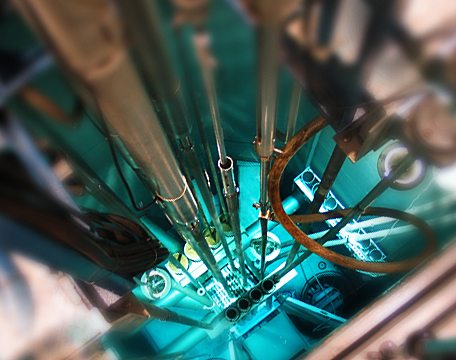 As the nuclear industry begins to shift toward small modular reactors as the best solution for low-carbon power for future generations, nuclear engineers at the Center for Advanced Energy Studies (CAES) in Idaho Falls are hard at work on new passive safety systems. These will have new ways of cooling and shutting down reactors in an emergency without certain actions from an operator or electronic system.

In a passive safety system, the reactor can shut itself down by using the basic nature of physics, such as gravity, says Dr. Fatih Aydogan, assistant professor in the mechanical engineering department at the University of Idaho’s nuclear engineering program. Water-cooling systems could run by gravity rather than pumps, he explained.

While there has been interest in passive safety systems for more than a decade, activity has been stepped up in the past three years. “Safety systems are a critical topic after the Fukushima Dai-ichi accident,” says Aydogan referring to the earthquake and tsunami that resulted in permanent damage to reactors at the Japanese nuclear power plant.

“I do not want to reinvent the wheel so first I looked at different designs in the world for their pluses and minuses. Now I am trying to bring all the pluses into the next generation [of safety features],” says Aydogan. For example, one design from Japan uses a new pump for the coolant that has no mechanical parts.

“In the beginning, I thought it would be a piece of cake,” he says, but after a short time he realized there were as many as 40 different kinds of safety designs. “Right now I am trying to bring all of these ideas together.” All this while also meeting any recently changed design requirements as well, he says.

The U.S. Department of Energy has increased its support for the use of small modular reactors in the U.S. as part of its push for clean, affordable nuclear power options. Building smaller reactors lowers capital costs for each project, are faster to build, and offer more flexibility in where and for what purpose they can be used.

Prior to his appointment at the university in 2012, Aydogan spent five years as a technical lead on small modular reactor design in Westinghouse Electric’s nuclear power program. He says his goal when he joined the university was to increase the safety of nuclear systems by making them passive, affordable, simple, and useful for modular systems that are built at the factory, shipped to a site, and installed. In the past, many parts of systems were typically manufactured on site, and that increased costs.

Ayogan says he is mindful that the systems must be economical because the nuclear energy industry is being challenged by the natural gas industry due to falling prices of gas.

He believes one way to make the system simpler is to have just one coolant loop to cool the reactor core instead of the current system of a series of loops that, in turn, cool one another. This would reduce the number of components. “I am also eliminating an active pump, because if we don’t have electricity, we can’t use it,” he says. “My designs don’t use active systems; they are pure passive systems so if there is an accident, the reactor cools down using gravity. This is critical.”

Another important aspect is that his concept is a system that can cool down the reactor indefinitely rather than limited to the 72 hours previously thought adequate.

His designs are in the concept stage that show his ideas can work. Once patents are registered, the project would be picked up by industry for development and validation. It’s typically anywhere from five years to 20 years from concept to market, he says, depending in part of whether the designs will be used at an existing plant or a new one.

For Further Discussion
Safety systems are a critical topic after the Fukushima Dai-ichi accident.Dr. Fatih Aydogan, University of Idaho and Center for Advanced Energy Studies