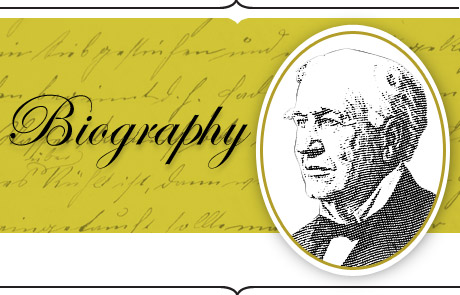 System of Electric Lighting, Commutator for Dynamo-Electric Machines, Arc Lamp, Electric Signaling Apparatus, Fuse-Block, Telephone. And that's just patent numbers 438-301 to 438-306. A biography of Thomas Edison could easily fill its pages with lists. The 8,000-odd materials kept in his famous Menlo Park, NJ, lab, for instance (an attempt to "carry a stock of almost every conceivable material of every size")—would make a plump catalog. Edison holds more patents than any other American, even 80 years after his death.

Our lights, our grid, our phones, our recordings, and our electric chairs—we owe them all, perhaps, to a seemingly dense school teacher. Alexander Crawford thought Edison "addled" and unfit for school. Crawford's impressions may have had something to do with the fact that the boy, born in 1847, was somewhat hard of hearing (this deafness is sometimes given credit for Edison's ability to concentrate, undistracted by the noise of others). When Edison's mother learned of Crawford's opinion, she pulled the young boy out of school and schooled him herself.

After a look at Edison's first experiments Crawford could conceivably be forgiven for his remarks. As a boy, Edison thought he'd try hatching goose eggs himself, so he sat on them. Conjecturing that it was a bird's diet that gave it the ability to fly, the young Edison mashed up worms and fed them to a friend. By the age of 12, Edison had graduated to more dangerous experiments. A job selling snacks and papers on a train allowed him time to read and tinker. He convinced his boss to let him set up a lab in the baggage car, a privilege he enjoyed until an accident started a fire.

On the train, though, Edison witnessed, and soon learned the operation of, the telegraph. By 15 he was working night shifts as a telegrapher, and a passion for the technology would pulse through his life and lead to a large percentage of his 1,093 patents as well as the nicknames of his first two children: Dot and Dash. His knowledge of the workings of telegraph machinery led to his first patent, a voting machine that no one bought or used.

A more profitable invention came just three years later. A take on the ticker tape, Edison's Universal Stock Printer was bought by the Gold and stock Telegraph Company for $40,000. The money, close to half a million today, allowed him set up his own lab. He was not yet 25.

By 1876 he'd moved the lab, and his family, to the now famous location in Menlo Park. Soon he invented the microphone that would make the phone useful, and the cylindrical phonograph. His massive collection of materials came in handy when searching for a filament that would allow the light bulb to burn for thousands of hours.

Edison's genius inventions were equaled by the apparatus he would set up to support them. Finding the baked cotton filament that allowed a light bulb to glow for 13 hours was a triumph, to be sure. But the arguably greater feat was how he showed it to the world. Wiring houses, stores, and the train station, he wowed witnesses when, on New Year's eve of 1879, he threw a single switch and set the village aglow. The grid was born.

Similarly, though the kinetoscope was certainly an improved version of the photo-animation that preceded it, Edison popularized it by distributing his sneezes and strip teases.

Along the road, Edison also invented the electric meter, the talking doll, vacuum-packed foods, and an electric pen that could make copies of documents.

While these and more of his substantial inventions improved the lives of many, another invention of Edison's would have different applications. Having built the infrastructure to power his light bulbs with DC current, he waged a legal and publicity war to crush his AC-promoting competitors (developed by former employee Nikola Tesla). To prove the dangers of AC current he took to publicly electrocuting animals, most famously the man-killer Topsy (Edison's own clip of the pachycide is conveniently available on YouTube). The success of these electrocutions led to the invention of the electric chair, which Edison eventually convinced New York to adopt in place of hanging.

Edison's own death didn't occur until 1931. His final expression, arguably the last thing he made, was caught in the form of a death mask, now on display at the Thomas Edison Center at Menlo Park.

Wiring houses, stores, and the train station, he wowed the world when, on New Year's eve, he threw a single switch and set Menlo Park aglow. The grid was born.