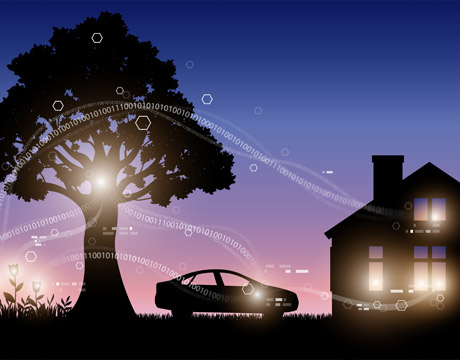 We’re not the only ones to live in a vast, interconnected world. Plants have long had complex and tangled communications with the environment and themselves, swapping pheromones, taking in one gas and excreting another, turning sunlight into leaves, etc. Unlike our own texting, Skyping, and cellular yammering, the back and forth of the world’s flora all happens without a single wire or silicon chip.

But now researchers at Sweden’s Linköping University have found a way to add conductivity to plants, turning them into organic electronics that may soon better serve the dominant mammal on the planet. “Imagine you have a plant, a rose, and you put it in a dye,” says Eleni Stavrinidou, a researcher at the university’s Laboratory of Organic Electronics. “Channels that transport water in the plant absorb the water with dye and the dye goes everywhere. After some time, the flower will become blue.”

Instead of a dye, Stavrinidou and her colleagues used a carefully tweaked polymer dissolved in water. Once it was sucked up inside the rose, the polymer became a hydrogel. “We believe this is happening because in the plant there are a lot of ions. They help the material to crosslink.” The conductive gel effectively became a 10-cm wire. She used it to create an electrochemical transistor and ultimately a logic gate.

Whether or not the hydrogel blocks the plant’s ability to transport water remains unknown. But to keep it alive, “We can selectively have some channels filled with hydrogel and some with water, minimizing invasiveness,” says Stavrinidou. “We could maybe even make some holes in particular places and supply the plant with material.”

The bulk of the research focused on creating the right polymer. “We tested a lot of materials,” says Stavrinidou. Much of the difficulty was balancing the amount of iron salts to achieve conductivity but not harm the plant. The conductivity of the resultant polymer is 0.1 siemens. They are now looking into increasing that conductivity and trying to find materials that will be absorbed further into the plant. In particular, they need to find a way to overcome cellular junctions.

The team also managed to get the leaves to display pixels. “They don’t emit light, it’s more like how a Kindle works. By applying voltage, you can switch these pixels on the leaf and change the color.”

Stavrinidou, a physicist and a nano engineer, had to do some absorbing of her own for this project. “The way we think is a bit different from how a biologist thinks,” she says. “I had to learn a lot about plants themselves. I didn’t know that the cells were not simple cells, they were hollow tubes. In the beginning, they arrive and then they die. You have this dead tissue helping the water to go through.”

So, what, exactly, does one do with wired vegetation? The absorbed electronics could act as sensors to monitor self-regulating systems in the plant. Then, potentially, delivery devices could release molecules to control the plant’s functions. The embedded wires could, for instance, dictate when a plant flowers. Flowers in space would go through their natural cycles at our beck and call. Or, forests could display, on their leaves, colors to indicate certain environmental changes. We could also harvest energy from wired plants. After they convert sunlight to sugars an embedded fuel cell could convert the sugar to electricity. Plants could even act as antennas, bringing Wi-Fi to the deepest, most remote, rainforests.

Needless to say, a broadcasting, energy-producing, programmed flora is not likely to blossom tomorrow. But the roots have been laid for the wired jungles of the future. “We are still in the beginning,” says Stavrinidou. “So let’s see.”

For Further Discussion
It’s more like how a Kindle works—by applying voltage you can switch these pixels on the leaf and change the color.Prof. Eleni Stavrinidou, Linköping University