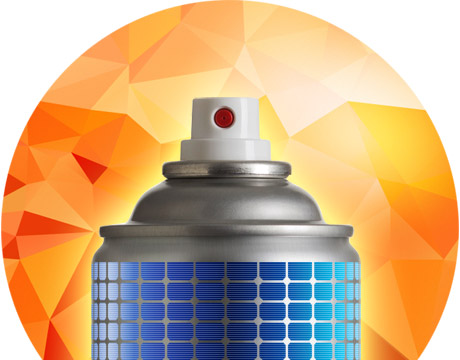 There are enough roofs, roads, and unused land in the U.S. to meet the electricity demands of the entire population with solar power. But we’re not likely to properly take advantage of all that surface area if we need to pave or tile it with high-cost, yard-wide, glass photovoltaic panels that are made a handful at a time.

Now if we could simply spray our solar cells onto every available surface, our power needs would be met in the time it takes to trigger a spray gun. Researchers at IBM and the University of Toronto have shown that just such a manufacturing method is possible using quantum dots.

Since the 1980s, these nanocrystals have been touted as the solution to everything. “When you work with materials like these, in the first paragraph of every academic paper you write, or press release you do, you always talk about the promise of solution-processed semiconductors, and how they offer this opportunity to make low-cost devices,” says Illian Kramer, an IBM researcher at the University of Toronto.

“You can make them large area, you can make them printable. Anything you can imagine doing with ink you can now do with a semiconductor. But then everyone goes and does research in the least manufacturing-friendly kind of way—usually something that’s very human-intensive and batch processed, like spin coating, or dip coating,” says Kramer. “So we said, let’s put our money where our mouth is and actually make a system which is kind of manufacturable. Spray coating seemed like a really logical first thing to try, so we walked over to the nearest art store and picked up an art store airbrush and it sort of evolved form there,” he adds.

Quantum dots are called “artificial atoms” because they come in tiny clusters of 100 to 1,000 atoms each and work as single units. To tweak his system to the point where it could deposit a monolayer of dots at a time onto a surface, he and his team needed to get the droplet size down to as small as possible. They tweaked several parameters to do so, including the boiling point of the solvents, the length of spray time, and nozzle size.

As the spray travels its 15 to 20 cm from nozzle to surface, the solvent evaporates and the concentration of quantum dots increases. “We realized that, as the droplets arrive at the surface of the substrate, they need to be almost dry, just a tiny bit wet, to make them stick,” says Kramer. The vapor pressure from the last bit of solvent before it evaporated would push them onto the surface. Pentane, heptane, and hexane left the droplets too dry—they would just bounce off. Octane, though, did the trick.

The nozzle that had the smallest mean droplet size was one used in the steel industry for cooling milling equipment. With the right solvent and nozzle, the layers of quantum dots make a glossy, glassy, brown finish.

That finish has an efficiency of around eight, a good deal less than the 15 to 20 of photovoltaic cells currently on the market, but a good deal up from the .01 percent of a year and a half ago. Kramer hopes to get that number up to 10 or 12 soon. At that efficiency the spray-on cells become competitive thanks to their potential for mass production.

“Solar panels are built on the model of the microelectronics industry, which was optimized to make one-square-millimeter microchips,” he says. “If you want to cover square miles, you need to find a way to make them just as good in a lot larger batches, and a lot more quickly.”

Kramer’s initial vision was of a couple of Ghostbuster types arriving at a home, and spraying the stuff right onto the roof. “That was always the picture I had in my mind that I used as motivation for this project,” he says. “Whether it ever becomes a reality is an unlikely question mark.”

A more likely setup would look something like a newspaper printing press, which, as Kramer points out, prints off miles of paper at a time, with a production floor that needn’t be excessively clean. “You’d have a giant drum with a roll of flexible substrate feeding another giant rum with a flexible substrate,” he says. “As the “newspaper” moves from one drum to the next, you are constantly spraying it to wind up with a finished device.” And the chemical processing could be done in a standard lab.

“From the perspective of installing it in your home, if you can go to your local hardware store and buy a roll of solar cells, the way you would buy a roll of wallpaper, and just spread it across your roof—that’s a much lower barrier to entry for residential solar.”

Learn more about the latest energy technologies at ASME's Power and Energy 2015.

For Further Discussion
We said, let’s put our money where our mouth is and actually make a system which is kind of manufacturable.Illian Kramer, an IBM researcher at the University of Toronto