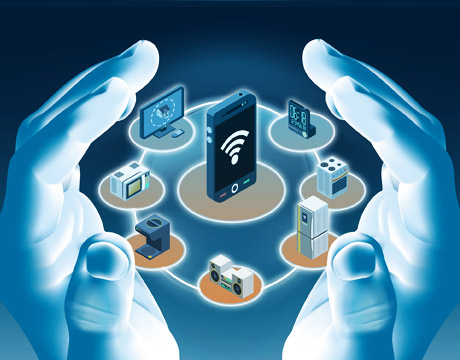 The Pursuit of a Smarter, More Secure IoT

For 34 years now, the Semiconductor Research Corporation (SRC) has helped shape and fund research into semiconductors. The nonprofit consortium is now poised to help smooth our transition to a greater Internet of Things. Here ASME.org speaks to SRC’s newly appointed president and chief executive, Ken Hansen,on how best to do that.

Q: What’s standing in the way of a full blossoming of the Internet of Things in coming years?

KH: There are several technical hurdles that are in front of us simultaneously. There’s no argument from anyone that Moore’s Law is slowing down and it will come to an end as we’ve thought about it in the past, which is by geometry. An atom is only a quarter of a nanometer in diameter. We are at the 14- or, Intel may say, the 10-nanometer node. You can’t build stuff one atom at a time, so there is a tremendous need now for research to figure out alternative ways to continue that progression of circuits or systems that will enjoy a cost reduction year after year; different ways than simply scaling transistors. The need for research is as great as it’s ever been in the industry.

Q: How does your organization go about determining which research gets assistance?

KH: SRC is a nonprofit company that is funded through memberships. Those membership dues are pooled together. The membership supports the identifying of industry problems by writing white papers. Those are sent out to about 11,000 professors across the world and they submit proposals of ideas they have to solve those problems.

Q: Where’s the IoT revolution most likely to hit first?

KH: One of the areas that will explode is in the biomedical space, in terms of sensors for glucose monitoring at the more obvious end but also a combination of sensors to identify the onset of a heart failure before it actually does happen so you can take action. We’re also building elements for sensors for labs on chips so you can measure chemistry and things like that in a simple quick way.

Q: What are the more immediate problems that need to be solved to see these and other advances?

KH: The two most important technical challenges are security and power consummation, and kind of the inverse of that is heat dissipation.

As we roll out this IoT network, which analysts have predicted will be 15 billion devices by the year 2020, all those points become access points for hackers. The security surface has gone from being large to extremely large. Without a robust secure system, it will only take a few hacks to have significant damage, to really slow down the consumption of the underlying components, because they won’t be trusted by the community at large.

Everything that we do today is limited by being power constraint. You build as much computational power into that thing as you can for the battery or energy source. Typically these things need to run for a 10-year period and you want to make them as intelligent as possible.

Q: What are some of the ideas you’re supporting to tackle that problem?

KH: From the compute side we’re looking at non-Von Neumann architectures. One of those is the neuromorphic approach that mimics the brain. The computational power you get out of the brain is eight orders of magnitude better that what we can do with a Von Neumann type of computer architecture today. That’s a whole heck of a lot of opportunity to be going go after.

There’s an area that we call SemiSynBio. It’s semiconductor synthetic biology. It’s really the intersection of biology and electronics, using actual biological elements to do some of the computational problem for you and outputting it in a way that electronics can read and understand. We know that those cells are very efficient in their use of power consumption. So if you can imagine somehow building a cell system that would be encapsulated like a semiconductor is, and that’s part of your computing network, then away you go. These are somewhat half-baked ideas, but they are directions that architecturally people are going.

Q: Are there similarly novel solutions for future IoT security?

KH: The research activities that we are funding run from the application level to software to the application programing interface, all the way into the embedded code and down to the hardware. The space that we are focused on is at the hardware level. And we are moving back to the embedded code: tightly coupled software with the hardware. One area we are looking at is being able to become attack aware. So, ok you have been attacked, your hardware detects that and shuts down immediately.

Q: Are we waiting for these things to be solved before IoT becomes massively more pervasive?

KH: IoT is not dependent upon any of these things happening. I’m speaking to roadblocks that lie ahead of us, that, if they are not solved, will limit us eventually, ten years or so down the road maybe. That’s the space we work in, further out.

For Further Discussion
Without a robust secure system, it will only take a few hacks to have significant damage, to really slow down the consumption of the underlying components, because they won’t be trusted by the community at large.Ken Hansen, president, SRC