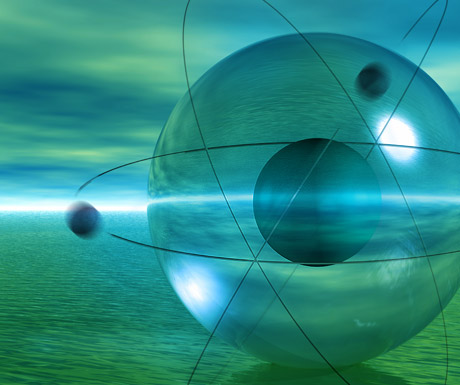 The Next Generation of Nuclear Reactors

The nuclear-power-generation future is quietly taking shape, at least virtually, through the labors of several hundred scientists and technicians working on the Next Generation Nuclear Plant (NGNP) projectat the Idaho National Laboratory (INL) in Idaho Falls, ID, and supported by Oak Ridge National Laboratory, Oak Ridge, TN. Scattered through several research facilities and operating sites, these experts are wrestling with dozens of questions—from technology evaluations to site licensing to spent fuels—that accompany any extension of nuclear power.

The High Temperature Gas-cooled Reactor (HTGR) being developed by the NGNP project is far more than an extension: it is a radical step forward for nuclear power. It will be the first truly new reactor design to go into commercial service in the U.S. in decades; it is to be up and running by the mid 2020s, depending on the available investment. The way forward may not be smooth. Cost estimates are in the rangeof $4 billion; who pays for what remains unsettled. Nevertheless, barring a technical crunch, a licensing snag, or a financial meltdown, the HTGR being developed by the NGNP project for DOE could become a cornerstone of an energy future with abundant electricity, process heat,and drastically reduced carbon emissions.

The HTGR initiative is for a graphite-moderated and helium-cooled design backed by considerable engineering development in Japan, China, Russia, South Africa, andby the U.S. The primary goal of the project is to enable HTGR licensing and commercialization. Experts put the potential market at several hundred reactors if most coal-fired power plants are replaced.

A consortium of national and international companies have formed the NGNP Industry Alliance, which hopes to partner with the government to develop and deploy the HTGR technology. Members include many of power-generation’s biggest names: Areva NP; Babcock & Wilcox; Westinghouse Electric Co.; SGL Group, a German producer of graphite and carbon products; and Entergy Nuclear. Entergy owns, operates, or manages 12 of the 104 power-gen reactors in the U.S. and is expected to handle licensing. These firms’ operations and expertise span the industry.

The high-temperature reference is to the reactor’s outlet temperature, about750-925 °C, or very roughly three times higher than most of today’s reactors. That means HTGRs can be a source of low-carbon, high-temperature process heat for petroleum refining, biofuels production, the production of fertilizer and chemical feedstocks, and reprocessing coal into other fuels, among other uses. This is why the NGNP Alliance includes Dow Chemical, Eastman Chemical, ConocoPhillips, Potash Corp., and the Petroleum Technology Alliance of Canada. All are potential customers for NGNP’s clean heat and electricity.

TheHTGR is an integral part of the Generation IV International Forum (GIF). Founded in 2000, GIF is a broadly based international effort to put nuclear power to widespread use for base-load electricity generation and low-cost heat for industrial processes. The other five Generation IV designs are molten-salt reactors, sodium-cooled fast, supercritical water-cooled, gas-cooled fast, and lead-cooled fast. (“Fast” refers to a portion of the neutron spectrum.)

Improvements to existing reactors of 2000 and later are classed as Generation III reactors. They have:

There is also a Gen III-plus group of about a dozen reactor designs in advanced planning stages. Today’s operating units, mostly built since 1970, are second generation. The first generation was 1950-1970 prototypes and demonstration units.

Despite optimistic long-term prospects forthe HTGRand Gen-IV, the nuclear industry’s critics raise two objections. First, safety risks may be greater initially with new reactor types as reactor operators will have had little experience with the new design. However, one of the features of the HTGR is that it is designed to be passively safe. Said another way, it requires little or no operator actions to get to a safe state, leaving hours and days to initiate any follow-up actions. Second, fabrication, construction, and maintenance of new reactors can be expected to have a steep learning curve. Advanced technologies always carry a higher risk of accidents and mistakes than predecessors. Established technologies grow safer with accumulated experience and lessons-learned.

The NGNP project envisions dozens of these reactors by 2050.In contrast to today’s power-generation reactors and their enormous concrete-and-steel containment structures, these reactors may be nearly invisible.They will be underground in concrete silos 150 feet deep.

Meanwhile, ASME is playing a major role in NGNP research on metal alloys that can withstand the reactors’ extremely high outlet temperatures.The alloys under consideration are 800H (iron-nickel-chromium), Grade 91 steel (chromium–molybdenum) and Haynes International’s Hastelloy XR (nickel-chromium-iron-molybdenum and N 617).The work is being carried out by ASME Standards Technology LLC under an agreement with the U.S. Department of Energy.

Jack Thornton is an independent writer.

Experts put the potential market at several hundred reactors if most coal-fired power plants are replaced.