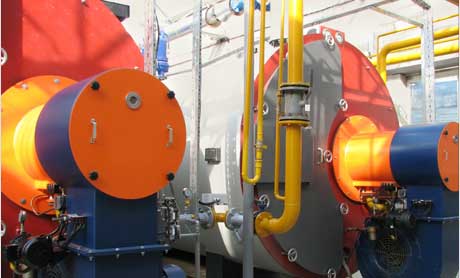 The History of ASME's Boiler and Pressure Vessel Code

The ASME Boiler and Pressure Vessel Code (B&PVC), which is scheduled to be updated in the coming months, is a Standard written to provide rules for the design, fabrication and inspection of boilers and pressure vessels. The mission of the B&PVC is to provide protection of life and property while assuring a long, useful service life to a pressure component designed and fabricated under the auspices of this Standard. The B&PVC is written by volunteers who are nominated for seats on its various Committees based on their expertise and their potential for making sound contributions to the writing, revising, interpreting and administering of the document.

The ASME Boiler and Pressure Vessel Code (B&PVC) was conceived in 1911 out of a need to protect the safety of the public. This need became apparent shortly after the conception of the steam engine in the late 18th century. In the 19th century there were literally thousands of boiler explosions in the United States and Europe, some of which resulted in many deaths. The consequences of these failures were locally focused and, other than one or two, received minimal national or international attention. Undoubtedly, one of the most important failures that proved the need for Boiler Laws was the boiler explosion that occurred at the Grover Shoe Factory in Brockton, Massachusetts on March 10, 1905. That incident resulted in 58 deaths and 117 injuries and completely leveled the factory. This catastrophe brought attention to the need to protect the public against such accidents with pressure-retaining equipment.

The first Boiler and Pressure Vessel Code (1914 Edition) was published in 1915; it consisted of one book of 114 pages, each of which measured 5 inches by 8 inches. Today there are 28 books, including 12 books dedicated to the Construction and Inspection of Nuclear Power Plant Components and two Code Case books. The 28 books are either Standards that provide the rules for fabricating a component or they are support documents such as Materials (Section II, Parts A through D), Non-Destructive Examination (Section V) and Welding (Section IX). Code Cases provide rules that permit the use of materials and alternative methods of construction that are not covered by existing B&PVC rules. The 2001 Edition of the Boiler and Pressure Vessel Code was over 16,000 pages, each of which measures 8-1/2 inches by 11 inches.

The B&PVC is the largest Standard, both in physical size (number of volumes and pages) as well as in the number of volunteers who participate in its preparation, issued by ASME Codes and Standards. At any one time there are over 800 active volunteers, many of whom serve on more than one committee. The fact that the B&PVC is a Committee organized and administered by the American Society of Mechanical Engineers may leave the impression that the volunteers are all Mechanical Engineers. However, due to the nature of the B&PVC, it is necessary that the volunteers represent expertise in many areas. To write such a standard requires a breadth of knowledge that is not available in any one discipline. There are members on the various committees who are educated and experienced in materials (metallurgical and materials engineering), structures (civil engineering), physics, chemistry (chemistry and chemical engineering) and many other disciplines in addition to mechanical engineering.

Currently, all provinces of Canada and 49 of the 50 United States have adopted, by law, various Sections of the Boiler and Pressure Vessel Code. Furthermore, the B&PVC is international. Over 25 percent of the companies accredited by the ASME Codes and Standards to manufacture pressure parts in accordance with various Sections of the B&PVC are located outside of the United States and Canada.

The ASME Boiler and Pressure Vessel Code (B&PVC) was conceived in 1911 out of need; that need has been satisfied. The safety record of pressure-containing components manufactured in accordance with the rules of the B&PVC is outstanding; its historical record is testimonial to the unselfish contributions made by the tens of thousands of volunteers who have participated in its preparation over these past 90 years.

The ASME Boiler and Pressure Vessel Code (B&PVC) was conceived in 1911 out of a need to protect the safety of the public.