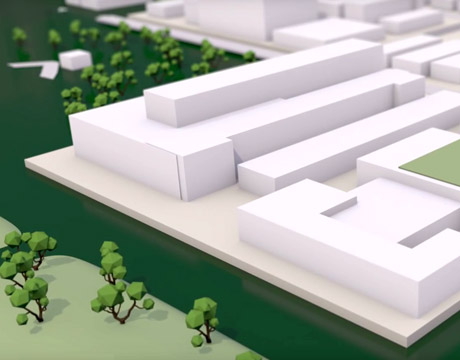 A floating city could rise with the floodwaters rather than be flooded. Image: ArxPax

Many scientists believe that climate change is making flooding more frequent and severe. Over the last 36 years, 26 flooding events in the U.S. have totaled over $110 billion in damages.

The National Oceanic and Atmospheric Administration recently noted that sea levels are rising along parts of the Florida coast by more than a third of an inch every year—a rate of one foot every 36 years. Others scientists estimate that sea levels could rise by six feet or more by 2100, flooding coastal communities around the world.

Many government/municipal responses to flooding are predictably reactive: retreat, return, and rebuild, only to await the next flooding disaster, perhaps protected with added infrastructure, such as dikes or retractable barriers.

But what if a community could ride out a flood with ease, and not suffer any damage from the event? Architect Greg Henderson is convinced this is possible, especially if the community is already floating.

Henderson is founder Arx Pax, a California-based firm that develops resilient construction technologies. Inspired by the state of Washington’s Route 520 floating bridge, Henderson designed an innovative building system that floats on precast concrete pontoons in just a few feet of water. The SAFE Foundation system can support homes, taller commercial buildings, and roads that cover an area of several city blocks, or larger. The community simply rises on top of floodwaters and returns to normal ground level, intact and unharmed, when the waters recede.

“Depending on natural fluctuations of the water table, the rate of inflow from the sump can be adjusted accordingly to maintain the correct depth,” says Henderson.

Next, a floating concrete foundation slightly smaller than the containment vessel is built on top of the water. Precast concrete pontoons 8 feet x 10 feet x 20 feet in size are assembled into groups, locked together with bolts, and tensioned to make a broad, stable platform. The pontoons are made from low-permeability, 7,500-psiconcrete. The completed platform floats on the surface of the containment vessel.

The platform is kept in place with a system of cables anchored to the opposite sides of the containment vessel. The cables keep the platform in the same x-y or horizontal position. However, there is enough slack in the cable to allow for vertical rise and fall of the platform.

“For example, a 230-foot long cable will allow a 10-foot rise and fall,” says Henderson. “A five-foot extension in anchor cable length can accommodate about 40 feet vertical displacement in an extreme flood event.”

Residential and mixed-use commercial buildings, complete with roads, landscaping, and utilities, are then built on the platform. For added security, the superstructure is designed to use anchor bolts and hold-downs on the platform. These share the same structural grid to allow for ease of construction and the use of prefabricated buildings.

If a flood occurs, the community simply rises. If an earthquake strikes, because the floating community is decoupled from the earth, the buildings are unaffected by the violent shaking of the earth below. Seismic fuses provide five-foot extensions to the cables to allow for lateral movement of the containment vessel around the construction platform during an earthquake.

Right now Henderson’s first pilot project—a 1.5-acre mixed-use design—will get started in a flood plain area in the San Francisco Bay area in about one year, followed by a two-year construction period. Meanwhile, he has begun outreach with the Federal Emergency Management Agency (FEMA) and other organizations and communities to change their reactive “rebuild and retreat” mindset. He is also considering a pilot project withthe Republic of Kiribati, a small island nation in the Pacific Ocean that floods every year.

“We’re helping developers, architects, aid organizations, and governments rethink how they can build, rather than just react, to disasters,” says Henderson. “We are looking for strategic partners around the world who share our vision so we can value engineer this system and get it out into the world for the people who need it.”

For Further Discussion
We’re helping developers, architects, aid organizations, and governments rethink how they can build, rather than just react, to disasters.Greg Henderson, ArxPax