Who Are the Engineers of the Future?

Who Are the Engineers of the Future? 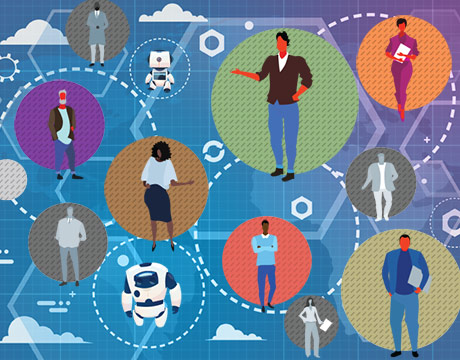 I began my career as a mechanical engineer at Pratt & Whitney 40 years ago, when our primary tools were of the analog variety: slide rules, actual spreadsheets and pencils. Lots of pencils. We were the “computers”—computing effects of the smallest design change to ensure there were no unintended consequences. It would take us days to get through a single permutation.

In today’s digital age, pencil drawings have evolved to 3D CAD renderings and slide rules have been replaced by algorithms that can perform complex calculations in seconds. What took a team of highly educated engineers days to do when I started my career is now a mere digital task requiring less time than it takes to read this paragraph.

It’s tempting to think of automation and digitization as simply redirecting work from human to machine, but it’s not that simple. The work itself changes, and the skills you look for in people change, too.

Ten years ago, I would have said our biggest talent need was mechanical engineers— aerodynamic, thermal, structural. We still need mechanical engineers, but more than ever, in a world of increasingly complex and integratedproblems, it’s no longer enough to be a"structures" engineer or a“design” engineer. We need adaptable engineers who speak a common language and solve issues for the entire system, blurring functional lines and titles. And they need to be completely integrated with the producers that manufacture the parts within these systems and better understand advanced manufacturing methods.Design and manufacturing engineers must cross functional lines to assure that the designs we produce can be delivered at rate, cost and quality.

This is also a big driver of our cultural transformation. We are driving decision-making to the person most immediately responsible, and placing more value on a collaborative, team-based approach to issues and opportunities. Risk-based decision making is also encouraged, and mistakes are seen as an opportunity for learning, not punishment. Without risk, we can’t reap the rewards we need to stay competitive in this changing landscape.

Today’s jet engines produce data as much as propulsion; the role data scientists play in engine design, manufacture and maintenance will only continue to grow.

On the shop floor, this could lead to the end of the traditional machinist role. Instead of running a machine, floor jobs in the future will manage multiple computers that run machines, and self-learn. We already have this capability, and it will continue to expand. We still need human intervention—less of it, though, and the ability to troubleshoot software or repair robots.

The industry will need more people that can design and manage artificial intelligence, and data regression analysis. Advanced manufacturing and aerospace won’t be alone in this search for talent. We will be competing, for the first time, with industries such as medicine, Silicon Valley, and entertainment, for this particular skill set and the data scientists of the future.

We have a very powerful motivator to think deeply about the changing role of engineers and technicians in aerospace. We have already hired roughly a third of the 25,000 people we expect we will need by 2026 to backfill retirements and to meet the industrial ramp of our most popular programs. Globally, more than 2,000 of those hires have been engineers. We will meet and exceed an industrial production last seen in World War II, and the demands of the business to be more productive will never cease.

While possessing the right technical skills will always be important, I think leadership skills like creating a learning culture, coaching and mentoring, communication and diversity of thought are increasingly important in our global industry. At Pratt & Whitney, we are investing heavily in our executive and middle management populations to ensure they have the right leadership skills to continue driving momentum around our cultural transformation. As a leader, my job is to help each one of my employees reach their fullest potential and hopefully be happy to come to work every day because what we do matters.

I have nothing but optimism for our future – not just Pratt & Whitney’s future, but engineering’s future. In the aerospace industry, change is the only thing that remains constant. The new talent I see today gets it. They bring diversity in experience, education and outlook, and they change the conversation: They make it better. The more seasoned professionals that join our team also get it. They don’t want to be stuck in a silo, they want to see the whole picture in order to solve their part of it.