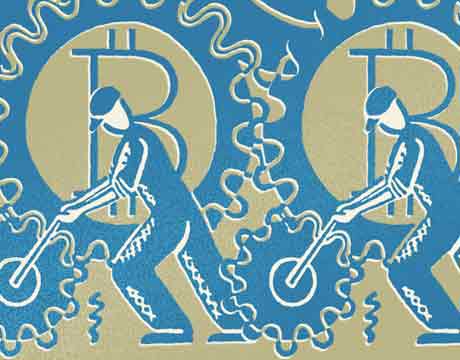 Manufacturers can be resistant to change, but as a chief technology officer at Moog, George Small is charged with staying ahead of the technology curve. Small’s latest obsession is blockchain, the underlying technology behind the cryptocurrency Bitcoin, which he believes will change the face of manufacturing.

The goal wasn’t to find a new way to pay for manufactured goods, but to track them through the supply chain.

More than two years ago, Small began researching blockchain’s benefits as a more effective way to digitize and decentralize manufacturing. Blockchain involves a digital ledger that is continually updated to record and track transactions, accounting and asset movement. In the context of manufacturing, blockchain can establish an organized digital thread tracking the history of a part from its digital design to production all the way to end of life. A blockchain can be shared with multiple parties that get access to the same information.

“All these paper processes that are being replaced will ultimately be digital and expand across enterprises,” Small said. “You can be tracking and tracing these individual operations at the shop floor, and instead of doing it in your ERP system, it could be recorded on a ledger you share across organizations, which is hard to do right now.”

With Small’s help, Moog became one of the first manufacturing firms to unlock blockchain’s promise. The company began a pilot project to replace insecure paper processes with an end-to-end digital paper trail to securely share digital designs with multiple manufacturers and designers. That’s a critical need for Moog, which designs and manufactures parts for such highly regulated products as aircraft, satellites, and medical devices.

Other manufacturers are also investigating the promise of blockchain technology to streamline their operations. They are discovering that blockchain could enable deal-making and provide a means for establishing trust between two companies on opposite sides of the globe.

Most people associate blockchain with Bitcoin, but it is simply a file system that can operate without a centralized mechanism for establishing that the receiver can trust the authenticity of the file. Authentication is performed by a chain of computers using cryptographic and computing techniques, and only after that authentication is the transfer completed.

The documents themselves can be anything: Land titles, medical records, digital design files, or receipts. Or, many different kinds of files can be bundled together. The key is, once the data is recorded in a block, it can’t be altered without the agreement of all the computers in the network. Instead, new information is tacked on to the end of chain. In this way, the entire history of the document can be traced.

For manufacturers, blockchains can contain product specifications and designs, contracts between suppliers, and the terms of payment upon receipt of the finished product.

“The blockchain technology could potentially change the way how 3-D printing or manufacturing processes are structured,” said Philipp Sandner, head of the Frankfurt School Blockchain Center in Germany. It might also reduce counterfeiting and manufacturing fraud.

Research firm IDC is projecting blockchain expenditure on manufacturing and resources in 2018 to be about $448 million, third only to financial services and distribution and services. That number will explode as more blockchain projects come out of experimental phase.

In its pilot blockchain project, Moog worked with ST Aerospace on secure 3-D printing of airline parts. ST Aerospace purchased a digital design directly from Moog, which was recorded in a ledger. Based on parameters specified in the blockchain, ST Aerospace could verify the design file as a genuine Moog part and identify the right materials and printing techniques it should use. The company could then immediately print the part on a 3-D printer in its Singapore facilities using the laser metal process. The design files pulled from Moog’s database were protected by digital rights management and could not be tampered within the process of establishing a contract and delivering the file from the U.S.

The next stage demonstrated the possibility of settling the transaction via a smart contract, using a digital token in the place of hard currency. Since this was a pilot, no actual money was exchanged.

From Moog’s perspective, the digitization and distribution of the manufacturing process can help the company save on transportation and warehousing costs, while getting parts to customers almost immediately.

Distributed manufacturing like this has been possible for some time thanks to the availability of additive manufacturing. But for parts used in the aerospace industry, it would not have saved much time. The Federal Aviation Administration and the European Aviation Safety Agency both require parts provenance today, which happens mostly on paper. Before a part could be printed, the paperwork would have to be put together, a process that could take days. Blockchain and additive manufacturing could synchronize those processes to meet regulatory requirements when shipping a design file for a part.

The idea that a digital file could follow a physical item around like a shadow opens up some intriguing possibilities. To test one of those possibilities, a consortium of manufacturers and information technology companies called the Genesis of Things initiated an experiment.

The experiment, run by Carsten Stöcker, CEO of Berlin-based Spherity, used a blockchain system to print 100 cufflinks using files ordered from a secure database, and delivered to specific 3-D printers in a farm in Germany that matched the parameters specified in the transaction.

Before printing the cufflinks, the geometry, material, and structure were set as custom design parameters in the form of asset metadata in the print file. These parameters—which included printers capable of making titanium products, meeting specified laser angles, and other details—were contributed by trusted parties, and the transaction was validated by multiple computing nodes in the blockchain. The parts were printed by securely linking up the individual encrypted digital files with authorized 3-D printers with right materials and printing techniques.

Each cufflink had a unique print that could not be cloned in a 2-D process, and the packaging had QR codes linked to product details such as design elements and materials used. Jointly, the goal was to minimize the risk of counterfeiting the product. The cufflink designs could be modified as the design files weren’t digitally rights managed, so parameters like assets, materials and 3-D printing techniques could be added to print files.

The integrity of an execution environment was important, especially in manufacturing, where “no one trusts each other,” said Stöcker. “We recorded quality assurance parameters in digital twins of the cufflinks to establish supply chain transparency that added to the provenance.”

Since each cufflink printed was linked to a specific blockchain that followed it around, once that cufflink was sold, its designer could be looked up and automatically paid a royalty.

On a larger scale, blockchain provides a blueprint for manufacturing companies to establish unified exchanges with common ledgers to share designs and settle deals directly, much like how Bitcoin enables people to freely exchange currency across borders. These networks could enable deal-making on a global level, and is especially relevant for designers and manufacturers looking for a more direct way to connect to customers.

“Right now the idea is that everybody’s got their own database,” Small said. “Blockchain in the end is one way to have a common database that no entity owns. You can start connecting organizations in ways you could not before.”

Other groups are looking at blockchain files as a means of enabling machine shops to bid for jobs to make precision parts for companies anywhere in the world. Jeremy Goodwin, CEO of SyncFab, a distributed manufacturing company in San Leandro, Calif., hit on the idea after seeing factories in the San Francisco Bay area struggling financially, and figured blockchain could be a better, quicker, and cheaper way to bring those factories more business.

SyncFab’s procurement and manufacturing exchange enable machine shops to bid for jobs. A designer first establishes a request-for-quotation and provides the design assets, indicates the processes required, such as general dimensions, materials, volume, and turnaround time. The designer also offers incentives that could create additional income for the shops if they take on tasks such as troubleshooting or PLM documentation off the hands of designers. The entire system—bidding, tracking, asset management, and payment process—is managed via a private blockchain.

“There’s a lot of older veterans, they hear blockchain, think it is Bitcoin and say ‘it’s a fraud,’ ” said Goodwin, who is also an industry partner to the U.S. Department of Energy’s Clean Energy Smart Manufacturing Innovation Initiative. “What if you tell them you’re going to earn a comparable income stream? It is a built-in incentive component that’s powerful in addition to the technology itself.”

Getting the income is not as straightforward as old-fashioned invoicing, however. Payments due as part of the “smart contracts” embedded in the blockchain agreement can be made via cryptocurrency, for instance, or a fledgling Internet-of-Things based machine-to-machine payment protocol. But established businesses are still subject to international financial and tax laws even if they do accept a cryptocurrency, and alternative payment methods are full replacements for hard cash.

Other projects are underway on paper or at least close to implementation. IBM, which sells blockchain software and services, is working with automakers on a project to verify timestamped IoT data to ensure the right parts are used when assembling a car. In that application, the blockchain acts as a database to track parts and plays a role in speeding up automation. The system could also help repair shops verify parts when fixing a car.

The U.S. Department of Defense has seen a growing number of counterfeit parts used in fighter jets and other equipment, and the National Institute of Standards and Technology is building a blockchain so that the DoD can pinpoint parts to the source manufacturer by tracking back over multiple levels of suppliers. Blockchain could also help the U.S. Navy do just-in-time 3-D printing of parts on ships at sea, and also establish a superior tendering process, said Sylvere Krima of the systems engineering group at NIST.

Krima was also quick to point that blockchain is not security software, nor is it bulletproof. A private blockchain could be vulnerable to hackers. NIST conducted a blockchain study that found that there’s no “code of conduct” to enforce user behavior, so that malicious parties could disrupt transaction flow. But there’s also a good chance that irregularities would be ferreted out in the blockchain verification and authorization process.

Another challenge to wider implementation is the energy required to mine public blockchains.

“You can implement a private blockchain where you don’t need as much mining power. It’s a lot less energy, you can arrange it to any existing IT infrastructure,” Krima said. “That’s a use benefit as you don’t need huge servers or network bandwidth.”

For now, blockchain is a technology that is attractive to manufacturers looking to solve a problem, not those happy with existing processes. But it’s expected that as artificial intelligence and the Internet of Things grow in importance—especially with the wider availability of cheap, ubiquitous computing—blockchain applications will become relevant to even the most stodgy manufacturers.

“Blockchain is a tool that can simplify things,” said Moog’s Small. “As you dig more and more into it, it’s a very digital intensive process and it lends itself to rethinking how the manufacturing value chain is laid out.”