The Banjo: The Engineer’s Instrument

The Banjo: The Engineer’s Instrument 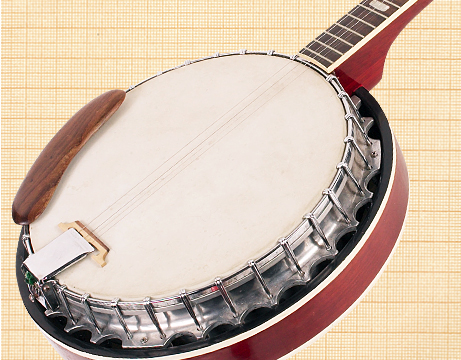 Steve Martin plays one. So does Winston Marshall from the group “Mumford and Sons,” and even Taylor Swift, kind of (it’s a six-string). And yet, however much polish this recent uptick in popularity has lent the banjo, it’s not yet shed its reputation as a hillbilly instrument that belongs in the hands of an old-time farmer rather than a rock star. Never mind the fact that all the early bluegrass banjo players wore suits and ties on stage. (The image persists, thanks, largely, to a five-minute scene in the movie Deliverance, reviled by banjoists everywhere.)

The truth is somewhere on the other end of the backward/advanced spectrum. In fact, a strikingly large percentage of bluegrass banjo players are engineers, tinkerers, mathematicians, and programmers.

Noam Pikelny, whose instrumental banjo album was recently nominated for a Grammy, studied engineering at the University of Illinois. Ben Eldridge, of the once hugely popular bluegrass band “Seldom Scene,” develops signal-processing algorithms for the Navy’s underwater acoustics programs today. Tony Ellis, who played with Bill Monroe, studied engineering between musical pursuits. Lamar Grier, also a “Blue Grass Boy” for Monroe, went on to work for IBM for 17 years.

And that’s just to name the famous ones. “I will say that the number of engineers I have run into playing banjo is statistically significant,” says Stan Moore, an electrical and computer engineer and an accomplished banjo player for some 35 years.

The bluegrass banjo is not as straightforward as other instruments. With a piano, a trumpet, or even a saw and a bow, if you need to play a note of a melody, you play the note of the melody. With the banjo it’s not so simple. This has something to do with the fact that eliciting the traditional sound requires three fingers playing five strings with four beats to a measure. To get the ring and drive associated with the banjo, each consecutive note is played on a different string. (On other stringed instruments, like the guitar or the fiddle, it’s common for several consecutive notes to be played on the same string.) This means that melody notes are not always where you want them. It takes a certain kind of problem-solving to learn how to work melody notes into that string-changing ringing sound.

“It’s sort of an engineering mindset or logical mindset. I don’t know what you call it, but it’s the kind of stuff I’m into,” says Bill Keith. Keith is one of bluegrass banjo’s most influential players thanks to the melodic style he developed. In short, he figured out how to play melodies and scales with higher notes being played on lower strings—a counterintuitive concept to string players of any genre. He was also a Blue Grass Boy in 1963.

Keith was a dissector of more than music. When he was 15 he bought his first car, a Model A Ford. “I took the car completely apart,” he says. “The body was off the frame, the engine was out. I did all the frame restoration, the brakes, replaced the rings and the engine and did a valve job the old fashioned way.” Later he acquired a 1910 single cylinder Brush. He needed help with the engine and wound up making the acquaintance of a machinist. “A real antique guy. Old equipment, overhead shafting, big fat leather belts. The whole shop ran on DC using drain oil to power a Hercules diesel.”

A lot of important stuff for the banjo happened there. After examining the planetary transmission found in a model T as well as his Brush, he thought of using a similar idea for tuning pegs. With his friend Dan Bump, he engineered a tuning peg that would allow players to bend notes lower, to a specific, predetermined pitch (listen to the first notes of “Flint Hill Special” and you’ll understand). These pegs—known as Keith tuners—became the industry standard. They also represent a sizable portion of Keith’s income.

“When I was trying to learn Earl Scruggs’ stuff I basically had to take it apart to see what he was doing. That was fairly analytical, sort of reverse engineering. I had the product and I had to figure out what it was made of.”

Though Keith recognized the connection between the analytical and the musical, other engineers claim that the primary attraction is the hardware itself. “I chose the banjo because given the tools available to me, I could make the most parts for one, of any stringed instrument that I could think of,” says one mechanical engineering graduate student.

“Music is what engineers hear in their heads when they finally connect the dots to some problem,” says Marc Smith, a senior engineer for a defense contractor. “You’ll find many, many musically inclined engineers. I’ve found that the more artsy they are, the more they gravitate towards guitars and keyboards. The more mechanical and ‘hands on’ they are, the more they’re likely to pick the banjo.” Smith “grew up working underneath cars and listening to Tchaikovsky, Texas swing, WWII era swing, Country and Ragtime.” He took to engineering “like a baby duck to water.” He’s been playing banjo since 1979 and is a master of “Classic” and “Minstrel” styles as well as bluegrass banjo.

“For me, the banjo represents a tinkerer’s dream. Endless hours may be spent on just getting all the components to hang together efficiently,” says Smith.

Unlike a guitar, or a cello—or a piccolo—for that matter, a banjo can be completely disassembled and put back together in a matter of hours. Every part of a banjo can be swapped out and tweaked. There’s a drumhead sitting on a metal tone ring resting on a wooden rim. Behind it all is a resonator to bounce the sound away from the player’s body. It’s all held together by brackets and just waiting for adjustment and improvement. And that’s ignoring the neck, the bridge, the tailpiece, and more.

“More patents have been granted on banjos, their parts, and pieces than almost any other single item . . . ever,” says Smith.

“When it comes to taking a banjo apart, putting back together, the physics of the banjo sound, the angles of attack etc, I very much go into engineering mode,” says Andrew Cartoun, an engineering consultant for high rise buildings in New York. Cartoun received his degree in mechanical engineering from Vanderbilt, a school he picked because of its location in Nashville, TN. “The engineering had more to do with the actual instrument, setup, than the act of playing music.” He admits, though, that there may be “subliminal” problem-solving that goes on while playing.

Of course, for many a banjo-playing engineer, the mechanics of the instrument, the peculiar difficulties of playing it, even the precision and intricacies of the sound, have little to do with why they picked it up in the first place—it was just the music. “The banjo is a weird and joyous instrument,” says Smith. “It begs to be improved and yet resists improvements in every direction. It is frustrating and mind-numbing, exhilarating and relaxing. It attracts young and old, rich and poor, tinker, tailor, soldier, sailor, whites, blacks, Asians, Martians . . . and engineers.”

You’ll find many, many musically inclined engineers. The more mechanical and ‘hands on’ they are, the more they’re likely to pick the banjo.Marc Smith, a senior engineer for a defense contractor