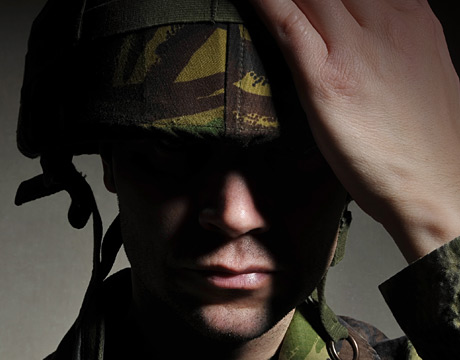 Taking Trauma Out of the Brain

The hell of the battlefield can make hell in the life of the solider, long after he’s put down his gun. About 15 percent of U.S. soldiers returning from recent wars have been diagnosed with posttraumatic stress disorder. Why one solider suffers from the disorder while others do not may never be known, but now researchersat Tel-Aviv University have found a way to train soldiers to significantly reduce the chance of being affected by PTSD.

In less than extreme situations, fear is healthy. And fear is learned. Put a person in a situation that once proved dangerous and they’ll likely feel a surge of fear. But when events go beyond dangerous and into the realm of trauma, the subsequent learned fear can become debilitating. Just how fear and posttraumatic stress disorder become debilitating is not well understood. But one thing is well known: During the experience of fear, the amygdalae (two small parts at the end of the hippocampus, deep in the brain) become quite active.

“The amygdala is a brain structure that serves as a kind of alarm bell in our brain,” says Jackob Nimrod Keynan, a researcher in cognitive neuroscience at the Sagol Center for Brain Functions in the Tel-Aviv Sourasky Medical Center, “And the problem starts when this alarm bell goes out of control. We all need to recognize danger, but if you’re at home and you hear the alarm, and if you can't turn off the alarm, you can't do anything.”

Research from 2009 showed that Israeli soldiers with more active amygdalae before a traumatic exposure were far more likely to have PTSD after. Talma Hendler, director of the center, began wondering if there was a way soldiers could turn down that activity, before seeing combat, to avoid a potentially debilitating long-term aftermath.

The answer was biofeedback.

Keynan, Hendler, and their colleagues testedvolunteers using an fMRI machine and asked them try to find ways to lower the activity in their amygdalae. A simple thermometer-like bar told them whether the activity was increasing or decreasing. “We did not suggest strategies,” says Keynan. “We told people to find their own way. We found that it works well: different people find different strategies. Perhaps there is an instruction that would better, but the part where you try different things is perhaps as important as finding things. The experimentation is very important—that's the theory.”

However effective, it’s not likely that fMIR machines will ever be rolled out to the barracks before a battle in the hopes of preventing PTSD. They’re too big, too noisy, too expensive. “It's like giving someone a medicine that costs a million dollars a pill,” says Keynan.

So the team turned to another brain imaging technique: EEG. It was everything that fMIR wasn’t: cheap, quiet, mobile, and easy to use. The only problem was it doesn’t show what’s going on inside the brain, but what’s going on at the scalp.

But maybe what was going on at the scalp might somehow reflect what was going on inside the skull. It was a long shot, but to find out,researchers needed to do both at the same time. That is, subjects would have to wear an EEG cap while they played the lower-the-thermometer/calm-the-amygdala game from inside an fMRI machine.

But the two techniques don’t get along. “Both imaging techniques interfere with each other. EEG interrupts magnetic homogeneity, and fMRI puts noise into the electric signals,” says Keynan.

So they turned to the team's biomedical engineer, Ilana Podlipsky-Klovatc, who came up with a system to make it all work. In short, she tweaked the EEG system to work in the fMRI, and found a way to remove the fMIR noise, which is systematic, from the EEG.

There was every chance there would be no recognizable pattern in the EEG to match with amygdalae activity as picked up by the fMRI. “Imagine how anxious I was before I hit enter,” says Keynan. Amazingly, a signature emerged. “This is not a direct measurement of amygdalae activity,” he says. “We don't claim to have recognized a signal coming from the amygdalae. It's a fingerprint.”

But it’s a fingerprint that proved to work with biofeedback. People who were able to calm the amygdalae with the EEG were subsequently able to do the same in the fMRI.

Keynan and his colleagues have been able to take the cheaper lighter biofeedback machine—just an EEG cap with a laptop—to bases and train soldiers to lower their stress vulnerability. The game they play now is a bit more sophisticated. Instead of trying to lower a bar, they watch an animated scene of a hospital waiting room, with angry shouting people around the front desk. As a soldier lowers the activity in his amygdalae, the people at the desk begin to sit down. Changing the chaotic scene turns out to be far more motivating than the old thermometer bar.

Keynan hopes to train 150 soldiers soon. Then, in a year or two, they’ll interview the soldiers to see how effective the biofeedback was in reducing PTSD.

For Further Discussion
Different people find different strategies. Perhaps there is an instruction that would be better, but the part where you try different things is perhaps as important as finding things.Jackob Keynan, Tel-Aviv Sourasky Medical Center