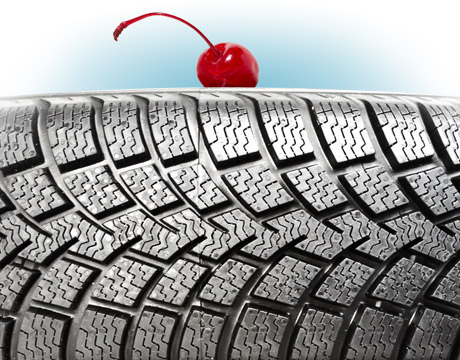 Your car runs on fossil fuels in more ways than one. Yes, you fill it up with gas to get you from here to there, but the tires on which the vehicle rolls are made predominantly from fossil fuels.

That team has come up with a way to make automobile tires from organic matter, including trees, grasses, and corn. The process just might shift the tire production industry toward the use of renewable resources, says Paul Dauenhauer, a University of Minnesota associate professor of chemical engineering and materials science.

“This research could have a big impact on the multi-billion dollar automobile tires industry,” says Dauenhauer, who led the research.

But it needn’t disrupt automotive producers and car drivers. The sustainably made tires would be able to fit existing and future automotive axles the same way current tires do. In other words, vehicle owners would still head to the tire store or automotive dealership to have new tires mounted.

In fact, drivers probably wouldn’t even notice between conventionally produced and so-called green tires. The biomass-produced car tires would be identical to existing car tires, with the same chemical makeup, color (they wouldn’t really be green), shape and performance expectations, Dauenhauer says.

The method could also have an effect on the way other rubber-based products are made. Perhaps they too could be more sustainably produced using the same or similar process, he adds.

The key to the whole tire-production process—whether biomass or traditionally produced—is isoprene, the key molecule in car tires. The researchers wanted to find a way to produce it from the natural products found in many people’s backyards.

For decades, tires companies have been looking for ways to produce isoprene from organic matter, Dauenhauer says.

Today, chemists make isoprene by breaking petroleum molecules via a thermally driven process known as “cracking.” The isoprene is then separated from the hundreds of other chemicals produced by cracking and purified.

Finally, chemical engineers cause the isoprene to react with itself. This results in the long chains that make up a solid polymer. That solid is the major component of car tires.

Researchers believed there had to be a better way. Interest in finding one has risen in tandem with the increase in environmental consciousness.

But most of those production efforts have been focused on fermentation, Dauenhauer says. That made sense, as Ethanol, a clean-energy-burning engine fuel and fuel additive, can be produced by the fermentation of sugars by yeasts. It can, for example, be produced from sugar cane.

But isoprene proved a difficult molecule to generate from the microbes that resulted from fermentation. And efforts to make it by processes that didn’t include fermentation haven’t succeeded, Dauenhauer says. Then, the Minnesota and Massachusetts researchers discovered a three-step process that combines biological fermentation with conventional catalytic refining—similar to the way petroleum is refined—can work to create isoprene, he adds.

In the second step, itaconic acid and hydrogen are combined to form a chemical called methyl-THF (tetrahydrofuran).

The third step is where the breakthrough occurs. In that step, methyl-THF is dehydrated to form isoprene. Using a catalyst recently discovered at the University of Minnesota, called P-SPP (Phosphorus Self-Pillared Pentasil), the team was able boost the reaction by up to 90 percent. Isoprene made up most of the resulting product.

S-PPP surprised researchers with its ability to dramatically boost catalytic efficiency, Dauenhauer says. They had expected positive results, but not the 90 percent boost.

Manufacturers could one day have that three-step process to thank for boosting U.S. tire production, says Frank Bates, a University of Minnesota professor of chemical engineering and materials science.