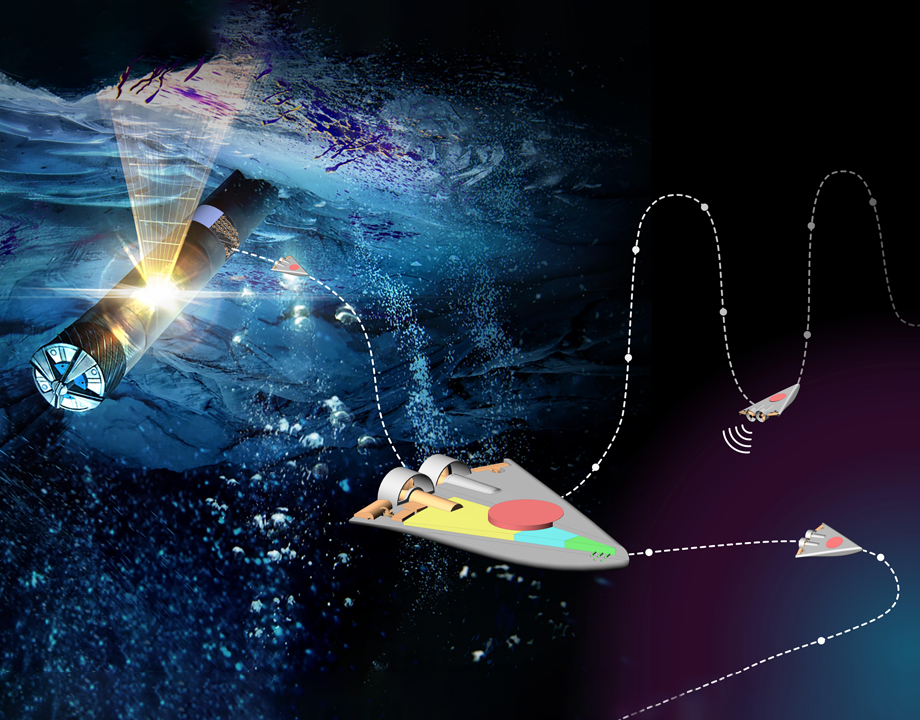 Jupiter’s moon may hold an ancient ocean. NASA engineers think small robots could be the key for its exploration. Image: NASA

Autonomous Technology Collection
Planetary scientists have their sights set on Jupiter’s moon Europa. It’s about the size of Earth’s moon, but is covered in a thick layer of ice, below which they believe to be an ancient alien ocean. Though there isn't a mission yet scheduled to land on Europa, a team of engineers and scientists at NASA’s Jet Propulsion Laboratory are developing the technology that could one day explore this icy moon.

“The really fascinating thing about Europa is that it has one of the youngest surfaces in the solar system,” said Samuel Howell, a research scientist at JPL. “And we believe that the chemistry coming from the surface might be meeting the chemistry in the ocean in a way that could support habitable environments for life.”

To address that, the SWIM (Sensing with Independent Micro-swimmers) team’s idea is to develop a swarm of dozens of miniature, untethered swimming robots, each with their own set of instruments, that are designed to collectively explore the ice-ocean interface, measure ocean properties, and search for signs of life.

“One of the biggest difficulties is understanding all of the information you would have to collect to say that you have positively detected a habitable environment,” Howell said. “So, you really want to bring the most capable scientific tool kit you can with you, and whether or not you find extant life, either case is a major scientific discovery.”

To complete this tool kit, the SWIM team will first need a way to access the ocean. Their plan is to use  a cryobot called PRIME (Probe using Radioisotopes for Icy Moons Exploration) that would be a critical part of the mission’s payload. PRIME, also in development by JPL, would weigh nearly 800 pounds, and use a radioisotope power system to melt through the ice. Once it reaches the ocean, PRIME would deploy SWIM’s fleet of small swimming robots.

Ethan Schaler, a robotics mechanical engineer at JPL who created the concept for SWIM, said Probe won’t have much room on board for the fleet, so the bots will have to be small. Their current prototype is a delta wing-shaped wedge about the size of a cell phone. They'll be able to fit about four dozen of them in Probe.

“Because the SWIM robots are so small, we can find interesting ways to pack them in a limited volume,” Schaler said. “There are going to be some control challenges, and we're very much aware of that, but the advantages of sending so many additional robots for redundancy and distributed measurements is very compelling.”

The micro-swimmers would measure gradients such as salinity, pH, pressure, temperature, and potentially even other chemical readings to determine whether there are any organic molecules in the ocean. But balancing these sensory capabilities with the engineering challenges posed by Europa make this potential mission ambitious for a number of reasons. First, it could take up to seven years to land on Europa and an additional three to six years to melt through the icy surface. So, ensuring that the micro-swimmers have maintained enough power to complete the mission means reimagining the battery system.

The distance the micro-swimmers have to travel also opens up the possibility that the sensors and instruments could lose their calibration and the readings could be less accurate. But Azadeh Ansari, co-investigator for SWIM and professor of electrical engineering at Georgia Tech, said, “Even if we know that there's error in the sensors, and they're not perfectly calibrated, averaging measurements across the collective swarm will still give us a better estimate of what the true environmental signal might really be.”

Lower gravity also poses unique challenges to the control system. Schaler said normally they would try to create passive stability within the system, but without a strong natural restoring force, the micro-swimmers could lose their balance.

“Europa’s gravity is only about 13 to 14 percent of Earth's gravity,” he said. “A lot of underwater robots now will rely on having the center of buoyancy above the center of gravity to provide passive stability. And when you have such low gravity, you don't actually get that benefit, so control and steering is extra tricky.”

Finally, they’ll have to figure out navigation. The micro-swimmers will have to stay in range of PRIME to continue to transmit data, so they’re looking into technologies such as an ultra-short baseline acoustic positioning system that could help them localize the bots in the water.

As if taking into consideration all of these limitations and unknowns wasn’t complicated enough, the team will also have to design most of the technology themselves. Schaler said that at this stage of development they are relying on commercial parts, which are often too big and would result in a prototype that is two to three times the size needed for this mission. So, miniaturizing the technology will be critical.

Watch Our Video: The Past and Future of Supersonic Transport

“Maybe I can't build it today,” he said. “But with enough funding and time, we will get pretty close to the design requirements.”

Funding for this project comes from a combined $725,000 awarded from the NASA Innovative Advanced Concepts program and is very much a “Blue Sky” grant. The idea is to aim high and take risks.

“It is definitely an ambitious mission, and we are in a dreaming phase for the next decade or two,” Howell said. “But NASA does have a very nice track record of showing that if something is physically possible, and there is a plausible technological path forward, then it can and should be done.”

As the team continues to develop their prototype, NASA’s 2024 Europa Clipper mission will embark to collect further data and insights of the icy moon from orbit, conducting detailed reconnaissance on conditions that may be suitable for life.